Waiting for one’s fiancé to set a date is never fun. Especially when it has now officially been years. Particularly when one is a veritable wallflower with little chance of anything better coming along. More so when said fiancé’s brother is paying particular attention to one’s life and causing all sorts of confusing emotions.

All Miss Augusta Snow wants is for Evan to return home and set the date. If that means trying as hard as she can to break out of her quiet temperament to gain his attention, then she’ll do her best.

But it seems she’s attracted the wrong brother’s attention…

The brooding Miles Stanton, Viscount Ashwick has always been quietly fascinating to her. She knows he was a little less than a gentleman in his past but she cannot help be intrigued now that he is showing interest in her wellbeing.

He only intended to protect his brother’s interests…

Miles always had a soft spot for Gus. However, everyone knew she was meant for his brother and all he wants is for her to be happy—especially with the specters of his past hanging over him and guaranteeing to bring trouble. He has to protect Augusta from doing something silly and somehow persuade Evan to cease being a fool and return home.

All the while ignoring his feelings for her…

Augusta’s plans to show Evan that she is not just some dull wallflower seemed doomed to fail and now Miles is back in her life and behaving…well…strangely. She cannot help but wonder if she has been hanging her hopes on the wrong brother this whole time.

They strolled in silence for a while. A gentle breeze brushed the ribbons of her bonnet, sending them curling around her face. She swept them aside with a little annoyed grunt and Miles tucked his hands behind his back to resist the temptation of sorting them out for her. When they came to where the path branched off and too far away from the party for their time together to be proper, Miles stopped. Augusta looked at him expectantly with dark eyes that made him wonder if she could see inside his soul—see quite how dirty and black it was. Though, she should have figured that out by now. There were few good men who would kiss their brother’s fiancé.

“I must apologize for that night…”

She blinked at him. “What night?”

The words hurt, jabbing straight into his heart like a pointed spear. Surely she remembered?

He cleared his throat. “The night where I…uh…kissed you.”

Her lips formed a lovely ‘o’ shape that made him want to take her face in his hands again and kiss her until he had her knees trembling and her body capitulated to him. Damn it. He shouldn’t have walked this far or taken this long to gather his courage. It would be far too easy to slip off somewhere without anyone noticing. He could dirty her skirts and muss her hair to his heart’s content.

God, he really was a cad.

“Anyway, I wanted you to know that I regret that action. Deeply. You…you are my brother’s fiancé.” His throat tightened over those last words. “Even if you were not, to kiss you like that, in public…it was utterly unacceptable.”

“You do not forgive me?” He shook his head and smiled. “Of course you do not. And I have no right to expect it.” He eyed her. “Gus, how is it you can make a man feel even more heartily ashamed of himself with but two words?”

“I do not mean to make you feel ashamed, I swear it.” She plucked a leaf from a nearby tree and twined it between her fingers, keeping her gaze lowered.

“I think perhaps you take a little pleasure in it.”

She lifted her head. “You tease me!” She flung aside the leaf. “You know I would never take pleasure in such a thing.”

“Perhaps.” He gave a half-smile. “But at least then I get a response from you.” 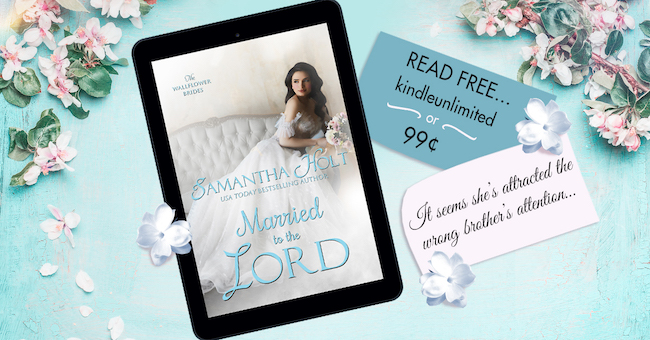 You can find Samantha on Facebook and join in her weekly Funday Friday giveaway: https://www.facebook.com/
samanthaholtromance

USA Today bestselling author Samantha Holt lives in a small village in England with her twin girls and a dachshund called Duke. If you’re not sure where to start why not try…