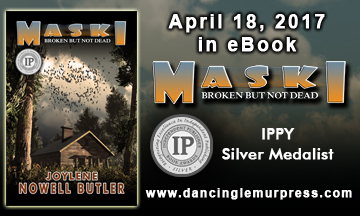 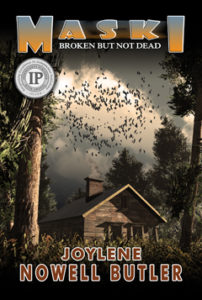 To the Breaking Point…

When Brendell Meshango resigns from her university professor position and retreats to her isolated cabin to repair her psyche, she is confronted by a masked intruder. His racial comments lead her to believe she is the solitary victim of a hate crime.

However, is all as it appears? After two bizarre days, the intruder mysteriously disappears but continues to play mind games with her. Taught by her mother to distrust the mainstream-based power structures, and with her stalker possibly linked to a high level of government, Brendell conceals the incident from the police. But will her silence keep her safe?

Then her beloved daughter, Zoë, is threatened and Brendell takes matters into her own hands. To save Zoë, Brendell searches for the stalker and confronts not just a depraved madman but her own fears and prejudices.

Smashwords
Excerpt from chapter 2 of Maski: Broken But Not Dead

Groggy, my eyelids weighed down by drug-induced sleep, I heard the distant cry of a lone eagle and felt like weeping with him. Was he calling to me? Attempting to say goodbye? Promising me that he’d fly overhead as my daughter spread my ashes across the water? Zoë had been silent when I stated that request.

A movement stirred the hairs on my neck. Shoes scuffed across the red carpet and the darkness transformed into dim light.

I struggled to find an acceptable response and realized warm blankets covered me. My arms were tied, but my legs were free. What did that mean? “I won’t. I promise.”

“Do you have any idea how much it pains me to punish you?” He moved closer, one arm behind his back. “Don’t take pleasure in it, Brendell. Thought it would be easy, but it’s not.”

Did that mean there would be no more pain? Oh, thank you!

“Actually, Brendell, think I could hurt someone who hurt you. Maybe that’s how I prove my loyalty. I could be your one and only personal avenger.”

His words seemed to bring him peace and he moved closer. He stopped at the end of my bed. “I could make your ex-husband pay for deserting you, Brendell.

“I don’t care about him.” I tried to raise my head.

“Can I trust you, Brendell?”

A tremor passed through me. I groped for the words that would appease him. He went to the nook and dragged back my only stool. He positioned it between the woodstove and the bed and sat.

“Prove it, Brendell,” he whispered, his right arm behind his back.

With his free hand, he smoothed the hair off my cheek. Then he grasped my chin so I couldn’t turn my head. He shifted, slipping his hand out from behind his back and resting it on the bed beside my head. I felt something hard and cold touch my cheek. It moved along my throat…touching my chin…my lower lip. I smelled…oiled metal. He tucked his thumb in my mouth and forced my lips apart. Oh dear God! He pressed the barrel of the gun against my teeth…between my teeth. I tasted cold steel.

I tried not to gag. I hoped someone other than Zoë found me.

He withdrew the gun and let go of my chin. The stool squeaked, and he walked to the kitchen window, his arms folded across his chest.

I cried without sound.

He grabbed something from the counter and returned to the side of my bed. I stiffening, expecting the excruciating pressure. But this time I felt a prick on the tender area of my neck while my mind registered on the word syringe.

“I’ll be watching. Listening. I know everything. All the time wondering, should I hurt Zoë? Make her pay for your crimes?” 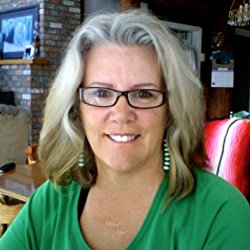 When Joylene’s father died in 1983, she wrote her first full–length manuscript to channel her grief. The seven-year process left her hooked and she began Dead Witness within a few weeks of finishing Always Father’s Child. Today Joylene is the author of four suspense novels: Dead Witness, Break Time, Mâtowak, and Maski.