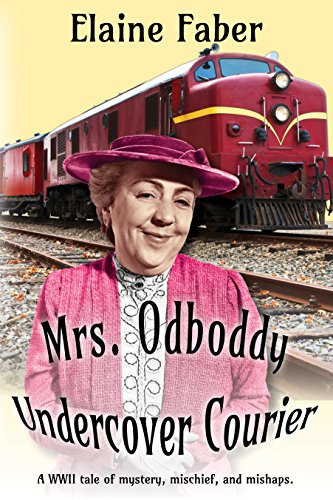 Asked to accompany Mrs. Roosevelt on her Pacific Island tour, Agnes and Katherine travel by train to Washington, D.C. Agnes carries a package for Colonel Farthingworth to President Roosevelt.

She meets Irving, whose wife mysteriously disappears from the train; Nanny, the unfeeling caregiver to little Madeline; two soldiers bound for training as Tuskegee airmen; and Charles, the shell-shocked veteran, who lends an unexpected helping hand. Who will Agnes trust? Who is the Nazi spy?

When enemy forces make a final attempt to steal the package in Washington, D.C., Agnes must accept her own vulnerability as a warrior on the home front.

Can Agnes overcome multiple obstacles, deliver the package to the President, and still meet Mrs. Roosevelt’s plane before she leaves for the Pacific Islands?

Mrs. Odboddy: Undercover Courier is a hysterical frolic on a train across the United States during WWII, as Agnes embarks on this critical mission.

My name is Agnes Agatha Odboddy. I live with my Siamese cat, Ling-Ling, and my granddaughter, Katherine. She lost her fiancé last year at Pearl Harbor but there’s a new doctor in town, and things look promising in the romance department. Katherine works at the Curls to Dye For Beauty Salon and does the hair and make-up at the Whistlemeyer Mortuary, here in Newbury. Now that the country is at war, as home front warriors, we must all be alert to Nazi- conspiracies and spies. As a patriot, I’m anxious to do my part for the war effort.

That’s probably why Colonel Farthingworth asked me to carry a package to President Roosevelt, since Katherine and I were headed to Washington to join Mrs. Roosevelt’s Pacific Island tour. Naturally, I assumed the package contained secret war documents too sensitive to travel through the mail. What better way to get them delivered than by a plump, red-headed, elderly, eccentric old gal like me? It was no surprise that a Nazi agent was on board the train, determined to steal my package. As an experienced WWI undercover agent, I felt confident that I could thwart any such Nazi attempt.

Mrs. Odboddy Undercover Courier mostly takes place on the train between California and Washington, D.C. and the people we meet, the risks I’m forced to take and the consequences of pitting my intuition and unlimited experience against a diabolical enemy agent. Along the way, we befriend two soldiers headed for training as Tuskegee airmen who must deal with Jim Crow laws in Tennessee. We meet the insensitive caregiver to a delightful child who steals Katherine’s heart, and experience first-hand J. Edgar Hoover’s bigotry and harassment of Mrs. Roosevelt. The rotten scoundrel!

All that may sound pretty routine, but I assure you, there is a laugh on every page. Katherine says my wild imagination always gets me into trouble but I’m never wrong…well…mostly never wrong. I know a Nazi spy when I see one…usually. There was that one time when I thought there was a Nazi plot involving stolen ration books…but that’s another story. (Mrs. Odboddy Hometown Patriot)

Mrs. Odboddy Undercover Courier is a hysterical romp on a train across the U.S.A. during WWII as I prove, yet again, that even old ladies can be home front warriors. In the exciting conclusion, when I come face to face with the enemy agent, I’m forced to acknowledge that even though my heart is in the right place, I’m not as young as I used to be. Katherine thinks my undercover warrior days are over. I told her, “Not by a long shot! Not as long as there’s breath in this old body.” Look for another adventure next year with Mrs. Odboddy – And Then There Was a Tiger!

“Gentlemen,” Jackson stopped beside Samuel and David. “This here is Mr. Josiah Feigleman, the conductor.”

A tall man with a red handlebar mustache leaned over the soldiers’ table. “If you colored boys would please come with me? We just crossed the Tennessee border, and we’re obliged to move you out of the dining car.”

Samuel set down his fork and glanced at David, “Told ya’. I’m surprised they let us get through Texas and Oklahoma. Get your stuff.” He stood and pulled his satchel from the overhead compartment.

David stood, following his friend’s example and pulled his gear down. He glanced toward Agnes and Katherine and touched his forehead. “Ma’am. Miss Katherine. It’s been a pleasure traveling with you. Thanks again for your kindness.”

Agnes flung down her napkin and lurched from the table. “What kind of nonsense is this? Jackson? Where in blazes are you taking my friends?” She grabbed his arm.

You tell them, Grandma! Katherine slid out of her seat and took her grandmother’s hand. “I agree with Grandma. What’s all this about?” Leave it to Grandma to call out an injustice.

Jackson patted Grandma’s hand. “It’s the law, ma’am. Ever since the border of Texas and through the connecting states, we been in Jim Crow country. Them’s segregation states. A Negro can go to jail if he’s seen commiseratin’ with a white woman, unless he’s got a good reason. In Tennessee, coloreds aren’t allowed to mingle with white folks in public places, such as restaurants, buses, or even here on the train.” He lowered his eyes. A muscle twitched beside his mouth. How hard it must be for him to bring such a dreadful message to the two soldiers.

Grandmother’s face paled. “I’ve heard about these laws, but I didn’t believe it would matter on the train. If they had such laws in Texas and Oklahoma, why didn’t you mention it before?”

Jackson shrugged, his gaze darting between Katherine and Agnes. “In them states, we can choose not to enforce the law if no one complains, but now we in Tennessee, they more strict. We gotta move these boys now or they could make trouble for the railroad.” He glanced nervously at the conductor.

Grandmother snorted, “I’ve never heard of anything so idiotic. It’s disgraceful. They’re United States soldiers!” Grandmother knotted her fists. She leaned forward until she was just inches from the conductor’s face. “How dare you treat these fine young men like this? Has anyone told you there’s a war on? David and Samuel are on their way to train as fighter pilots. They’re going to risk their lives for our right to sit here and eat chicken and strawberries!”

“Where ever you’re taking these boys, we’re going with them.” Katherine’s gaze swept the travelers in the dining room. “Is anyone else coming with me?” Her traveling companions lowered their heads, pretending they couldn’t see what was happening. Must be what the Roman citizens thought, seeing Christians thrown to the lions. Don’t get involved. Don’t make waves. There were plenty more hungry lions.

“Anyone else coming? Okay, then, Katherine and I will go alone.” Agnes said.

The conductor smoothed his mustache. “Sorry, ma’am. I can’t let you do that. The law states coloreds must be separate from whites. If you make a fuss, I’ll have to put you under citizens’ arrest, and turn you over to the authorities. They’re most unpleasant with folks who disobey the Jim Crow laws.”

David touched Agnes’s arm. “Please, Mrs. Odboddy. Don’t get into trouble on our account. We were getting off the train in Memphis, anyway. We’re taking a bus from there to the Tuskegee Air Base.”

“Now, don’t you worry about these boys, ma’am,” the conductor interrupted. “They’ll be most comfortable. We’ll just pull curtains around their seats in the back of the club car. That separates them from the others.”

“Curtains, is it? Wouldn’t want to offend the white folks by the sight of two Negro soldiers. Most considerate, I must say. It would have been so much easier to throw them off the train and make them walk!”

Katherine’s loosed Grandmother’s hand. She was right to object to such blatant discrimination, but at this point, they couldn’t risk an encounter with the law. Landing in a Memphis jail wouldn’t accomplish their mission. How selfish of me! Her cheeks burned at the thought. 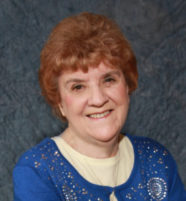 Elaine is a member of Sisters in Crime, Inspire Christian Writers and Cat Writers Association. She lives in No. Calif with her husband and four house cats (the inspiration for her three humorous cozy cat mysteries, Black Cat’s Legacy, Black Cat and the Lethal Lawyer, and Black Cat and the Accidental Angel).

Mrs. Odboddy’s character is based in no way on Elaine’s quirky personality. Two more Mrs. Odboddy adventures will publish in the near future. Many of Elaine’s short stories have appeared in magazines and multiple anthologies.