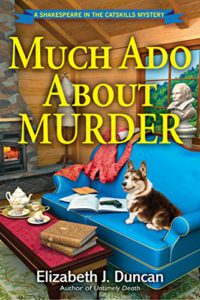 Much Ado About Murder
A Shakespeare in the Catskills Mystery #3
Crooked Lane Books
November 7, 2017

Costume designer Charlotte Fairfax has another murder on her hands as she prepares for the latest performance of the Catskills Shakespeare Theater Company, Much Ado About Nothing. The company’s steady growth enables them to cast star British actress Audrey Ashley, who arrives on scene to play the lead role of Beatrice. But things immediately get more complicated when Audrey insists the company replace the current director with new, up and coming British director Edmund Albright.

Edmund plans to change the popular romantic comedy, which alienates several people associated with the production. And the list of people he upsets only grows: the laid off former director, the hotel owner’s secretary, and even Audrey herself. Just as Edmund’s plans are about to come to fruition, his body is discovered on his sofa, holding a gun in his hand. His death is quickly ruled a suicide but Charlotte thinks otherwise. Why would Edmund, on the brink of greatness, kill himself? And in such an American way?

With a whole cast of characters to investigate, Charlotte is determined to unmask each one before it’s final curtain call on the whole production in award-winning author Elizabeth J. Duncan’s third Shakespeare in the Catskills mystery, Much Ado About Murder.

I had the pleasure of asking the main character of Much Ado About Murder, Charlotte Fairfax, some questions. It was a joy speaking with her, and I hope you’ll enjoy our interview together. Thank you to Charlotte’s author, Elizabeth, for facilitating the interview.

1) What is your favorite work by Shakespeare?
The Scottish play. There’s an old theater superstition that we never mention the actual name of the play in the theater itself. If you do, you must step outside, turn around three times, spit, and say the foulest word you can think of, and wait for permission to re-enter the theater. So just to be on the safe side, many theater folk never speak that one-word title.

2) If you could play any Shakespearean role, which role would you choose?
I’ve never fancied myself as an actor, so I’ve never thought about what role I would want to play. The part would have to be something safe and small so perhaps a servant with just one or two lines. It might be fun to be on stage, for once, to see the action from an actor’s point of view but I much prefer the view from backstage.

3) What is your favorite thing to do to unwind?
I love walking my dog, Rupert. Walking for pleasure seems pointless to me, without a dog by my side. I also like swimming, and my fiancé, Ray, and I enjoy watching quirky films, usually British, that never get a general release at the little cinema here in Walkers Ridge where we live. In fact, our first date was at that cinema.

4) If you could say one thing to your author, Elizabeth J. Duncan, what would it be?
Ray and I are planning a wedding, so I’d like a word with Elizabeth about that. I certainly hope I get a say in what I wear.

5) What is your favorite season in the Catskills?
Autumn, or fall, as you Americans call it. The red and gold leaves are spectacular, the food is brilliant, the days are cool and comfortable, and there’s a certain coziness as the nights begin to draw in, and before winter comes, that just makes you want to brew up a nice cup of tea, put a few chocolate biscuits on a plate, and curl up with a good book. 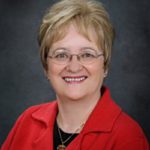 Elizabeth J Duncan is the author of two mystery series – Shakespeare in the Catskills and the Penny Brannigan mystery series set in North Wales. She is a two-time winner of the Bloody Words Award for Canada’s best light mystery and lives in Toronto.

One Response to “Much Ado About Murder by Elizabeth J. Duncan – Fast Five with Charlotte Fairfax”