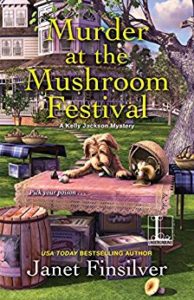 There’s a corpse among the chanterelles!

Redwood Cove Bed and Breakfast manager Kelly Jackson is hosting a cooking class during the Week of the Mushroom festival to attract guests, not drama. But soon after she finishes foraging for an edible mushroom species on sacred Native American land, a local newspaper reporter gets shot dead at the same site. With suspicions spreading like fungi in the quaint Northern Californian community over the culprit’s identity, Kelly and a savvy gang of sleuthing seniors known as the “Silver Sentinels” must uncover the truth about the secluded property before a tricky killer prepares another lethal surprise…

In the fall when the rainy season begins in Mendocino County, California, mushrooms pop up all over the area. The Mendocino County Mushroom, Beer, and Wine Fest was created to celebrate this time of year. It takes place in November. The event provides people numerous opportunities to learn about mushrooms and sample culinary delights. I attended one year to gather information for the fourth book in my mystery series, Murder at the Mushroom Festival. 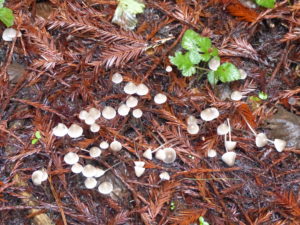 Mendocino County is home to more than 3,000 types of mushrooms. Some of the better known ones are chanterelles, porcinis, and morels. There are many hikes people can choose from to go foraging. Some types of mushrooms are poisonous to the point of being deadly, so it’s important to go with an experienced forager.

Food events abound with mushroom-centered themes. One example, served at The MacCallum House, is the Wild Mushroom and Winemaker Dinner. A six-course dinner with a seasonal menu is prepared and a mushroom expert gives a talk. The beer brewers are not to be left out. Last year one such offering was when The Mad Fritz Brewing Company paired with the Bewildered Pig to put their brews together with four courses of mushroom dishes. 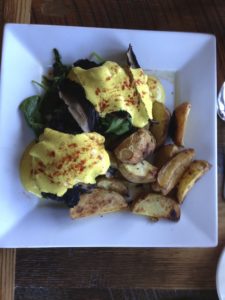 If you want something lighter than dinner, the Glendeven Inn built in 1867 offers an afternoon tea with mushroom tea sandwiches. In addition, the Stanford Inn’s Ravens Restaurant serves a medicinal mushroom breakfast, while the Mendocino College’s Culinary Arts Management Program serves appetizers. And…you guessed it…they’re all mushroom-based. For dessert there is candy cap mushroom ice cream, served at several locations. I’ve tried it, and it’s delicious. To me it has a maple syrup flavor. 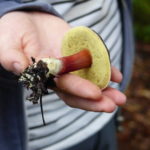 If you don’t feel like walking to find mushrooms, you can go horseback riding through areas that produce mushrooms. Outrigger canoes can be rented to explore the Big River Estuary as well as bikes to travel along forest paths. 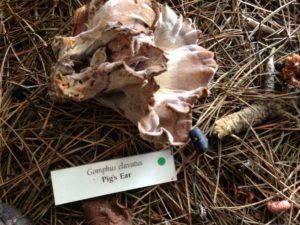 Mushroom displays are set up at numerous locations. The Ford House Museum has a live mushroom exhibit as well as artwork and photographs by local artists. The Discovery Gallery features works from twenty artists in a variety of media such as ceramics, painting, jewelry, and photography celebrating mushrooms.

Want a break from mushrooms? Take a ride on the historic Skunk Train that departs daily and is ongoing during the festival. Dogs are welcome for an additional price. Interested in kayaking? Last year a performance surf kayaking class was offered where people learned such moves as top turns, bottom turns, and diagonal runs. The Zoppe Italian Family Circus invites guests to its tent for acrobatics, clowning, and equestrian acts. The nearby town of Hopland hosts sheep dog trials.

As you can see, the Mendocino area mushroom festival offers a wide variety of activities. Even if you aren’t a mushroom lover or forager, you’ll find plenty to do in northern California during the event. 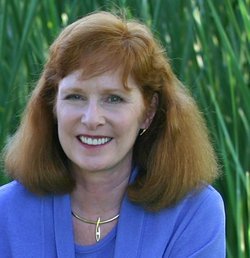 Janet Finsilver is the USA TODAY bestselling author of the Kelly Jackson mystery series. She worked in education for many years as a teacher, a program administrator, and a workshop presenter. Janet majored in English and earned a Master’s Degree in Education. She loves animals and has two dogs–Kylie and Ellie. Janet has ridden western style since she was a child and was a member of the National Ski Patrol. One of the highlights of her life was touching whales in the San Ignacio Lagoon. MURDER AT REDWOOD COVE, her debut mystery, was released on October 13, 2015. Her second book, MURDER AT THE MANSION, was released on June 7, 2016. Book 3, MURDER AT THE FORTUNE TELLER’S TABLE was released on March 14, 2017.