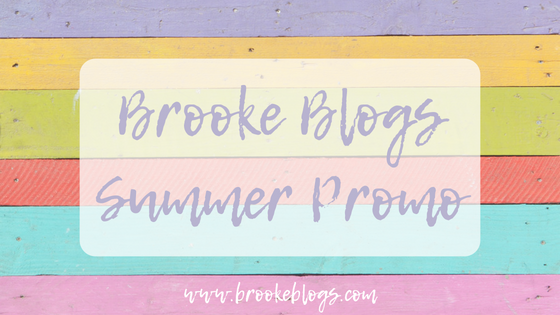 Welcome to the first in a series of summer guest posts on Brooke Blogs featuring authors and bloggers! If you are interested in participating in the Brooke Blogs Summer Promo series, please email me for more information. 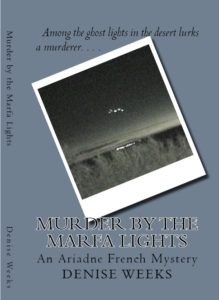 MURDER BY THE MARFA LIGHTS is the first in the Ariadne French paranormal mystery series. Interested in fiction that points an unusual lens at the world and examines fantastical as well as normal experiences? Murder by the Marfa Lights by Denise Weeks is a cozy/traditional mystery with techie stuff and dark ride/woo-woo stuff for all readers. Ariadne French and her older sister Zoe are co-sleuths in this suspenseful tale set among the Marfa Mystery Lights and a cast of eccentrics. Gentle humor in the style of Joan Hess, Donna Andrews, and especially Anne George’s “Southern Sisters” mysteries.

Ariadne French has waited almost a year to hear from her boyfriend, who left to build them a cabin “out in the woods.” To hear that he’s dead of a heart attack in Marfa, Texas–and that he has left her all his worldly goods, including a cabin he built with his own hands–shakes her to the core. She leaves for Marfa (against her sister Zoe’s advice) to help settle the estate.

Aaron had apparently been trying to sell his revolutionary encryption software to several interested corporate and government buyers. But there’s no trace of the software on his computer, and Ari suspects it has something to do with Aaron’s death. Where is the money that he was paid in advance by several buyers? As she searches for the source code (she’s certain he backed it up and had several copies) and tries to build a case to show he was murdered, she finds herself in an exotic world of religious cults, a smarmily charming minister, and a mystic-minded Cherokee lawyer. After enduring everything from a chase through the desert by the Marfa Mystery Lights to some very real death threats from Aaron’s erstwhile heirs, Ari finds herself recruiting her sister Zoe to help her put together the pieces and solve the ultimate mystery: why Aaron was killed, and who killed him.

Ari’s life isn’t a rollercoaster ride like many of today’s action-suspense mysteries, nor is it a “crafts vendor with craft vendor friends” like today’s cozies, but is more of a “dark ride” like the old Spelunker’s Cave at Six Flags used to be–blind turns, murky, weird visions, a sudden lightning/thunderstorm, rolling in a barrel, insights coming out of strangeness. There are clues or red herrings buried in the scenes that are “about” something else on the surface (with suspects and witnesses), but here it’s a lot more subtle and does not sacrifice character and emotion to action. This is definitely not all action thriller, and I wouldn’t want to disappoint readers. Fans of Vince Flynn and James Patterson might find reasons to throw it across the room. But if you like character-driven stories with more depth, or you are a fan of Diane Mott Davidson, Donna Andrews, Judith Van Gieson, or Gillian Roberts, you might like this one. You can count on quite a bit of Texas flavor and some eccentric characters.

I was at my sister’s house painting her west dining room wall Tahiti Orange when her landline phone shrilled.

“Let the machine pick up.” Zoe stepped back to evaluate our progress. She was doing the other three walls Holstein Cream. “It leaves streaks when you paint those W’s. I don’t care what they did on ‘Extreme Home Makeover.’ Just go straight up and down, overlapping the edges a bit.” She pushed back her dark hair, leaving a skunk-streak of vanilla paint through her bangs.

“That’s probably for me.” I started backing down the stepladder.

“Who’d be calling you here?”

“I forwarded my desk phone. It’s my night to cover supervisor calls on the help desk.”

“You and those stupid fish tanks.” She glared.

Evading her disintegration ray, I rushed down the hall of her 1920s cottage into the guest room where I could have some privacy to answer the call. “Aqualife Tech Support, The Fishes’ Lifeline. This is Ari. How may I help you?”

Pretty good: he hadn’t entirely mangled my first name, the way most people did the first time. My name is Ariadne, pronounced “R. E. Oddney,” as if I were an initial-author, like C. S. Lewis or J. K. Rowling.

I didn’t recognize the voice. It was a warm, resonant, and infinitely sensual bass that threatened to vibrate my entire body along with my eardrum. I shook off its seductive effects as best I could and assumed a professional tone. “This is Ariadne French. How can I help you?”

“What’s handwritten?” My old paranoia danced in the background. If this were a customer who’d spoken to me in the past, I could only hope I hadn’t given unclear or misguided advice that had resulted in a tankful of floaters and a house full of howling, broken-hearted children who’d named every one of the fish and had trained several of them to do tricks and come when called.
“Do you have a specific fish problem I can help you solve?”

My chest tightened. Surely he wasn’t another bill collector. The last thing I wanted was for Zoe to know they were still calling my work number.

Over a year ago, I had signed my nephew Ricky’s admission paperwork without a second thought. We had been desperate for him to begin the experimental treatments for his rare cancer. My sister had been incapable of rational thought, and probably couldn’t have spelled her name, let alone sign on the promise-to-pay line. I hadn’t been worried about money at the time; I had certainly never imagined that so much of the expense would go unpaid.

Before I could get too agitated, the voice set me straight. “I guess I should’ve introduced myself. My name is Gil Rousseau, Aaron’s neighbor and his pastor.”

I felt my heart thud against my breastbone. “Aaron Beecroft?”

My one true love. Or so I had thought, up until he’d faded out of contact with me a few months ago.

That never meant anything good. In fact, it normally meant only one thing. “No,” I said involuntarily.

Gil cleared his throat. “I’m sorry to be the one to have to tell you, but Aaron has passed away.” 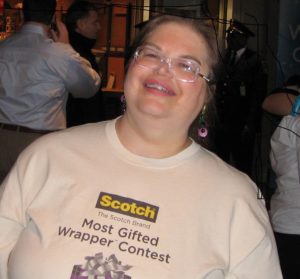 Shalanna Collins (the fantasy side of Muggle author Denise Weeks) has been writing since she could hold a crayon. Nevertheless, she holds bachelor’s degrees in computer science and in mathematics (with an English minor) from SMU, because her family didn’t want her to be unemployable like Aunt Fannie Belle, who never got any of her pornographic romance novels published. Novelist, pianist, belly dancer, baton twirler (but no fire batons ever again, by order of the Renner Volunteer Fire Brigade), and amateur radio operator, she lives happily in Richardson, Texas, with her devoted, long-suffering hubby.

She has worked as a software weenie, soft-serve cone maker at Dairy Queen (she perfected that little twirl on the top of the dipped cone), and secondary school math tutor. However, the entire time she was really a novelist–watching, scribbling, plotting.

At age six, she discovered that her favorite books had not fallen from the sky whole like the Bible and the CRC Math Tables, but were written by mortal men and women. That very moment, she determined to tell the stories that she acted out with her stuffed animals during the lonely-only-child days before the Internet. Because books are important. They are worthy of your time and most of them have something to teach you. Whether a story is “slow-moving” or “gets right to the shooting,” it’s usually something that will feed your soul. That’s why she’s spending her life writing them.

Her favorite foods are curried yak, chocolate, and French fries. She knows (but is not telling) a plethora of alchemical and occult secrets. Homeland Security has identified her as a person of interest. (Okay, just kidding. She doesn’t really eat curried yak.) She is currently at work on yet another novel. Visit her at deniseweeks.blogspot.com and shalannacollins.blogspot.com. See her website at http://shalanna.wix.com/aprilmaybejune. 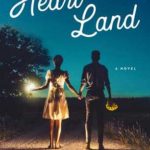