I received an electronic copy of Murder by Syllabub by Kathleen Delaney in exchange for a fair and honest review. My opinion was not influenced in any way. No compensation was received for this post. 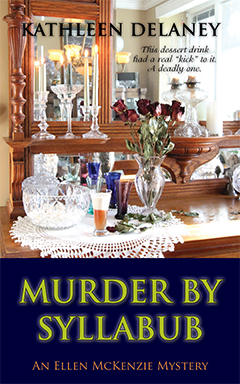 A ghost in Colonial dress has been wreaking havoc at an old plantation house in Virginia. The house is owned by Elizabeth Smithwood, the best friend of Ellen McKenzie’s Aunt Mary. Mary is determined to fly to the rescue, and Ellen has no choice but to leave her real estate business and new husband to accompany her. Who else will keep the old girl out of trouble? When Ellen and Aunt Mary arrive, they find that Elizabeth’s “house” comprises three sprawling buildings containing all manner of secret entrances and passages, not to mention slave cabins. But who owns what and who owned whom? After Monty—the so-called ghost and stepson of Elizabeth’s dead husband—turns up dead in Elizabeth’s house, suspicion falls on her. Especially when the cause of death is a poisoned glass of syllabub taken from a batch of the sweet, creamy after-dinner drink sitting in Elizabeth’s refrigerator. Monty had enemies to spare. Why was he roaming the old house? What was he searching for? To find the truth, Ellen and her Aunt Mary will have to do much more than rummage through stacks of old crates; they will have to expose two hundred years of grudges and vendettas. The spirits they disturb are far deadlier than the one who brought them to Virginia. Murder by Syllabub is the fifth book of the Ellen McKenzie Mystery series.

Mildred leaned back against the drain board, as if she needed it to prop her up. “Do you think he’ll be back?”
I set the dish on the drain board along with the other rinsed dishes. “You mean the murderer?”
Mildred nodded.
I’d wondered the same thing. “I think it was Monty prowling around upstairs, looking for something. Why he was dressed like that, I can’t imagine, but I don’t think he found whatever it was he was looking for. The only reason I can think of for both Monty and whoever slipped him the poison to be here is they were looking for the same thing. I don’t think they found it. So, yes, I think whoever it is will be back.”
Mildred nodded. “I think so, too. That crate was no accident.” She paused before going on, her voice filled with apprehension. “You know, McMann isn’t going to buy the mysterious prowler story. He’s going to take the easy way out. Elizabeth fed Monty the poison before she left for the airport and we’re protecting her.” She sighed deeply and turned to the dishwasher. “Might as well load this. Can you hand me that bowl?”
She opened the door, pulled out the top rack and froze. “How did that get in here?”
“What’s the matter? Oh no.”
We stood, frozen, staring at the immaculately clean crystal glass, sitting on the top rack in solitary splendor.
“That’s one of the old syllabub glasses.” Mildred turned around to look at the glasses on the hutch and returned her gaze to the dishwasher. She pulled the rack out all the way but the dishwasher was empty, except for the one glass.
I’d had a close enough look at the glass next to Monty to know this was from the same set. “It’s the missing syllabub glass.”
“Missing?” Mildred’s hand went out to touch it, but she quickly withdrew. “Where are the others? Cora Lee and I packed these away years ago. There were eight of them. How did this one get in here?”
“Noah didn’t tell you?”
“That boy only tells me what he wants me to know. What was it he should have told me?”
“The set of these glasses were on the sideboard in the dining room where Monty was killed. Six of them. One was beside Monty with the remains of a sticky drink in it. That made seven. One was missing. The one the murderer used.”
We stared at each other then back into the dishwasher. “That’s got to be the missing one, right there.” Mildred took a better look. “It’s clean. Someone’s trying to frame Elizabeth.”

😀 My review of Murder by Syllabub by Kathleen Delaney is summed up by that super happy face. This was such a fun cozy to read. I absolutely loved the paranormal twist to the story. It was the perfect book to read at this time of year. Kathleen Delaney gives us a perfect plot with well-developed characters. There’s a believable story line and that’s a big part of whether I like a story or not. This is definitely worth reading! 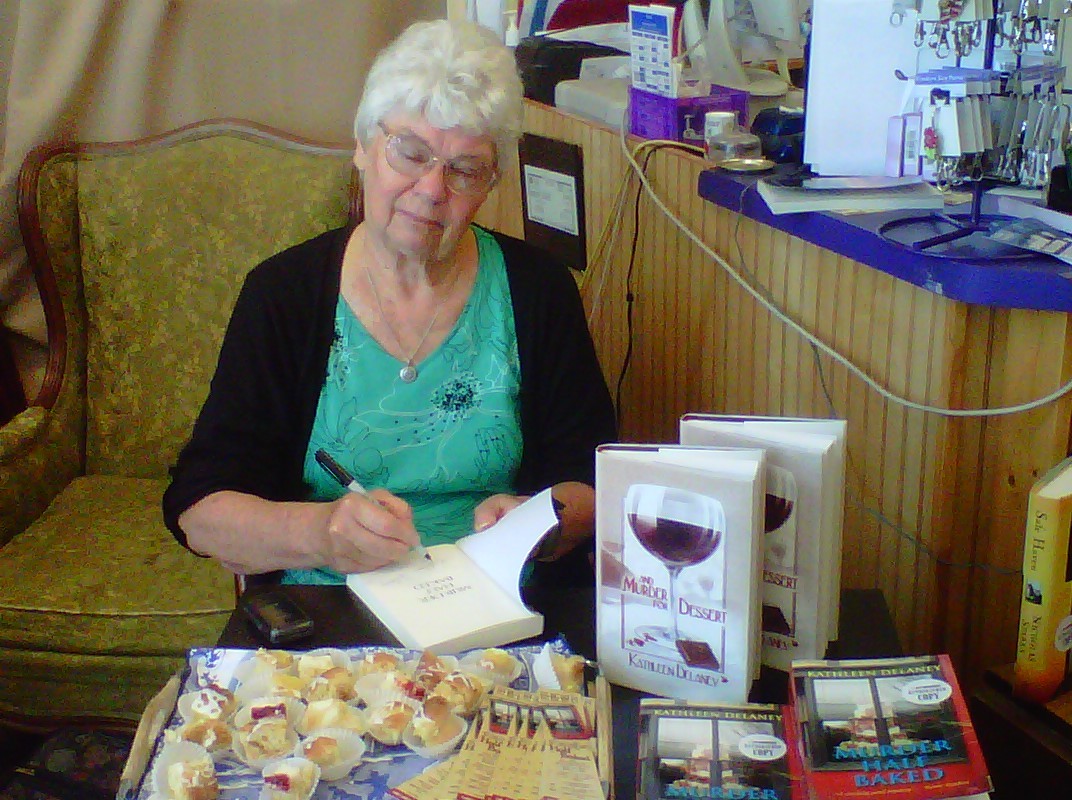 Kathleen Delaney has written four previous Ellen McKenzie Real Estate mysteries, but has never before transported her characters out of California. A number of years ago she visited Colonial Williamsburg and fell in love. Long fascinated with our country’s history, especially the formation years, she knew she wanted to set a story there. Another trip with her brother and sister-in-law solidified the idea that had been rolling around in her head but she needed more information. A phone call to the nice people at Colonial Williamsburg provided her with appointments to visit the kitchen at the Payton Randolph house, where she got her first lesson in hearth cooking and a meeting with the people who manage the almost extinct animal breeds the foundation is working to preserve. A number of books purchased at the wonderful bookstore at the visitor’s center gave her the additional information she needed and the story that was to become Murder by Syllabub came into being. Kathleen lived most of her life in California but now resides in Georgia. She is close to many historical sites, which she has eagerly visited, not only as research for this book but because the east is rich in monuments to the history of our country. Luckily, her grandchildren are more than willing to accompany her on their tours of exploration. You can find Kathleen on the Web at delaney.camelpress.com.

No Responses to “Murder by Syllabub by Kathleen Delaney”