This is a sponsored conversation from Mums the Word Network and The Stork OTC. All opinions are my own.

One of the most exciting things is seeing those two lines show up on a positive pregnancy test. Your whole world changes in an instant. It is scary and exhilarating. I have had the blessing of having that experience twice. I’d love to share my birth story with my younger daughter, Natalie.

In January of 2011, I realized my period was late. We were not trying to get pregnant and I was not expecting the pregnancy test to be positive. I took the test and I was completely in shock to see a positive result. With those two lines, my heart expanded. My second pregnancy was worlds different than my first pregnancy. I had some difficulties throughout my pregnancy. But I would not have traded it for anything.

My due date was September 11th. I saw my doctor on August 22nd, and after checking me, felt that it was possible I would be having my daughter sooner rather than later. I was slightly dilated and had been having contractions off and on. He wanted to see me early the next morning to see if there had been any change.

Early on the morning of August 23rd, my boyfriend and I headed to the hospital to be checked out in The Birth Center. They hooked me up to the monitors at around 7:00 am and we awaited my doctor’s arrival. When he checked me, I was more dilated than I had been the previous afternoon. Due to some of my earlier difficulties, and the fact that I was considered full-term at 37 weeks + 3 days, the doctor decided to keep me. I was checked in as a patient and hooked up to an IV with some Pitocin to help things along.

My contractions increased in intensity and began coming regularly. I was still feeling pretty good. My boyfriend and I were in the room together just talking. The television was on, but we weren’t really paying attention to it. I received my epidural and began riding out the contractions a little easier. My stepmother came over early in the afternoon to take photos. She had been with me for my first delivery as my Lamaze partner and it was nice to have her in the room for my second delivery.

Something interesting did happen not too long before I delivered my daughter. The bags on my IV bag were swinging slightly, and I could feel my hospital bed moving. There was an earthquake in Virginia at 1:51 PM and we could feel the aftershocks in eastern Ohio! I was concerned they would evacuate the hospital and I would be delivering my daughter on the sidewalk. My contractions were coming closer and closer together and it was nearly time to deliver.

Finally, the doctor arrived and I began pushing. It wasn’t long before my beautiful second daughter, Natalie, was born. She was placed on my chest for skin-to-skin contact and my heart just melted.

I absolutely love being a mother. It is the greatest joy of my life. I would love to have another child. Conception doesn’t always come easily. When we are ready for our next child, I want to conceive as quickly as possible. That’s where The Stork OTC comes in. This at-home conception aid can be purchased at your local CVS or Walgreens in the family planning section, near the ovulation test kits. If you are having difficulty conceiving, The Stork OTC can help you build your family naturally.

The Stork OTC assists you in your chances of getting pregnant.
No doctor’s appointments. No prescriptions. No drugs. No brainer.

It’s a New Year, with New Chances for Pregnancy. By planning ahead and eating a nutritious diet, having pre-pregnancy checkups, exercising, and taking vitamins, you can set yourself up for the best possible chances of pregnancy. Adding in The Stork OTC can improve your chances.

The Stork OTC is holding a fun Twitter party! I would love to see you participating on January 26th at 8pm EST. You can participate in the Twitter party with the hashtag #2017StorkOTCjourney ~ I’ll see you there. 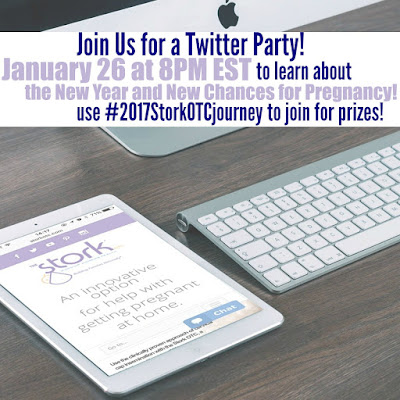