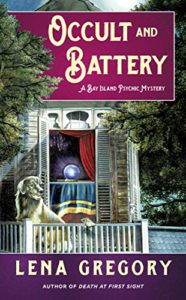 Cass Donovan uses her skills as a former psychiatrist to get away with pretending to be psychic, but she’s not about to let anyone get away with murder...

The outlook is not so good for Cass’s psychic shop, Mystical Musings. With winter winds discouraging tourists from riding the ferry from Long Island to Bay Island, Cass hopes to draw in more customers by hosting a murder mystery weekend, complete with a séance, in a supposedly haunted mansion.

But Cass begins to lose her spirit when her ex-husband shows up, along with his fiancée—Cass’s ex-best friend. Then, after one of the guests is found dead, a blizzard blows in, trapping everyone inside with a murderer. Now Cass must divine who did the deed before her reputation and her livelihood fade away.

Also by this author:


Pros and Cons of Living on Bay Island
by Cass Donovan

I own a small psychic shop on Bay Island, a small island nestled between the north and south forks of Long Island, New York. Though I grew up on Bay Island, I’ve spent the past seventeen years—up until last year, anyway—living in New York City. Manhattan to be exact, which technically is still an island but so different from Bay Island, it may as well be a million miles away instead of less than a hundred.

Life on Bay Island moves at a much slower pace, and I can’t say I miss the hustle and bustle of the city. Since I live just a few miles down the beach from my shop, I often walk to work. If it’s warm enough, I take my shoes off and walk along the surf. During the summer months, the beaches are crowded, even fairly early in the morning, but in the spring and fall I’m often one of only a few people strolling or jogging along the beach. Staring out across the bay waters brings a sense of peace I never managed to find anywhere else.

Bay Island is small. You can drive across the entire island in half an hour, less if there’s no traffic in town. Although summer brings flocks of tourists, during the remainder of the year the island is left mostly to the locals. Because it’s a small community most of the year, everyone pretty much knows everyone else, which can be a pro or a con, depending on how you look at it. When my parents passed away last year, and I returned home to see to the arrangements, the town mourned with me. The florist, whom I’d gone to high school with, had come around the counter to offer a hug and cry with me. The funeral director’s expression had been a grimace of true grief, rather than the grim but distant expression he usually would have deemed appropriate for such a somber occasion. And the priest had concluded the ceremony with a hitch in his voice. That warmth is what kept me on Bay Island after the funeral, the sense of home and community you just can’t find in a big city.

The only major con I can think of for living on Bay Island, though, is the isolation. Since we’re surrounded on all sides by water, with no bridges to the mainland, the ferry is the only means of public transportation to and from the island. While that’s nice most of the time, it can be a problem as well. Tourists never stop in and visit the shops on their way through to somewhere else—either they are visiting Bay Island, or they’re not—which makes it difficult to make ends meet during the winter months. But I’ve come up with an idea I hope will get me through this winter. After all, who doesn’t love a séance in a haunted house? And storms present a problem. Hurricanes and snowstorms close the ferry down, leaving Bay Island to fend for itself.

But all in all, I love living in the small island community. I can always stop in the local diner, bakery or deli and get the latest gossip. I have close friends I wouldn’t trade for the world. And I have the shop I’ve worked so hard for.

What do you think? Would you like living on an island?

Occult and Battery by Lena Gregory is the second book in the Bay Island Psychic Mystery series. In this installment, Cass is hosting a psychic weekend in an old ‘haunted’ home on Bay Island. With a blizzard and a dead body, things quickly get out of hand.

I liked this second book even more than the first book in the series. I loved getting to visit with Cass, Bee, and Stephanie again. The idea of being snowed in with a murderer among the characters added a great element of intrigue to the mystery. This cozy was fast-paced and I didn’t want to put it down once I started. I had a lot of fun reading this mystery and I have this series on my must-read list. Great characters in an awesome setting makes this story the perfect cozy to curl up with. 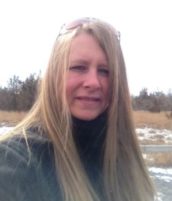 Lena grew up in a small town on the south shore of eastern Long Island, where she still lives with her husband, three kids, son-in-law, and five dogs. Her hobbies include spending time with family, reading, jigsaw puzzles, and walking. Her love for writing developed when her youngest son was born and didn’t sleep through the night. She works full time as a writer and a freelance editor and is a member of Sisters in Crime.

To learn more about Lena and her latest writing endeavors, visit her website at http://www.lenagregory.com/ and be sure to sign up for her newsletter http://lenagregory.us12.list-manage.com/subscribe?u=9765d0711ed4fab4fa31b16ac&id=49d42335d1. 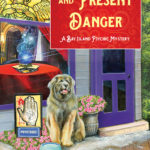