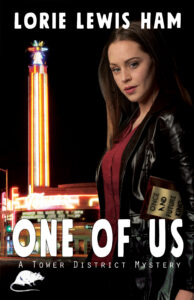 At 35, children’s book author Roxi Carlucci finds herself starting over again after her publisher drops her book series. With no income, she has to pack up her life on the California Coast, along with her pet rat Merlin, and move in with her cousin, P.I. Stephen Carlucci, who lives in Fresno, CA. The one redeeming factor is that Stephen lives in the Tower District—the cultural oasis of Fresno.

Stephen talks Roxi into helping out with a community theatre production, which is also a fundraiser for a local animal rescue. Little did she know that someone would be murdered during a rehearsal, and that she and Stephen would be hired to find the killer. The killer has to be one of Roxi’s new acquaintances since the theatre was locked at the time of the murder, but no one seems to have a motive. How can they solve a murder without a motive? Could the local gossip website hold any clues? Can they stop the killer before they strike again?

My new book, One of Us, features Roxi Carlucci. When I first started to write a book featuring her, I was going to have her run a small animal rescue. However, by the time I was able to get serious about the book, the mystery genre was overflowing with books involving animal rescue, so I wanted to do something different.

At the beginning of One of Us, Roxi finds herself starting over. She had been writing children’s books and running a small animal rescue, but her publisher dropped her books and her roommate got married and moved out, leaving her with a mortgage payment and no income. Not having many options, she closes the rescue, rents the house out to someone, and moves in with her cousin who lives in the Tower District in Fresno, California. The Tower District is the arts district in Fresno, so it seemed natural for Roxi to do something involving the arts. Right away, she is talked into volunteering with a community theatre that is doing a play as a fundraiser for an animal rescue. But still no actual job.

When someone is killed during rehearsal, Roxi’s cousin Stephen, who is a private investigator, takes on the case of finding the killer. He offers Roxi a part-time job working with him to solve the murder. The mystery delves deeply into the arts community of the Tower District and by the end of the book, Roxi decides to start an entertainment podcast focusing on the Tower District. But since that doesn’t pay the bills, she also continues to work for Stephen. So essentially, she becomes a podcasting P.I.

You may wonder how I landed on podcasting. To begin with, I was a big fan of podcasts long before it became the “in” thing to do. It is also something that I know a bit about. For the past three years, I have been producing a podcast called Mysteryrat’s Maze. We feature mystery short stories and first chapters read by local actors—an excerpt from One of Us was featured in a recent episode. During this time, I have learned a great deal about podcasting, so it seemed an easy choice. However, I didn’t want to make her a true-crime podcaster—that too is becoming very common in mystery fiction, plus I felt it might make for a darker sort of book than I wanted to write.

Another option I had considered was making Roxi a Booktuber. For anyone who doesn’t know what that is, that is someone who has a YouTube channel that focuses on books and reading. YouTube is something else I know a bit about. For the past several years, my oldest son Jayce has been a YouTuber—his focus has changed through the years, but mostly he talks about anime, books, and video games. Through that connection, I became a big fan of YouTube and have attended VidCon with my son several times. VidCon is a YouTube/online video convention. The convention was a lot of fun, and I learned a lot about how the industry works. For a while, my online magazine Kings River Life even had its own YouTube channel.

Not wanting to completely abandon the YouTube idea, I ended up making one of the other characters in One of Us a Booktuber, and it is something I will delve into much more in book two. Book two will be taking place at a literary conference in the Tower District, which Roxi will be covering as an entertainment podcaster.

So that is how Roxi became a podcaster. I hope you will check out One of Us and follow Roxi on her adventure!

Lorie Lewis Ham lives in Reedley, California and has been writing ever since she was a child—her first stories were about her stuffed animals. Her first song and poem were published when she was 13, and she has gone on to publish many articles, short stories, and poems throughout the years, as well as write for a local newspaper. Four out of 5 of her previously published mystery novels feature gospel singer Alexandra Walters and are set in the San Joaquin Valley. Those books were inspired by the many years she spent traveling and singing gospel music with her family. One Of Us is the first in a brand new mystery series set in the Tower District of Fresno, California featuring podcaster and part-time detective Roxi Carlucci. Lorie has also been the publisher of the online magazine Kings River Life for the past 11 years (kingsriverlife.com), and of its sister website KRL News & Reviews (krlnews.com). She also launched a mystery podcast called Mysteryrat’s Maze (mysteryratsmaze.podbean.com) 3 years ago which features mystery short stories and first chapters read by local actors, including the first chapter of this book. You can find the podcast on Apple Podcasts, and all of the other usual places. You can learn more about Lorie on her website mysteryrat.com and find her on Twitter @mysteryrat and Facebook. Another way to keep up with Lorie’s writing is to subscribe to her newsletter—you can find info on doing that on her website.

Lorie has been married to Larry for 30 years and they have 2 grown children—Jayce and Joseph Ham. She currently has 5 cats (Merlin, Sam, Dean, Sidney, and Willow), 4 dogs (Lestat, Huey, Xander, and Phoebe), and a pet dwarf rabbit (Sherlock). For many years, she worked in pet rat rescue and has had many pet rats of her own over the years.

One lucky winner will receive an eBook copy of One of Us by Lorie Lewis Ham. For your chance to win, please be sure to comment on the blog post at brookeblogs.com and then fill out the form below. If the form does not load, please CLICK HERE. Good luck!

This giveaway will end at 11:59PM EST on September 29, 2021. Winner will be randomly selected from all eligible entries. Prize fulfillment of eBook will be via Bookfunnel after the conclusion of the book tour.