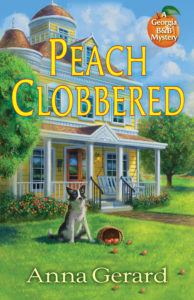 What’s black and white and dead all over? Georgia bed and breakfast proprietor Nina Fleet finds out when she comes across a corpse in a penguin costume.

Nina Fleet’s life ought to be as sweet as a Georgia peach. Awarded a tidy sum in her divorce, Nina retired at 41 to a historic Queen Anne house in quaint Cymbeline, GA. But Nina’s barely settled into her new B&B-to-be when a penguin shows up on her porch. Or, at least, a man wearing a penguin suit.

Harry Westcott is making ends meet as an ice cream shop’s mascot and has a letter from his great-aunt, pledging to leave him the house. Too bad that’s not what her will says. Meanwhile, the Sisters of Perpetual Poverty have lost their lease. Real estate developer Gregory Bainbridge intends to turn the convent into a golfing community, so Cymbeline’s mayor persuades Nina to take in the elderly nuns. And then Nina finds the “penguin” again, this time lying in an alley with a kitchen knife in his chest.

A peek under the beak tells Nina it’s not Harry inside the costume, but Bainbridge. What was he doing in Harry’s penguin suit? Was the developer really the intended victim, or did the culprit mean to kill Harry? Whoever is out to stop Harry from contesting the sale of his great-aunt’s house may also be after Nina, so she teams up with him to cage the killer before someone clips her wings in Peach Clobbered, Anna Gerard’s charming first Georgia B&B mystery.

Big woofs, everyone. My name is Matilda, also known as Mattie. I’m a blue Merle Australian shepherd dog, which means I’m black and gray and white. I also have one blue eye and one brown eye and am really fluffy. I think I’m a pretty stunning canine, myself…and my human, Nina Fleet, agrees. She was surprised to find a dog like me at the local animal shelter where she adopted me. If I could talk human, I’d tell her that I was there because I ranned away from my original caretaker. He was a bad man who tried to make me into a hunting dog.

Huh, any halfway smart creature knows that we Aussies are herding pups. That means we chase other animals just enough to make them go where they’re supposed to go. I wouldn’t hunt, so the bad human yelled at me and kicked me hard. So I bitted his foot and jumped over the fence before he could kick me again. I ran and ran like a greyhound until I was too far away for him to ever catch me. The next day, a nice human lady found me hiding in her yard and took me to a place that helps canines like me find new homes. I never did see that bad man again!

Now I have a great place to live with Nina, who is pretty clever for a human. And, we just moved from a big city to a little one, and our new house is even better than the old one. I have a huge yard to run in, and a garden with paths and a fountain where I used to pretend to herd sheep. But I don’t have to pretend anymore, because now I have an official herding job.

Bark bark, I’m in charge of the humans who come to live at our house for a few days. Nina calls this being a bed and breakfast. I’m not sure about the bed part, but the breakfast thing is great. That’s because Nina isn’t that good of a cook, so she has the food brought in when we have guests. And the human who does all the cooking is the puppy’s paws (that means excellent in canine-speak). I like his mini-quiches best, and I always manage to steal one from a human who isn’t watching his plate close enough. So far, no one has caught me…Bark Out Loud!

Most of the humans that stay with us are really nice, so it’s easy keeping my blue eye on them. But my favorites so far were the old human ladies that Nina called nuns. They dressed in black and white like me, and they were very smart about canines. I overheard them talking about having goats, so I guess that was the interesting smell that was still on their shoes. It made me want to herd them, BOL!

I’m not supposed to talk about what happened when they stayed with us (Nina says you have to read the book about it), but I can tell you that I helped Nina catch a bad human who stuck a big sharp knife-thing in another human. Of course, I didn’t get the credit for all my hard work, but I didn’t do it for a good dogand a pat on the head. I did it because that’s just the kind of thing we canines do. But I can invite you to come stay with me and Nina. And if you do, I promise I won’t steal a quiche off your breakfast plate.

Okay, maybe I’ll only steal one. 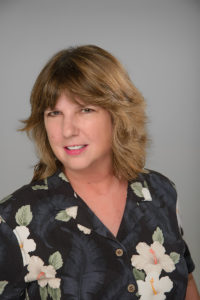 Diane is a member of Mystery Writers of America and has served as the 2018 and 2019 Chapter President of the MWA Florida chapter. In addition to her mystery writing affiliations, she’s a member of the Cat Writers’ Association and belongs to the Palm Beach County Beekeepers Association. She’s a native Texan with a degree in Journalism from the University of Oklahoma, but has been living in the West Palm Beach FL area since 2006. She shares her “almost in the Everglades” home with her husband, dogs, cats, and a few beehives. Learn more about her books at www.dianestuckart.com