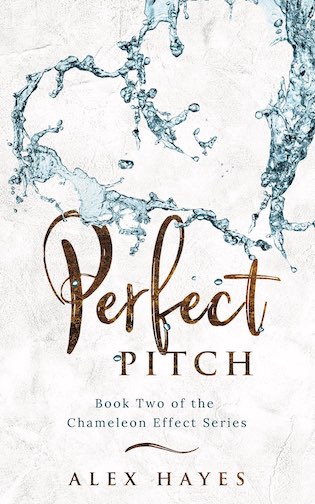 All Dean wants is to escape…

But he can’t leave his younger brother, Ty, in the care of their alcoholic mother. And when their abusive father shows up, Dean has to get Ty out. Which means joining Shri — his best and only friend — in taking a job out of state and breaking the law by stealing his brother away.

Cadi’s life is almost back together after Dean blew it into a million pieces. She’s come to terms with her life as a shape-shifter — well, almost. She’s still trying to wrap her head around the fact that a vicious enemy is out to destroy the remnants of her people.

As if Cadi doesn’t have enough to deal with, Dean’s about to land on her front doorstep, forcing her to decide whether to let him into her secret world or slam the door in his face.

The Chameleon Effect series, starring shape-shifter teens with extraordinary superpowers, is sure to appeal to Young Adult and New Adult readers who enjoy romance with a paranormal twist.

Excerpt #3:
At three, I text Ty and get no answer. After fifteen minutes of silence, I head home.

Dad’s truck is gone, so I park my car in its place—my space—as if that will somehow keep him from coming back. I kill the engine.

Pepper’s continuous barking from over the backyard fence makes me stiffen. Why would Ty leave him outside making such a ruckus?

The answer is, he wouldn’t.

I jog to the front door, trying to convince myself nothing’s wrong. Ty’s wearing his earbuds, that’s all. Or he’s in the shower.

“Ty?” I shout as I burst through the door.

Still nothing. The parents must have taken him out to an early dinner is all, but I hurry to his bedroom door, anyway, heartbeat racing.

Shit! I thrust open the door and face total devastation.

Broken pieces of wood and wire lay scattered across the floor. The shattered remains of Ty’s guitar.

Stifling a gasp, I turn toward the bed. Ty lies curled in a ball, his face hidden in the pillow, crying.

“Ty?” I bend over him, rub his shoulders and gently peel his fingers from a death grip on the bedding.

He twists in my arms and buries his face into my chest.

“What happened?” I whisper, trying to keep some semblance of calm in my voice. “Did he hit you?”

When he doesn’t answer, I push Ty far enough away to see his face. Blotches of red mar his features, but no swelling or bruising.

I swallow. “Tell me if he touched you.”

“He pu-pu-pushed me.” Ty’s slender frame trembles as I pull him close. “And b-b-broke my guitar.”

I squeeze my eyes shut, wrapping a tourniquet around the fury building in my chest, and take a deep breath. “Don’t worry about your guitar, okay? We’ll get you a new one. But I need to know if Dad hurt you in any other way. Where did he push you?”

The events come out in as many broken pieces as the guitar strewn across the floor. I reassemble them into a story that starts with Ty practicing his guitar with his earbuds in, and not hearing Dad yelling at him to stop making noise. It ended with our father bursting into Ty’s bedroom, shoving him into the wall and smashing his guitar across the floor, then stamping on it.

Once Ty has calmed down, I snap photos of the mangled guitar, for what it’s worth. Once I’ve confirmed neither Mom nor Dad are on the property, I let Pepper inside and tell Ty to pack a bag, because we’re leaving.

Ty throws a sports duffel on his bed and turns to me. “We have to take Pepper.”

Part of me wants to argue, but Ty’s right. Pepper’s no less prone to abuse than either of us. I throw clothes, toiletries and my most valuable belongings into a bag, including the graduation gift for Shri.

This whole situation reminds me too much of the past, of how powerless I was at Ty’s age. I grip the zipper tab and swipe it across the bag. History can’t be repeated.