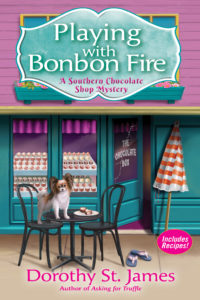 Chocoholic Charity Penn must smoke out the killer to stop her newly inherited beachside chocolate shop from going up in flames in Dorothy St. James’ decadent follow-up to Asking for Truffle.

Chocolate shop owner Charity Penn is finally settling into life in the quirky South Carolina seaside town of Camellia Beach cooking up chocolate treats. She’s even helped organize the town’s lively beach music festival which has brought rollicking crowds eager to dance the Carolina shag. That is, until one of the band’s lead singers is found dead beside a beach bonfire.

While also trying to balance the amorous attention of music star Bixby Lewis, in town for the festival, and her quest to perfect a new hot flavored bonbon, Charity dives into the investigation. Though it’s more spice than sugar when she discovers a threatening note, comes across decades of age-old secrets, and Bixby comes into the line of fire when a gas grill explodes on the deck of a beachfront house.

Now Charity must turn up the heat and catch the killer before her chance melts away in Playing With Bonbon Fire, the delightful second Southern Chocolate Shop mystery served up just right for fans of JoAnna Carl and Joanne Fluke.

What Terrifies Me (Don’t Laugh)

As a mystery writer, I try to tap into the reader’s fears. I want the reader to be sitting on the edge of her (or his) seat, flipping pages as fast as possible. To do this I study my own fears and how I can tap into those feelings for my books. The other day I was doing this and realized I’m afraid of some weird things.

Take, for instance, my paralyzing globophobia. That’s the fear of balloons. I don’t know that I’ve ever met anyone else who shivers at the sight of a colorful balloon bouncing toward them on the end of a string. (Just writing that sentence made me nervous.) Being near a balloon—except for the Mylar ones—makes my muscles tense up. My breathing turns shallow. And I have an irrational feeling that I need to get as far away from that “happy” explosive device NOW…if not sooner. I’ve even broken out in a sweat.

It all started when I was a toddler. Even though that was decades ago, I remember the day as if it were yesterday. It was sunny out and warm. We were all wearing shorts. I was attending a close family friend’s birthday party. The room was filled with toddlers and a few older siblings. The parents (who seemed like such nice people) of the birthday boy had devised a cute game. They’d filled their living room with colorful balloons. The balloons didn’t have helium in them, so the slightly egg-shaped orbs slowly bounced around on the furniture and on the floor. Thinking back on it, the image that comes to mind is a horde of menacing aliens advancing on us, the kind you’d find in an old Star Trek episode.

The object of the “innocent” game was to pop as many balloons as possible by sitting on them. As an impressionable toddler who didn’t yet know the ways of the world, I followed my peers and started sitting. And popping. And sitting. And popping. All of the other kids around me were sitting and popping balloons. I was stuck in the middle of a freaking balloon-killing battlefield. I tried to escape, but I couldn’t escape the sound of the explosions. By the time the balloons were all popped, my entire body was shaking. I don’t remember anything that came after that, not even eating the cake, which is a shame. The family was known for buying the sweetest, sugar-laden birthday cakes that could be bought at the local grocery store. 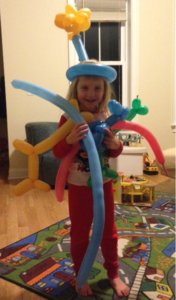 Fast forward mumble-mumble years. Life has been fine. I can mostly avoid balloons in my adult life…until I find myself the mother of my own toddler. My precious, gentle little girl loves balloons. She loves the sound of the latex rubbing against them. She loves it when they pop. She loves to bring me balloons. She wants to see me play with them. Seeing her run toward me with an innocent smile on her lips and her arms filled with balloons has got to be the sweetest, most terrifying experience of my life. I want to run away, but I can’t, because she’s my daughter. So I freeze up. I breathe too quickly. And find a chore that needs to be done immediately—like dusting the baseboards.

It’s funny what experiences latch onto us as children and refuse to let go. Thankfully, I’ve been able to turn my heart-pounding fear into inspiration for scaring my characters in my latest mystery novel, Playing with Bonbon Fire.

Do you have any odd fears? Come on, fess up. Don’t make me feel like I’m the only weirdo here. 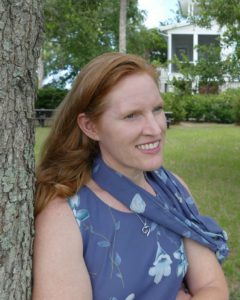 Mystery author Dorothy St. James was born in New York but raised in South Carolina. She makes her home on an artsy island community in South Carolina with her husband, a neurotic dog, and fluffy cat. Though writing has always been a passion for her, she pursued an undergraduate degree in Wildlife Biology and a graduate degree in Public Administration and Urban Planning. She put her educational experience to use, having worked in all branches and all levels of government including local, regional, state, and federal. She even spent time during college working for a non-profit environmental watchdog organization.

Switching from government service and community planning to fiction writing wasn’t as big of a change as some might think. Her government work was all about the stories of the people and the places where they live. As an urban planner, Dorothy loved telling the stories of the people she met. And from that, her desire to tell the tales that were so alive in her heart grew until she could not ignore it any longer. In 2001, she took a leap of faith and pursued her dream of writing fiction full-time.

Known for the White House Gardener Mystery series, Dorothy is going back to her roots and setting a mystery series in a Southern beach town much like the one she’s called home for the past 20 years. The Southern Chocolate Shop Mysteries combine her love of fine chocolates, quirky Southern charm, with a dash of danger.