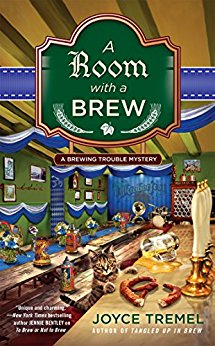 It’s Oktoberfest in Pittsburgh, and brewpub owner Maxine “Max” O’Hara is prepping for a busy month at the Allegheny Brew House. To create the perfect atmosphere for the boozy celebration, Max hires an oompah band. But when one of the members from the band turns up dead, it’s up to Max to solve the murder before the festivities are ruined.

Adding to the brewing trouble, Candy, Max’s friend, is acting suspicious… Secrets from her past are fermenting under the surface, and Max must uncover the truth to prove her friend’s innocence. To make matters worse, Jake’s snooty ex-fiancée shows up in town for an art gallery opening, and she’ll be nothing but a barrel of trouble for Max.

A Room with a Brew by Joyce Tremel is the third book in the Brewing Trouble Mystery series. This story is set in the fall in Pittsburgh and centers around Oktoberfest. I haven’t read the first two books in this series. However, I found myself quickly drawn into Max’s world and easily able to lose myself in the story. One of my favorite things about this story is the setting. I live in eastern Ohio, but the closest city to me is Pittsburgh, Pennsylvania. I enjoyed all the “Pittsburghese” in the book: words you only hear in Pittsburgh and the surrounding areas. Yinz is a part of our vocabulary here as well. 🙂

Max’s intelligence, sincerity, and loyalty to her friends made her an enjoyable character. This is the perfect mystery to cozy up with, especially in the fall. The unique occupation of our amateur sleuth makes this an unforgettable mystery. I’m looking forward to reading the other books in this series. 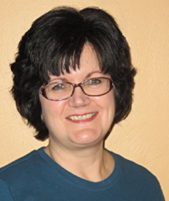 Joyce Tremel was a police secretary for ten years and more than once envisioned the demise of certain co-workers, but settled on writing as a way to keep herself out of jail. She is a native Pittsburgher and lives in a suburb of the city with her husband.

Booked for Death by Victoria Gilbert