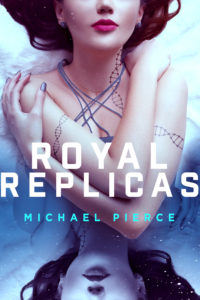 “Princess Amelia is dead… and one of you will replace her.”

Seventeen-year-old Victoria Sandalwood has served the Duke and Duchess all her life. Over the years, she’s learned to make due with what she has and endure her surrogate father’s awful punishments. She dreams of escape, but never expected it to come in the form of a message from the Queen of Westeria.

Victoria learns that she’s the Queen’s daughter, the younger sister to Princess Amelia, and it’s time to come home and claim her birthright. When she arrives, she discovers she’s not the only one who received the royal message.

Victoria must compete with six other girls to earn the affection of both the Queen and a princely suitor… and to replace the secretly deceased Princess Amelia. If she fails to win the crown, Victoria may just have to fight for her life…

Royal Replicas is the first book in a YA dystopian series. If you enjoy courtly intrigue, heart-pounding adventure, and sweet romance, then you’ll love this captivating story. Perfect for fans of Kiera Cass, Bella Forrest, and Veronica Roth.

Excerpt
“Hey there,” the man said as his thoroughbred stopped before me.

I reached over the fence and stroked the magnificent creature’s muzzle. “Hey there, yourself.”

The rider removed his sunglasses and riding helmet. “You must be Victoria.”

“Good guess,” I said, suddenly recognizing the rider from the hologram message received at the Ramsey estate. “And I presume you’re Prince Byron?”

He didn’t quite look like the clean-cut Prince Byron from the hologram, but it was definitely him. His dark hair fell in all directions creating the perfect mess. Thick stubble covered his face, his eyebrows bold, and his gray eyes smoldering, making him look at home with the brawny riders of the Outlands, not royalty.

“Guilty,” he said. His gaze on me was intense. “I’m not supposed to be here yet. I arrived early and thought I’d get in a little riding before cleaning up. It clears my head.”

I knew I wouldn’t survive if I went out there. “It wouldn’t be proper. I’m dressed for our official introduction later this afternoon.” I held up my shoes dangling from one hand to reinforce my point.

“I can see that. And a very lovely shade of yellow, I might add.”

“Canary,” I said with a smirk, gaining a bit of confidence.

The intensity of his eyes on me only seemed to strengthen. I found myself leaning into the fence like my body was being pulled forward. His boot in the stirrup was only inches away.

“Okay… I do appreciate learning new things. Since I can’t convince you to ride with me, what else interests you, Miss Sandalwood?” Prince Byron asked.

“Do you know what ward I’m from too?”

“Did you memorize the basic information on all of us?” I asked.

“I’ve done my homework,” he said with a smile that deepened the dimples in his cheeks, giving him a boyish charm beneath the hard stubble. “We’ll soon see if it was enough.”

“Well isn’t this a pleasant surprise,” said a voice from behind me.

The expression on the Prince’s face had made no indication anyone was approaching until that moment; his gaze left me for the first time since the start of our conversation. I turned and saw Constance ten yards away, approaching fast.

“It seems we have a frontrunner already stealing the Prince away for a little one-on-one time before he’s even scheduled to arrive,” she said, stopping beside me and linking an elbow with mine. “Isn’t my sister super cute in yellow? She’s like a perfect little doll I could set on a shelf and stare upon for hours.”

“I beg your pardon?” Constance lay her head on my shoulder, staring longingly up at her possible prize.

“The shade of yellow is canary,” he clarified.

“And I see you’re more than an Adonis—knowledgeable, worldly and wise.”

“Not as much as your sister here.”

Constance lifted her head and gave me a sidelong glance, seemingly deciding how to take the comment. She turned her attention back to him. “I also love to ride. Would you like company out there?”

“I wouldn’t want to mess up your dress or your hair or anything else when you’re so perfectly put together,” the Prince said.

“Don’t be silly. I have plenty more dresses in my closet and an assistant to fix any errant strand of hair before our official meet-and-greet. I want to take advantage of all the time we have together. It will go by in the blink of an eye. Would you like a riding partner?”

She offered him her hand and he shook it.

“I’ll meet you at the stables and help you get set up.”

“I’m so excited!” she squealed.

I forcefully took my arm back from the snake beside me.

“It was a pleasure meeting you, Miss Victoria Sandalwood. I’ll see you inside later,” Prince Byron said, strapping on his helmet, sliding on his sunglasses, and riding off toward the stables.

“Yes, you will,” I said, more to myself than him. I should have pushed through the pain and joined him in the field when I had the chance since it literally hurt to watch him ride away.

Constance grabbed my upper arm and gripped it tightly. “Nice try, sweetie. You won’t get him. Why don’t you go back to the house and wait with the rest of the runners-up? The Prince is mine.” 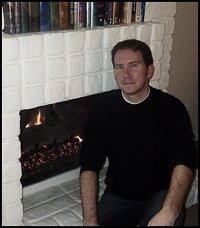 Michael Pierce is the author of the young adult contemporary fantasy Lorne Family Vault series. He writes fast-paced, character-driven books filled with adventure, mystery, thrills, and a pinch humor and romance to spice things up. The thread that ties all of his books together is the possibility of belief: what you believe becomes your reality.

Michael currently lives in Southern California with his wife, daughter, and two blood-thirsty chiweenies. When he’s not at the computer, he enjoys spending quality time with family, practicing yoga, playing guitar behind closed doors, and listening to as many audiobooks as possible.

To get an email whenever Michael releases a new title, sign up for his VIP newsletter at www.michaelpierceauthor.com.