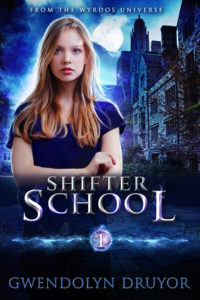 She’s gonna get them all killed.

So they locked her away.

All that is about to change.

In a world hidden from wyrdos and humans alike, shifters are still recovering from a vicious plot to destroy them all. They have two laws they live by now:

2) Protect the children at all costs.

Laylea has just broken rule number one. But she’s only fourteen. So they’re sending her to school. Where she’s going to learn . . .

Anyplace can be a prison.

The Lincoln Park Shifter School is not your grandma’s uber-secret, underground academy.

She ran from the dorm before they started laughing again. Laylea left her pod open. She didn’t care. Everything she owned was either on her neck or in school storage. She’d never had friends before, she didn’t need them now. She shoved through the little crowd at the curtains and didn’t look into any of the faces gathered outside the girls’ door. She couldn’t have seen them through her tears anyway.

She wanted to shift and run. A good long run through the city would feel good. Her mind would have to focus on cars, pedestrians, uneven sidewalks, shop doors, guard dogs, and dangerous litter. She’d have no room in her head for all her worries. She wouldn’t be able to think about how KC and Oscar hated her for nearly getting them killed, how if she’d run when Oscar wanted to, he wouldn’t have been here to get hurt. Her mind would be focused on her own survival rather than concerns for Oscar’s mom, the kids in ST, and her family’s safety now that she’d spilled all their secrets in front of Jase Batka.

But she couldn’t shift because she was defective. It took her eleven years to figure out she even could shift and now she was going to die without ever figuring out how. Or why.

A Day in the Life of the Author

My day typically starts with a tongue bath from my Irish Jack Russel, Lyman. He’ll hop over from his bed, (We call it his superfluff. One laundry day I piled a clean comforter on the comfy chair in our bedroom instead of folding it right away. He claimed it. It’s tall enough that he can see us on the bed but is in no danger of being crushed. I tend to do barrel rolls in my sleep.) climb up my body and lick the hell out of my face before curling up to sleep some more. He’s always disappointed when I get up.

I’ll go for a run and then come back and start downloading marketing and sales reports while I make oatmeal and a French press of Earl Grey. I’ll get a couple of hours writing in before my man, Jeff, brings Lyman down for morning walk.

After morning walk and some kitchen time with the boys, I’ll get back to writing. After Jeff leaves for the Train Shack, Lyman will crawl into my lap or beg to be lifted into my lap, depending on if I’m at my desk or on the couch. Around noon I get lunch. (Typically something slapdash and not as healthy as I would like.) I take care of marketing and advertising and blurbs and covers and sales tracking and social media during lunch. Then it’s up to my Sound Cave at 1:00!

I am an audiobook narrator as well as an author. So, my afternoons are dedicated to recording and editing audiobooks, [http://bit.ly/Gaudiobooks] Lyman sleeps at my feet in the Sound Cave which is great until he starts dreaming, loudly.

In the evenings, after another good walk with Lyman, I’ll work on graphics and numbers and things that I can do while watching a movie with my boys, unless we’ve got a hot game of Settlers of Catan on. If it’s just us for an evening and he demands I take a break, Jeff and I may play two characters each in Pandemic or our newest addiction: Kingdom Builder.

Then it’s one more lovely walk around the neighborhood, usually a long one because Lyman doesn’t want to go to bed. I LOVE bedtime because that’s when I get to read. I’ve been working my way through Wendy Wang’s Witches of Palmetto Point series and I am in LOVE with Charlie! Then sleep, Lyman curled up in my belly. He waits until I’m asleep to jump over to his superfluff.

About once a week, I pick up a shift as a Tour Guide at the World Famous Universal Studios! On those days, I’ll get up and do my office work right away over breakfast. Then I hop on my bike (my primary mode of transportation) and ride to the studio. I’ll find a backlot set that isn’t being used and curl up inside with my notebook to write longhand for an hour or so. Then it’s up the hill to do four tours and talk about movies and TV shows and maybe spot Kristen Bell or Rashida Jones or a giraffe. Yes, a giraffe trainer had his charge greeting every tram that went by one day. Another time, my tram had to wait for 20 minutes while a pair of elephants crossed the road in front of us to board the Evan Almighty ark inside soundstage 44. Then there was the time that Eddie Murphy stopped my tram and nobody recognized him because he was dressed up as the lady from Norbert.

After touring, if there’s still light, I’ll hide out again in a set and write some more. Then home to be attacked with kisses and crying from Lyman and audio work.

That’s what my days are like except when they’re not, which is most of the time. I’ve got auditions and voice over jobs and friends to take care of as well.

Can you see why my MC is a twelve-pound terrier? 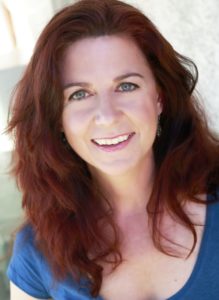 Gwendolyn Druyor was born at the Quonset Point Naval Air Station Hospital, North Kingston, RI. The ID bracelet wrapped three times around her little wrist. She could swim before she could walk and read before she started school.

She has traveled the world telling stories. After a year in Amsterdam writing and performing sketch comedy at Boom Chicago, she toured North America with Shenandoah Shakespeare and with the incredible educational show Sex Signals. From Paris, FR to William’s Bay, WI, you’ll find her gypsy life reflected in her books. If you met her on the road, read her closely, you may find yourself in there.

For now, Gwendolyn lives in Hollywood with her Irish Jack Russell, Josh Lyman Zyrga, who is still pouting over the fact that she didn’t put him on the cover of WereHuman.

For more information on Gwendolyn and her projects sign up for her newsletter at www.GwendolynDruyor.com.

Gwendolyn Druyor will be awarding $50 Amazon/BN gift card to a randomly drawn winner via Rafflecopter during the tour. For your chance to win, please comment on this post and enter on the Rafflecopter below. Be sure to click the banner at the top of this post to visit other stops on the tour. Good luck!