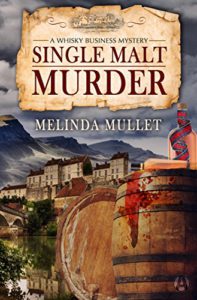 Abigail Logan never expected to inherit a whisky distillery in the Scottish Highlands. But in the first novel of an engaging new series blending fine spirits with chilling mystery, Abi finds that there are secrets lurking in the misty glens that some will go to any lengths to protect . . . even murder.

When Abi inherits her uncle’s quaint and storied single malt distillery, she finds herself immersed in a competitive high-stakes business that elicits deep passions and prejudices. An award-winning photojournalist, Abi has no trouble capturing the perfect shot—but making the perfect shot is another matter. When she starts to receive disturbing, anonymous threats, it’s clear that someone wants her out of the picture. But Abi’s never been one to back down from a fight.

Arriving on the scene with her whisky-loving best friend, Patrick, and an oversized wheaten terrier named Liam, Abi seems to put everyone in the bucolic village on edge—especially her dour but disturbingly attractive head distiller. Acts of sabotage and increasingly personal threats against Abi make it clear that she is not welcome. When one of Abi’s new employees is found floating facedown in a vat of whisky, Abi is determined to use her skills as an investigative journalist to identify the cold-blooded killer and dispense a dram of justice before he strikes again. But distilling truth from lies is tricky, especially when everyone seems to have something to hide.

Using the Art of Film to Refine Your Writing

Pacing is everything in fiction these days. The swifter the better. Contemporary audiences expect it and publishers demand it. As writers we like to wallow in our pretty prose painting masterpieces of exquisite detail that blossom into 100,000 word genre works that have to be cut by a third to sell.

To fight the tendency to overwrite I sometimes try to imagine how my scenes would play out on the big screen. Films done right, are notoriously lean, mean story telling machines. If I visualize my scene and find it is dragging or rambling I start cutting and splicing like a celluloid film editor. The idea that mass-market fiction and film are converging as mediums was brought home to me by a book I picked up in the university bookstore the other day called 101 Things I Learned in Film School by Neil Landau.

As I flipped through Landau’s words of wisdom for aspiring film makers I was struck by how much of the advice was directly applicable to today’s fiction writers. Take a look:

Start strong/start late – Jump right into the action. Don’t take weeks to tell a story that can be told in days.
One of the biggest mistake first time writers make is trying to be too chronological. If you start a book with a long exposition of the protagonist’s backstory before jumping into any kind of action you are going to lose the reader. And putting down a book is easier than walking out of a film you just paid $20 to see.

Show don’t tell. Writers hear this all the time. It’s so much easier to embrace in a visual medium, but it’s vital to the written word as well. Think about a scene in a movie where a character’s mental state is conveyed through their restless movement or their nervous ticks. Incorporating these kind of visual clues into your dialogue gives you a subtler form of character development and keeps your reader visualizing the action rather than simply being told what’s happening.

No passive protagonists. Landau stresses the importance of having your character stand for something, not just against something. It informs the moment when your character makes that all important choice to act – a choice she must make for herself. Somewhere in the middle situation should become deeper/darker forcing protagonist to reevaluate. In a memorable conflict a protagonist not only acts but evolves.

Establish Problem/Complicate Problem/Resolve Problem. Movies are defined by three clear acts: a beginning, a middle and an end. It’s important to start with a significant event that disrupts the protagonist’s life and establishes clear compelling stakes that require action. The situation should always get worse in the middle before it gets resolved. If you find your story lacks tension it’s usually because the stakes were poorly defined, not high enough or the antagonist wasn’t sufficiently threatening in Act One.

If the first time you see a character, she falls out of a tree, or gets arrested or makes a fool of herself, she creates a lasting impression in the mind of the reader. In books with a number of characters or suspects it is vital to find a tag for each character that makes them memorable for the reader. In a film it can be a visual cue, in books you have more leeway. If a character is first seen walking through the village with a sheep on a leash she becomes sheep girl. A tag that will clearly bring the character to the minds of the reader as you move through the story.

Act 2 is where a poorly structured film goes to die. Go to a film where the scriptwriter has lost direction in the middle it’s excrutiating. It’s equally true in books, more so if the stakes in Act 1 are not clearly defined. Each scene should be moving the characters inexorably toward the denouement not bogging down in random ephemera.

With that in mind every scene should give new information and contribute to the building of conflict. The information doesn’t have to be huge but it should be something significant even if it’s only how different characters perceive or react to the same info. When you review middle section ask yourself in each scene, each encounter, how is this moving the plot forward. If it isn’t, it’s ripe for cutting.

Setting as a character. Details are key. In the Whisky Business series the distillery, Abbey of Glen, is very much a character in the stories. She is an embodiment of the history and roots of the area, a link to the days of smugglers and bootleggers, a source of economic support and employment down the years as well as a source of community pride in the handcrafted product of the grains and waters of the land.

Dialogue is not real speech. Colorful, compact on point, it propels the plot forward or tells you something about the character.
As Neil Landau says, give your characters the anonymity test. If you can cover up the characters names and can’t tell who’s talking they are too similar. Voices should be distinct and idiosyncratic. 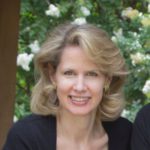 Melinda Mullet was born in Dallas and attended school in Texas, Washington D.C., England, and Austria. She spent many years as a practicing attorney before pursuing a career as a writer. Author of the Whisky Business Mystery series, Mullet is a passionate supporter of childhood literacy. She works with numerous domestic and international charities striving to promote functional literacy for all children. She lives in Washington, D.C., with her family.

Enter below for your chance to win an eBook copy of Single Malt Murder by Melinda Mullet. There will be three winners. Good luck!
a Rafflecopter giveaway