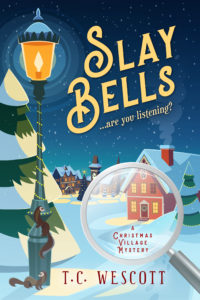 ‘Twas the week before Christmas and all through the village, the night settled in over swirling-smoke chimneys.

The air was alive with pine and with holly, with sugar and cinnamon and cider, by golly!

Along snowy lanes and through shadows it crept, past windows behind which each villager slept,

Tonight, in Christmas Village, a killer is stirring.

Welcome to Christmas Village, a magical hamlet where even in December the roses hold their luster and bees buzz among the bluebells. You’re just in time for the week-long Christmas Festival, and nowhere is Christmas celebrated with such unrestrained merriment as the village which bears its name. Mayor Cobblestone and Sheriff Fell will be somewhere nearby, doing all they can to make sure you’re safe during your stay.

Provided you haven’t booked a room at Plum Cottage.

Nestled betwixt an opulent garden with meandering footpaths and an ancient grove of plum trees, Rose Willoughby’s boarding house is plum-full with lodgers. There are no vacancies, but just wait. Soon there will be one…and another…and another.

Presently lodging at the cottage are: the juggler, the acrobat, the magician, the psychic, the strongman, the manager, and the pretty assistant. In town as festival entertainment they’ve each brought their own bag of tricks. And a closetful of skeletons.

When the entertainers begin dying in inexplicable ways, some villagers believe a beast from old village lore is the culprit. The sheriff knows better, but he’s just as helpless to catch the invisible killer as are the town folk with their eyes to the sky in search of a flying creature. But our mysterious murderer hasn’t counted on yet another lodger coming to the cottage: Maribel Claus.

Short as a stump, round as a wheel, sweet as a candy cane, and a sharp as a whip, Maribel loves a good puzzle. But has she finally met her match at Plum Cottage?

Can you figure out whodunit before Maribel does? If you’re up to the challenge, here’s your first clue—the key to unlocking the secret of the murderer’s identity lies in figuring out how the murders were committed. Good luck!

Are Cozies and Traditional Mysteries really the same? By T.C. Wescott

I’ve read in books and on the internet for years the argument that the modern cozy mystery is the direct continuation of the traditional detective story popularized in the Golden Age of detective fiction (generically defined as the era between the two World Wars). In our modern era, the most popular golden age novelists are women, in particular Agatha Christie, Margery Allingham, and Dorothy L. Sayers. However, the Golden Age is made up of considerably more talent than this, and when a reader embarks on a journey to enjoy this classic literature, he or she quickly learns that much of the best output falls far outside the guidelines of the modern cozy.

Agatha Christie, for instance, imbued much of her work with politics, violence, and the darker side of human nature. She had little reason not to as the rules of the game did not prohibit this. The rules primarily argued for one thing – fair play between author and reader. Traditional mysteries are still being written today that are not cozies as they might contain sex, depict violence, swear words, and other factors that would not be found in a Berkeley Prime Crime publication or the ilk. It might be fairer to say that the traditional mystery of today is the heir apparent of Hercule Poirot and Golden Age detectives of his mold, whereas the cozy mystery is the descendant of Miss Jane Marple of St. Mary Mead, the quintessential English village.

While there are obvious exceptions, the modern cozy writer (or publisher) places more emphasis on the cozy environ in which their murders take place than the components of the mystery itself. That is to say the ingenuity of the murder or the solution have taken a backseat to the town, or shop, or magical library, what have you, in which the story takes place. And as cozies are almost exclusively written as series now and not stand-alone books, there’s a soap opera element wherein the reader becomes caught up in the professional, personal, and romantic lives of the continuing characters and this often accounts more for the popularity of the series than the mysteries themselves, which are secondary to the dramatic elements. This was not so 80 years ago when the masters were working. As members of the Detection Club of London, they were in a constant state of friendly rivalry, a game of one-upmanship, if you will, concocting murder devices, deep and entwining chains of suspects, and cleverly placed red herrings as a way of confounding their fellow scribes.

As a fan of both the classic mysteries and the modern cozy, I thought it would fun to meld the two worlds by writing stories in the classic mystery fashion but with all the wonderful trappings of the modern cozy. With Running from Scissors (the first in the Running Store Mystery series), I picked a hobby currently very popular—running—and chose my setting as a running store in a small cozy town, with a 40-something divorcee at the center who befriends a quirky, snarky independent bookseller and an elderly lady who turns out to be a once-popular writer of traditional mysteries. For Slay Bells and the Christmas Village Mystery series, I created the coziest world imaginable, drawn from the sense of wonder I feel when I see the intricate village models or the paintings of artists such as Thomas Kinkade. I thought it would be fun to bring such a world ‘to life’ and have at its center none other than Mrs. Claus herself as the sleuth. In the first books of both series—Running from Scissors and Slay Bells, respectively—I’ve chosen to make the murder puzzle the center of the action by creating a Howdunnit for my sleuths to solve. To me, the impossible or ‘locked room’ murder is the most fun to read and also the hardest to construct and write. I hope my readers enjoy them as much as I do.

The cozy mystery genre continues to evolve. The most obvious change in recent years is the very popular introduction of witches and the supernatural element. Prior to that, developments were the ubiquitous inclusion of a cuddly animal and, in many cases, recipes. I’m not a terribly gifted cook and will not be inflicting my recipes upon readers, but I am an avid animal lover with two dogs, two cats, and a ferret at home. In Running from Scissors you’ll meet Meatball, the lovable Russian Blue kitty, and in Slay Bells Maribel receives vital help from her two ferrets, Dancer and Prancer. Ferrets are woefully underrepresented in cozies, so it was a lot of fun for me to write ferret characters based upon the three ferrets I’ve loved over the years.

I’d like to hear what other readers think on the matter of how the modern cozy differs from the classic traditional mysteries, what they prefer, and what changes, if any, they’d like to see in cozy mysteries as the genre continues to evolve. 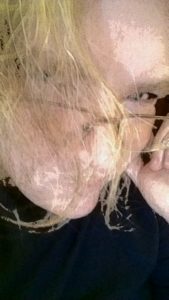 The Christmas Village Mystery series will launch in November of the same year with the debut title Slay Bells. The formula for his books is simple – mixing the classic, traditional detective fiction standards with all the trappings of the modern cozy mystery.

3 Responses to “Slay Bells by T.C. Wescott – Are Cozies and Traditional Mysteries really the same? + Giveaway”