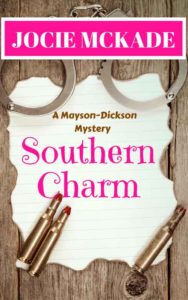 In their latest adventure, in SOUTHERN CHARM, Emme and Jackie are enjoying, well Emme is enjoying a stroll along the Virginia Beach boardwalk when they attend the Neptune Festival and a sand art exhibit. Jackie tags along reluctantly, then a series of events, sends Emme sprawling into a sand sculpture. But it’s no ordinary sand sculpture; it’s hiding a dead body with lots of secrets.

Complicating their lives are cryptic GPS coordinates that lead them to their parent’s mysterious safe house, where they encounter protective drones. I’ll let you find out what happens next.

Mayson & Dickson, when they crossed the line, it was murder.

Thank you for hosting me today. My name is Jackie Dickson, and I’m the featured character in Jocie McKade’s Mayson-Dickson Investigations cozy mystery series.

That sounds intriguing, why Mayson-Dickson?
That was not my idea, in fact, I hate the name. It was apparently picked by my father, a man I never knew existed.

Wait, your dad picked your name, but you didn’t know him?
That’s correct. I received a letter summoning me to a law office in Washington, D.C. Little did I know that day would change my entire life. I was introduced to a woman that was supposed to be my sister, my twin sister, can you imagine?

You have a twin sister you didn’t know existed?
Apparently. But I have my doubts that we are sisters. I mean the woman is an annoying redneck from Alabama. She swaddles herself in pink and wears, oh man, she wears a NASCAR hat. I think she’s fixed grits a few times too; I can smell the things.

What brought you together?
A bullet. Yeah, blunt I know, but I’m from Boston it’s how we are. The day we met in that lawyer’s office, a sniper took out the only man who knew our parent’s past. He did manage to utter some strange message that we are working on deciphering.

We were given new identities and told to head to a new location. The next thing we know, there’s a dead body washing across Emme, and we are tangled up in a murder investigation.

Why were you given new identities?
Kind of, it had something to do with our parents. Apparently, they were both involved in some covert government black ops work. They split up, and they split Emme and I up to protect us. At least, that’s what little bit we were told before that sniper bullet took out our only source of information. In spite of not really liking each other, we are working together to find out the truth about our parents.

So, in the middle of all this, you two start at PI firm?
Why not? We found that we are really good at solving murders and using our PI credentials is a great way to investigate our parents without drawing too much attention.

Tell us about those delicious men in your new life.
First, there is Fender; he came with the new house. He is a beach bum that lives in the cottage next door and is the property caretaker, but I suspect he is more than that. The man is nothing I would ever have even given a second glance too in Boston. Here, however, I don’t know maybe it’s the beach air, but I have a hard time keeping my distance.

Then there is Agent Meechum working locally on assignment for the FBI. He is a true pain in Emme’s neck. The man dogs her like a puppy. I think we drive him crazy.

And then we have Zack, we sort of inherited him and he is proving to be very valuable.

Plus there is, what? What? Jocie is giving me that annoying throaty thing; you know when you need to shut up. I don’t know why she can’t just say ‘shut up.’ I think that crazy Southern sister of mine is getting to her.

If you’d like to know more, just head over to Amazon and snag a copy of Mayson-Dickson, Southern Charm.

Jocie is giving away an ebook of Southern Charm! Enter below! 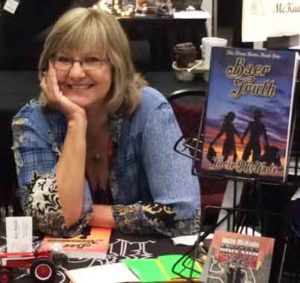 Jocie McCade has worked at several jobs before landing her perfect one as a librarian. With a soft spot for U.S. Veterans, she chaired the Veteran’s Oral History Project and her work with the program lead to her speaking before the Project committee and the U.S. Library of Congress. She has won several awards for her non-fiction writing on a multitude of subjects.

Her fiction writing has received the Author / Ambassador at Library Journal Self-e Authors, Winner Queen of the West Reader Favorite Award, Amazon Bestseller – Historical, Double finalist in the Next Generation Indie Book Awards in the Mystery and Humorous Categories, and her novel Baer Truth received 4.5 stars from RT Book Reviews.

Writing mostly romantic comedy and humorous cozy fiction, Jocie can humor in most everything. She lives in the Midwest on Dust Bunny Farm with her family and Diesel the Wonder Dog. When not writing, she grows ArnoldSwartzaWeeds in her garden and camps whenever the opportunity presents itself.

For your chance to win an ebook copy of Southern Charm by Jocie McKade, please enter using the giveaway widget below. This giveaway will end on May 14, 2018 at 11:59 PM EST. The winner will be randomly selected from all eligible entries and contacted via email. The winner will have 48 hours to respond or a new winner will be selected. Thank you for entering and good luck!