by Caroline Fardig
Also by this author: Southern Discomfort 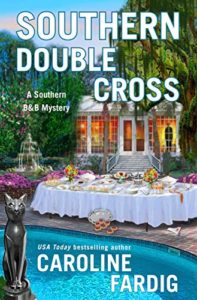 Quinn Bellandini is ready to get back to running her grandfather’s B&B in Savannah, Georgia, with her sister, Delilah—but first, she has to coordinate a fundraising event at the house of local philanthropists, with the help of her boyfriend, Tucker Heyward. Everything is running smoothly until Quinn’s friend, Pepper Fox, frantically calls her with the horrifying news that the lady of the house was found dead. Pepper’s brother, who was working as a caterer, is soon charged with her murder.

Pepper knows her brother didn’t commit the crime and asks Quinn, now a veteran detective with two solved murders under her belt, to prove his innocence. Quinn can’t bear to see her friend upset and enlists Delilah and Tucker to help investigate.

The invite list quickly turns into the suspect list as tensions mount and old feuds are brought to light. Could Quinn have hired the only catering company in Georgia that throws in a murder on the side?

I loved the first book in this series, Southern Discomfort, and it was such a long wait until book 2, Southern Harm, was released. I was super excited to see that book 3 was coming out so soon after I spent time with the Bellandini sisters. Southern Double Cross has Quinn and Delilah working to clear their friend Pepper’s brother Parker after a wealthy woman is murdered at a fundraiser. There are so many things I love about this series. The characters are just wonderful. I am a huge fan of Quinn – she is smart and loyal. Delilah is the perfect balance for Quinn. The B&B that they help their Papa Sal run is like a character in itself.

Southern Double Cross had so many red herrings, I didn’t know which way to look. With clues all over the place and several viable suspects, I wasn’t sure how Quinn and Delilah (and Tucker) were ever going to figure this one out. The mystery was absolutely delightful. So well-written and just a joy to read. Each book in the series is better than the last, though I don’t know how that’s possible. 🙂 I am crossing my fingers and toes that there will be more in this series! I’m not ready to let the Bellandini sisters go. This series is on my auto-buy list.