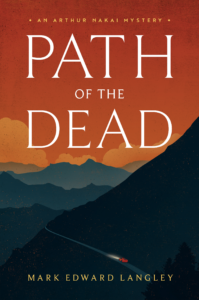 The battle is one of wits and cunning, where the strong heart will overcome his enemy.

Ex-marine Arthur Nakai spent years as a member of the Shadow Wolves, an ICE tactical unit tasked by the US government to hunt human traffickers and drug smugglers on the US/Mexico border. He put that life of confronting violence in the darker contours of the desert landscape behind him and settled into a quiet existence in New Mexico with his wife, Sharon, a local TV reporter.

But when Sharon goes missing after crossing paths with a serial killer who has just added to his list of young victims, Arthur’s calm world is shattered. He must return to the darkness of the life he left behind in order to save what matters most to him, and the future he and his wife plan to share together. He can only hope that she is still alive, and that his skills will be enough to find her.

So begins the hunt—to find a ruthless killer and save the love of his life.

Praise for Path of the Dead:

Craig Johnson, New York Times best-selling Author of the Longmire Series:
“Combining the gait of a fine horse, the comfort of your favorite Indian blanket, and the ease of a well-worn saddle, Mark Edward Langley’s Path of the Dead is one heck of a debut novel!”

Midwest Book Review, September 2018:
All the more impressive when considering that “Path of the Dead” is the debut of Mark Edward Langley as a novelist, this inherently riveting read showcases his genuine flair for character and narrative-driven storytelling. While especially and unreservedly recommended for community library Mystery/Suspense collections, it should be noted for the personal reading lists of dedicated mystery buffs.

Margaret Coel, New York Times Best-selling Author of Winter’s Child:
“A dark and gripping novel, filled with suspense and heart-stopping twists . . . Path of the Dead is a smash debut. Don’t miss it!” 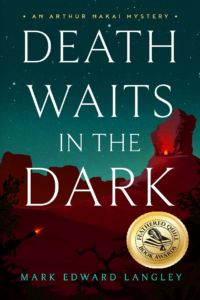 It took all of thirty seconds for two shots to bring the world of Margaret Tabaaha crashing down around her. After losing her husband in Afghanistan during the first year of Operation Enduring Freedom, her two sons were all she had left. Now they had been taken from her violently, deliberately, plunging her into a whiskey bottle and stripping away her reason for living.

When Arthur Nakai receives a call from his first love, Margaret, her voice pleading for his help, it comes as he is attending a wake for one of the men he considered a brother from his days in the Marines 6th LAR Wolf Pack Battalion. Feeling a deep and responsible obligation to help her, Arthur soon finds himself involved in the multi-billion-dollar world of the oil and gas industry and coming face-to-face with an old adversary, Elias Dayton. Their paths had crossed when Arthur was a member of the Shadow Wolves, an elite tactical unit within US Customs and Border Protection. Now Dayton runs Patriot Security, a Blackwater-type firm that keeps the oil rigs, gas wells, and man camps secure from the Water Protectors, protesters pushing to stop the fracking and poisoning of Native lands.

As Arthur works through the case from his end, Navajo police chief Jake Bilagody tackles it from another angle, looking into the strained relationship between the oil company and the Navajo people, all while searching for a missing Navajo man that may have become an unwilling piece on the reservation checkerboard. But when Arthur learns the identity of the boys’ killer, he struggles to make sense of it. Because if the clues are right, he will be forced to make a decision that will haunt him for the rest of his life.

Praise for Death Waits in the Dark:

William Kent Krueger, New York Times Best-selling author of This Tender Land and Ordinary Grace:
With Death Waits in the Dark, Mark Edward Langley offers readers an utterly compelling portrait of human beings struggling to deal with the aftermath of great trauma. Langley writes about the great Southwest with a loving eye for detail that fans of Tony and Anne Hillerman will readily embrace. I was utterly captured by this fine second novel in the Arthur Nakai series. Along with those who are already fans, I can only hope that there will be many more stories to come. I recommend this book with a full heart.

Anne Hillerman, New York Times best-selling author of the Leaphorn, Chee & Manuelito Novels:
Death Waits in the Dark tells a gritty story of betrayal, deceit, and danger through the eyes of Navajo protagonist Arthur Nakai. The tightly written noir plot moves from scene to scene like a thriller, building suspense in every page.

Michael A. Black, author of Legends of the West, Dying Art and Cold Fury in the Executioner series:
In Death Waits in the Dark, Mark Edward Langley’s style is reminiscent of the great John D. MacDonald. Don’t miss this excellent second novel in this entertaining series

Publisher’s Weekly, July 2020:
The action builds to a bittersweet ending. Descriptions of the starkly beautiful New Mexico landscape contrast with the poignant picture of the state’s poor and alcohol-stricken native peoples. Tony Hillerman fans may want to check this one out.

Midwest Book Review, August 2020:
The second title in author Mark Edward Langley’s ‘Arthur Nakai Mystery’ series, “Death Waits in the Dark” is a carefully crafted police procedural style mystery that provides the reader with an entertainingly original and inherently riveting read from cover to cover. While very highly and unreservedly recommended for community library Contemporary Mystery/Suspense collections, it should be noted for the personal reading lists of all dedicated mystery buffs.

Seattle Book Review, August 2020:
Mark Edward Langley has written a compelling second book in his Arthur Nakai detective series. The characters are well-rounded and intriguing, and there are plenty of red herrings to keep the mystery under wraps until the very end. Rated 4-Stars. 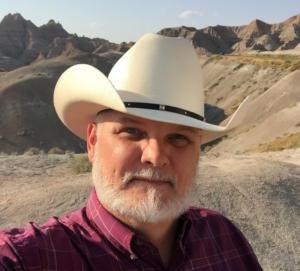 Mark Edward Langley was born in Richmond, VA on July 24th, 1960. When he was 9, he moved to a south suburb of Chicago, where he lived until his father was transferred to Houston, TX. Langley took a job with B. Dalton Booksellers and begun his love for reading books. Langley has always felt a kinship with the American Southwest. When he was 12, his parents took him on vacation out west, and his heart and soul were touched by the beauty of the landscape and the wonder of its people. When he was older I began reading Robert B. Parker, Mickey Spillane, John D. McDonald, Ernest Hemingway, Tony Hillerman and, more recently, Craig Johnson of Longmire fame. It was when he took a two week trip into the West of my youth in his thirties, that he realized he had found his true home. Researching his debut novel, Path of the Dead, he drove from Albuquerque, New Mexico to Glacier National Park, Montana, traveling through the beautiful and iconic scenery that was to become the book’s majestic backdrop. Upon revisiting New Mexico, doing research for his second novel, Death Waits in the Dark, he had the wonderful opportunity to meet with some of the Navajo people and have an open and respectful conversation. Langley is an award-winning author if the Arthur Nakai mystery series; Death Waits in the dark winning both as a finalist in the American Book Fest Awards and winning the coveted Feathered Quill Award for best mystery of 2021. His third novel in the series, When Silence Screams, will be released August of 2021. He is currently writing his fourth novel of the series, Broken Glass, due out August 2022.