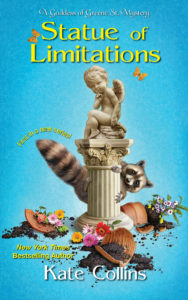 In this delightful new series by the New York Times bestselling author of the Flower Shop Mysteries, Athena Spencer comes back home to work with her crazy big Greek family at their garden center. But she never expected a return to her roots would mean protecting her family from murder . . .

After her divorce, Athena has returned to coastal Michigan to work in her family’s garden center and raise her son, while also caring for a mischievous wild raccoon and fending off her family’s annoying talent for nagging. Working alone at the garden center one night, Athena is startled by a handsome stranger who claims to be the rightful owner of a valuable statue her grandfather purchased at a recent estate sale.

But she has even bigger problems on her plate. The powerful Talbot family from whom her pappoús bought the statue is threatening to raze the shops on Greene Street’s “Little Greece” to make way for a condo. The recent death of the family’s patriarch already seemed suspicious, but now it’s clear that a murderer is in their midst. Athena will have to live up to her warrior goddess namesake to protect her family from a killer and save their community from ruin . . .

What if this outrageously expensive statue was a fake, not even worth what we’d paid to move it from the Talbots’ estate to the diner and then to Spencer’s? I felt sick to my stomach thinking about it.

I’d protested mightily that it was too big for the diner and too far out of my grandparents’ budget anyway, but as always, my voice went unheard. The family had gathered behind my stubborn pappoús because he was the head of the family and his decisions were final, regardless

of what his college-educated granddaughter had to say.

The problem was twofold: it was too large for The Parthenon’s front entryway, and Spencer’s was stuck with it until we could convince Pappoús we needed to sell it, which didn’t seem likely. He loved his Treasure of Athena and would often bring his lunch down and sit at

one of the outdoor tables gazing at her as though waiting for her to come to life.

As Case worked, I had to admit that the statue was beautiful. I hadn’t seen such exquisite detail in a sculpture since I’d toured Greek museums with my family years ago.

Standing at over six feet tall, Athena wore a traditional flowing toga gathered over one shoulder with a clasp so that the material draped down over her small, firm breasts. Another layer of material swirled down from her waist to the sandals on her feet. Her hair was swept up beneath a helmet that covered the top of her head. Her arms were bare and slender, but her strength was evident. One hand rested on her right hip, the other hand was outstretched in greeting. She was the goddess of war and wisdom, strong, courageous, and independent, none of which I felt.

Case blew away the dust he’d scraped off, uncovering a small brass plate attached to the bottom of one of Athena’s soles. I knelt down for a closer look as he wiped off the brass with his palm. “There’s your marking.”

I squinted at the etching but couldn’t make sense of it. “Is that in Greek?”

“I usually skipped Greek school. Does that mean the statue’s an authentic Antonius?”

“She’s authentic, all right, and worth a small fortune.”

As he hoisted the sculpture back to its standing position, I stared at it in awe, my heart racing as the words small fortune echoed in my head. We owned an authentic Greek Antonius? Surely Pappoús wouldn’t mind selling now. And just think what they could do with that money to spruce up the interior of their outdated diner.

Case held out a hand to help me up. “There’s one more thing you should know about her, Athena.”

He brushed dirt off the statue’s exquisite marble face. “She’s mine.” 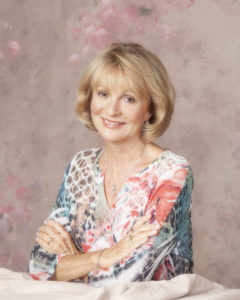 Kate Collins is the New York Times bestselling author of the Flower Shop Mystery series. After publishing numerous historical romances, Kate penned the long-running mystery series, three books of which were made into Hallmark movies starring Brooke Shields. An Indiana native, Kate graduated from Purdue University with a master’s degree in education. When not growing roots at her computer, Kate loves to garden. Other passions include yoga, reading, spending time with family and friends, sampling great wines and fine dark chocolate, and enjoying every moment of life. Kate lives in Northwest Indiana and Key West, Florida. Visit her online at KateCollinsBooks.com.