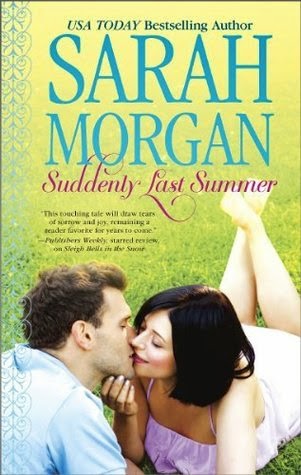 About Suddenly Last Summer by Sarah Morgan:
USA TODAY bestselling author Sarah Morgan introduces another irresistible O’Neil brother who’s more tempting than dessert and twice as sinful!
Fiery French chef Élise Philippe is having a seriously bad day. Not only have the grand opening plans for her beloved café fallen apart, but Sean O’Neil is back in town and looking more delectable than ever. Memories of the electrifying night they shared last summer leave Élise very tempted, but she knows all too well that eventually Sean will be leaving…again.
Being back in Vermont—even temporarily—is surgeon Sean O’Neil’s worst nightmare. Returning home to the Snow Crystal Resort means confronting the guilt he feels about rejecting his family’s lifestyle years ago. But discovering that Élise is still in Vermont and still sets his blood racing is a very welcome distraction! Remembering last summer and how good they were together is going to make walking away more difficult than he could imagine….

MY WRITING LIFE
By Sarah Morgan
A few weeks ago the school my son attends had a ‘take your child to work’ day. His father was working on a confidential project that didn’t allow the presence of a teenager, so I was the one with the responsibility for giving him a taste of a working life. Except that a writer’s working life doesn’t look the same way as most. My son thought he’d hit the jackpot and that a day spent with me would mean lounging around in his pajamas fiddling with a laptop (I’ve no idea where he got that impression).

I admit that to an observer what I do is fairly boring. There isn’t much to see. No feather boas, no lying in the sun dreaming (well, some of that but only when I’ve met a deadline), just long hours spent alone at a computer screen. Most of the excitement is in my head. Writing requires buckets of self-motivation and the willingness to work hard day after day (and sometimes night after night) no matter what obstacles life throws in your path. I set myself a minimum daily word count because that works for me. I know that providing I stick to the word count I don’t have to worry about the deadline and I can then fit the intrusions of real life around the writing without panicking. In reality I tend to write during ‘office hours’ and then again late evening. I do whatever the book needs. If a book is going well I’m going to have more weekends off than if it’s a struggle.

Of course a writer’s life isn’t all about the writing and a book isn’t produced in solitary confinement. It’s a team effort. And the work doesn’t stop with the book. Writers have to balance writing with promotion, as my son discovered when he spent the day with me. He mailed out copies of my new release, Suddenly Last Summer, helped with research and used his computer skills to update my website. By the time the day ended I was starting to wish he worked for me full time (and he made great coffee!).

Writing may be a slightly unusual way to make a living, but to me it’s the best job in the world.
Sarah
xx

About the Author:
USA TODAY bestselling author Sarah Morgan writes hot, happy contemporary romance and her trademark humour and sensuality have gained her fans across the globe. She has been nominated three years in succession for the prestigious RITA© Award from the Romance Writers of America and has won the award twice, in 2012 and 2013. RT Book Reviews has called her ‘a magician with words’ and she has made numerous appearances in their ‘Top Pick’ slot. Sarah lives near London, and when she isn’t reading or writing she loves being outdoors, preferably on vacation so she can forget the house needs tidying. She loves chatting with readers by email and on Facebook and Twitter. More information can be found on her website.
Website | Facebook | Twitter | Goodreads


This event was organized by CBB Book Promotions.