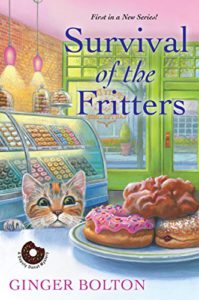 Survival of the Fritters by Ginger Bolton
A Deputy Donut Mystery #1
Kensington • January 30, 2018

Emily Westhill runs the best donut shop in Fallingbrook, Wisconsin, alongside her retired police chief father-in-law and her tabby Deputy Donut. But after murder claims a favorite customer, Emily can’t rely on a sidekick to solve the crime—or stay alive.

If Emily has learned anything from her past as a 911 operator, it’s to stay calm during stressful situations. But that’s a tall order when one of her regulars, Georgia Treetor, goes missing. Georgia never skips morning cappuccinos with her knitting circle. Her pals fear the worst—especially Lois, a close friend who recently moved to town. As evening creeps in, Emily and the ladies search for Georgia at home. And they find her—murdered among a scattering of stale donuts…

Disturbingly, Georgia’s demise coincides with the five-year anniversary of her son’s murder, a case Emily’s late detective husband failed to solve before his own sudden death. With Lois hiding secrets and an innocent man’s life at stake, Emily’s forced to revisit painful memories on her quest for answers. Though someone’s alibi is full of holes, only a sprinkling of clues have been left behind. And if Emily can’t trace them back to a killer in time, her donut shop will end up permanently closed for business…

Trouble in a Small Town

In SURVIVAL OF THE FRITTERS, one of Emily’s customers doesn’t show up as expected at Deputy Donut, the café Emily owns with her father-in-law, Tom. Emily and the woman’s friends go to the woman’s house and find that she’s been murdered.

Fallingbrook, Wisconsin, the town where Emily lives, is small, but not tiny. Many of the members of the Fallingbrook Police Department spend their breaks at Deputy Donut. They know and like Tom, who recently retired as police chief. One of Emily’s best friends is on the police force, and Emily’s other best friend is an Emergency Medical Technician. All three of the women know the fire chief, who is also a regular at Deputy Donut. Emily knows, but is deliberately not close to, a male detective. Emily’s coffee and donut shop is a good place to pick up rumors, gossip, and clues . . .

The town where I lived as a child was smaller than Fallingbrook. One of my classmate’s fathers was the chief of police, and one of my best friend’s fathers was the other police officer. Crime in that two-police-officer town was pretty much unheard-of.

But that didn’t mean it couldn’t be imagined . . .

We lived on a hill. From our house, we could see most of the front yards and some of the porches on the street leading up to our house. We could stomp our feet on our wooden front porch and be heard down the hill. At midnight on New Year’s Eve, everyone went out and stomped on wooden front porches and yelled, “Happy New Year!” The sounds carried uphill, too. It was all fun and neighborly.

One night, not a New Year’s Eve, I was babysitting on the street down the hill, in one of those houses where a portion of the front yard was visible from our house. My dad was working the night shift, but my mom was home.

It was past midnight. My charges were sound asleep. Bleary-eyed, I had put aside my homework and was watching old movies on TV.

Someone ran up onto the front porch, pounded on the front door, and then ran noisily down those wooden front steps. Cautiously, I approached the front door. I didn’t open it.

Someone pounded on the back door. And then on the side door. . .

The phone was on a landing halfway up the stairs. I crept up there, positioning myself between the front door and the sleeping kids. I would protect them with my last breath.

Positive that I was already on my last breath, I called my mom and told her in whispers that someone might be trying to break into the house where I was babysitting. Maybe she could monitor the situation from a block away, up the hill.

She called the police. The police station (actually, a desk in one corner of the fire station) was also about a block away, in another direction.

Minutes later, the pounding on various windows and doors ceased. The doorbell rang.

My friend’s father was the policeman on duty that night. All was okay, he told me. When he’d parked in front of the house, his daughter and another of my friends had crept out of the bushes and fessed up. They’d merely been trying to tease me.

Maybe they didn’t understand the kind of imagination I had.

These days, I put that imagination to (possibly) more worthwhile uses, writing about crime, citizens, and police officers in the fictional town of Fallingbrook, Wisconsin. And about coffee, cops, donuts, and a cat named Deputy Donut.

What pranks did you and your high school friends play on each other? 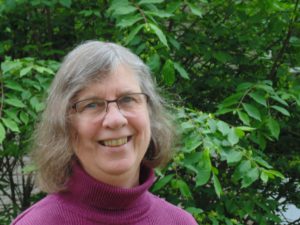