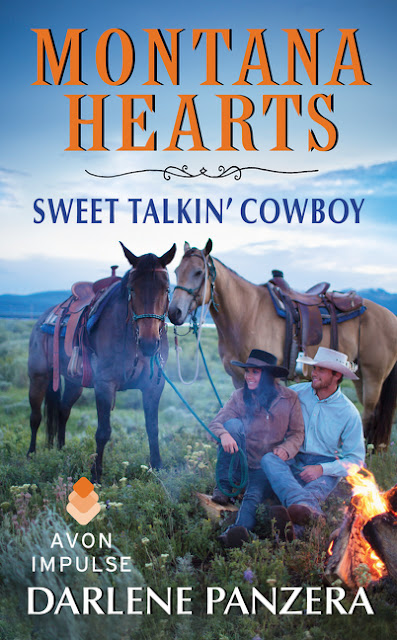 Darlene Panzera continues her heartwarming Western series with a roughed-up cowboy, the feisty girl next door, and the deal that brings them together

If it wasn’t for an injury to his leg, Luke Collins would be riding rodeo broncos all day, every day. Until he heals, he’s determined to help his family’s guest ranch bring in money any way he can. But when a cranky neighbor gets in the way of his goal, Luke turns to the only person he knows can help: the gorgeous, rodeo-barrel-racing spitfire next door.

It’s no secret: Sammy Jo’s father is a pain in the neck. But if anyone can persuade him, it’s her. So when Luke asks for help, Sammy Jo is more than willing to make a deal with the handsome cowboy. The cost? He’s gotta get back up on that horse—with Sammy Jo’s help, of course.

As teamwork reveals a deeper connection, Luke finds himself falling for the beautiful girl next door. But to win her heart? He’ll just have to do whatever it takes.

A loud scuffle sounded from within the cabin, followed by a thud, as if something had bumped against the interior wall. Luke Collins stopped his trek down the dirt path in front to listen and wondered who or what was inside. The two unfinished cabins at the end of the row on his family’s guest ranch were supposed to be empty.

He glanced down at his two-and-a-half-year-old niece and tightened his hold on her small hand.

“What’s what?” Luke asked, keeping his tone light to hide his alarm.

Another thud creaked the woodwork beside them.

Luke’s gut tightened as he noticed the front door had been left ajar. “Could be a squirrel,” he told her. Then he remembered the other creature they’d found in a cabin the month before and forced a smile. “Or a skunk.”

Luke nodded. “Yes, skunks smell pee-yew. Stand back while I check and see.”

The first of the two unfinished cabins had been framed, roofed, and sheeted with plywood; nearly complete. He stepped onto the wooden porch and adjusting his weight to his good foot, pushed the door in with the tip of his cane. Although he’d never dreamed he’d be using an old-man stick while still in his twenties, the cane did come in handy from time to time and provided him with a ready weapon—if ever he should need one.

The hinges on the door were new and didn’t screech like some of the older cabins when opened. Luke waited a second to see if anything would run out. Nothing did, but another bump sounded on the inside wall, letting him know something was in there.

Something a whole lot larger than the creatures he’d mentioned to his niece.

A shot of adrenaline coursed through his veins and glancing over his shoulder, he told Meghan, “Go over to the garden and stay with your great-grandma for a moment.”

He watched until the toddler had joined the eighty-year-old white haired woman a safe distance away. The day before, a few of the guests at Collins Country Cabins had reported seeing two men in black ski masks looking through their window while they were undressing. What if the peeping toms were holing up in this unfinished cabin?

Luke pressed himself against the outside wall and strained his ears to listen, but all was silent. Then, despite the limp from his left leg, he used the stealth he’d maintained from his past military training to move inside.

His first glance around the rough interior revealed a man’s jacket lying on the floor. The savory scent of pepperoni pizza permeated the air. He heard a soft murmur of voices and spun toward his right, his cane raised high, ready to strike. And standing not ten feet away from him there was indeed a man…with his arms around his older sister.

Bree jumped away from her fiancé, Ryan Tanner, with a start. “Luke! What are you doing here?”

“My job,” he said, shooting them each a grin as he lowered the cane. “Which is more than I can say for the two of you, unless you’ve added kissing to your list of ranch duties.”

Ryan chuckled and wrapped an arm around Bree’s shoulders. “Absolutely. No cowboy can work at peak performance without a few stolen kisses.”

“If you say so,” Luke said, unconvinced.

“I worked all morning on the finances and future bookings,” Bree informed him. “And Ryan doesn’t have to lead the mini round-up until tonight.”

Meghan peeked her blond, double-pony-tailed head through the doorway. “No pee-yew?”

“Looks like Delaney has you working hard,” Bree teased, referring to their younger sister. “She’s got you baby-sitting?”

Luke picked Meghan up with one arm and lifted her onto his shoulders. “Del’s getting ready to take a few guests on a trail ride, and Ma, Dad, and Grandma plan to take a trip into town, so Meghan’s gonna watch me work. I need to finish siding this cabin and continue framing the next.”

Bree gave him an earnest look. “We need the cabins finished before the Hamilton wedding in August.”

“Don’t I know it.” His family was depending on his carpentry skills to get the job done and reminded him at every turn.

Luke couldn’t blame them. As co-owners of Collins Country Cabins, they each needed the large amount of money the wedding with its 100-person guest list would bring in. Especially after their previous ranch managers fled at the beginning of the summer season with most of their cash. Their father had trusted Sue and Wade Randall, but when a fall from his horse landed him in the hospital, the couple used the opportunity to embezzle as much as they could.

“When are you going to start planning your own wedding?” Luke asked, trying to take the focus off himself.

Bree glanced at Ryan and smiled. “Sammy Jo agreed to help me plan an engagement party set for the end of next month, but the actual wedding won’t be for another year.”

Ryan nodded. “I tried to convince her to marry me now, but she says she needs time to plan out all the details.”

“I just want it to be perfect,” Bree said, her cheeks coloring. “And I’m hoping the Hamilton wedding will give me some good ideas. You know, I thought we could decorate all the guest cabins with white garlands and…” Bree’s voice trailed off and Luke watched her gaze drift toward his cane. “Of course I’ll do all the decorating. I don’t expect you to have to get up on a ladder, Luke. In fact, why don’t you let Ryan and I help you right now?”

Luke stiffened. “Nope. I’ve got this. No offense, Bree, but you don’t know the first thing about construction.”

“Well, then, why don’t you let me watch Meghan,” she persisted, “so she doesn’t get in your way and—”

“Trip me?” Luke frowned. “No, I promised little Meggie that she and I would spend the afternoon together.”

Bree pursed her lips and her gaze drifted toward his cane again. “But it would be easier if—”

He shook his head. “The days are longer now that it’s the tail-end of June. I’ll get it done,” he promised.

Without anyone taking pity on me.

He knew his sister didn’t mean to look at him like that, but he and his siblings hadn’t seen each other for close to a year before they returned to Fox Creek to help out on their family’s Montana guest ranch six weeks before. And up till then, he’d kept his injury to himself.

They still weren’t used to the idea he needed a cane to get around, but then again, neither was he. The sooner he got the money for the knee surgery, the better, except…he cringed every time he thought of being knocked out for the procedure.

Greg Quinn, one of his friends in the army, survived a horrendous helicopter crash only to die twenty-four hours later due to complications from the meds used to put him to sleep prior to surgery to remove a damaged kidney.

Luke swung Meghan off his shoulders and in one swift move, set her back on her feet. “Like I said, I’ve got it handled.”

“Okay, then,” Bree said, her voice still hesitant. A second later she smiled. “If you do need help, you know where you can find us.”

“Yes, I do.” Luke glanced down at his niece. “We’ll leave them be and work on the other cabin,” he told the blond-haired cutie. “The other one’s more fun anyway.”

Back outside, Meghan giggled as she ran toward the open slatted two-by-fours framing up the walls of the cabin next door. “You can’t catch me!”

Luke hobbled along with the help of his cane to chase after the child, but his mind remained back with Ryan and Bree.

He was happy for them. He was. They’d all grown up together and Ryan Tanner was a good man. With money. His family owned the Triple T cattle ranch, largest in Fox Creek, maybe largest in all of Gallatin County.

But only six weeks had passed since their father had been injured in a fall from his horse and Luke, Bree, and Delaney had come home. Only six weeks since their grandmother offered them each part of the ranch profits if they agreed to stay. Six weeks since Bree and Ryan had reunited after years of being apart—long enough for Ryan to have a seven-year-old son.

And now, as of last night, they were engaged. How crazy was that?

There was no way he’d ever get engaged to someone after so little time together. At least they were planning to wait a year before going through with the actual wedding. Bree said she needed time to plan but he hoped it also gave her enough time to make sure she was doing the right thing.

Of course, he had to admit she and Ryan seemed meant for each other. He glanced down at his leg. Maybe after he saved enough money and had the surgery he needed to carry his weight, he’d consider dating again. But not before then. Not until he was whole. The last thing he needed was for a country cowgirl to remind him with every soulful glance that he was damaged goods.

And not the hair-raising, high-flying, bronco-bustin’ cowboy he used to be. 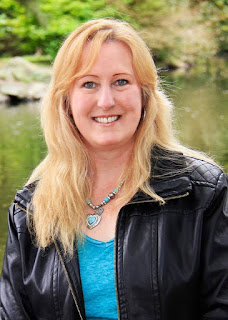 DARLENE PANZERA writes sweet, fun-loving romance and is a member of the Romance Writers of America’s Greater Seattle chapter. Her career launched when her novella “The Bet” was picked by Avon Books and New York Times bestselling author Debbie Macomber to be published within Debbie’s own novel, Family Affair. Darlene says, “I love writing stories that help inspire people to laugh, value relationships, and pursue their dreams.”

Born and raised in New Jersey, Darlene is now a resident of the Pacific Northwest, where she lives with her husband and three children. When not writing she enjoys spending time with her family and her two horses, and loves camping, hiking, photography, and lazy days at the lake.