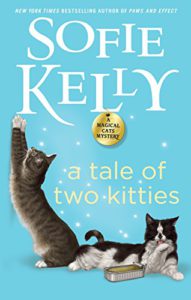 In this charming mystery from the bestselling author of Paws and Effect, two magical cats have powers of detection that prove indispensable to librarian Kathleen Paulson…

With a well-placed paw on a keyboard or a pointed stare, Kathleen’s two cats, Hercules and Owen, have helped her to solve cases in the past—so she has learned to trust their instincts. But she will need to rely on them more than ever when a twenty-year-old scandal leads to murder…

The arrival of the Janes brothers has the little town of Mayville Heights buzzing. Everyone of a certain age remembers when Victor had an affair with Leo’s wife, who then died in a car accident.

Now it seems the brothers are trying to reconcile, until Kathleen finds Leo dead. The police set their sights on Leo’s son and Kathleen’s good friend Simon, who doesn’t have much of an alibi. To prove her friend innocent, Kathleen will have to dig deep into the town’s history—and into her sardine cracker supply, because Owen and Hercules don’t work for free…

Have you ever been inside a Carnegie library? It’s possible that you have. A Carnegie library is one that was built with money donated by Scottish-American industrialist Andrew Carnegie. My childhood library was a Carnegie building. So is the Mayville Heights Free Public Library in the Magical Cats mysteries.

Andrew Carnegie attributed his success in life to the fact that he had access to lots of books when he was a child. However, in the late 19th century, most library use was by subscription, which meant books were only available to people who had the money to pay. Carnegie believed that libraries should be available to everyone. He used part of his fortune to build more than 2500 of them around the world, the earliest ones in places where he had a personal connection, including the very first one in Dunfermline, Scotland where he was born. The first American Carnegie library opened in Braddock, Pennsylvania in 1889. It was designated a National Historic Landmark in 2012.

Most of the Carnegie libraries have a similar design. They were built from stone or brick with more than one set of stairs at the entrance, very much in the style of the times. The steps up to the entry way represented Carnegie’s belief that a person can be raised up by learning. The building in Dunfermline features a stylized sun at the entrance with the motto, “Let there be light,” a detail I gave to the library in Mayville Heights as well.

A community had to meet a number of requirements to receive a Carnegie library grant. Not only did it have to show a need for a library and agree to use the building only for that purpose, it also had to provide the land and pay for the annual operating costs. Carnegie and his assistant, James Bertram, fielded thousands of requests for grants. Some were turned down because they felt the town or city already had an adequate facility or because the community wasn’t willing to commit the funding for running the library. However sometimes a community turned down a grant. Saskatoon, Saskatchewan refused a grant because they were looking for more than twice the amount Carnegie had offered. Several places said no because they had problems with his business practices and his role in the Homestead Steel Strike of 1892.

According to some estimates, by the time all the library grants had been given out, Andrew Carnegie had spent close to 60 million dollars. More than half of the buildings in the US, built more than a century ago, still serve their communities. Today Carnegie libraries continue to follow Andrew Carnegie’s mission for them, acting as sources of information and education, connecting the community with materials, technology and services for the 21st century. No word on whether any of them have a couple of Magical Cats dropping by!

A Tale of Two Kitties by Sofie Kelly is the ninth installment in the Magical Cats mystery series. Though I have only read the first book in the series, I was easily able to jump right into this one and enjoy the mystery…as well as the magical cats! Since I work at a library (and love libraries), it was so fun to have a main character who is a librarian. I loved all those little library tidbits in the story.

The mystery was one that kept me guessing from start to finish. I quickly got lost in the story and didn’t want to put this one down. I really need to read more of the earlier books; I think I’ll love them! If you enjoy cozies with a bit of a supernatural touch, you have to check this book (and series) out. Libraries + cats + magic + cozy mystery = a perfect read. 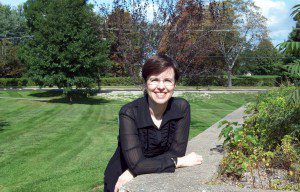