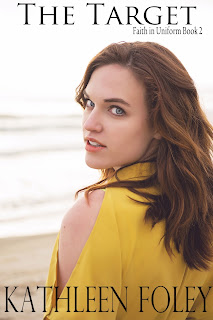 Brittany Thompson was the daughter of a well respected United States Senator and the director for the CIA. She was the sister of Special Agent Megan Stanley, the CIA agent who brought down a feared terrorist organization. As much as she dislikes the Central Intelligence Agency, it seems to surround her wherever she goes.
So who in their right mind would dare to make her “the target”?
Panicked, Brittany reaches out to the only person she knows she can trust, the only one who would drop everything to save her: Special Agent Stanley. But with the phone call to her sister comes surprises that make Brittany sick and it isn’t long before more than one agent is sucked into whatever trouble is following her.
Who is following Brittany Thompson, will the agents charged with her safety be successful, and who is the real target here?

Join us for the release of Kathleen Foley’s book The Target. We’re going to party it up Monday September 2nd from 7-10 EST. Plus we have an extra special live video event taking place the last 30 minutes of the event.