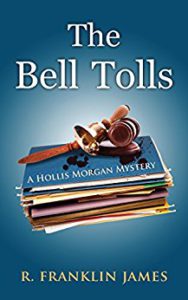 Hollis Morgan has survived imprisonment, received a pardon and persevered to finally become a probate attorney. Tough as she is, her newest case will further test her mettle. She discovers her client, Matthias Bell, is a deceased blackmailer whose last wish was to return the damaging documents letting his victims off the hook. It falls to Hollis to give them the good news. But it becomes apparent that Bell was murdered, and the victims of “Bell’s tolls” are now suspects.

Hollis’ white-collar criminal past has left her with keen survival instincts. A gifted liar, she knows a liar when she sees one. A lot of people in this case are lying and one is a killer.

On top of that, she’s also representing a dying stripper, a wealthy widow whose estranged daughter spurns her attempts at reconciliation, but whose husband sees the potential inheritance as mending all wounds.

Clients aside, Hollis is defensive and wary. Her mother, who hasn’t spoken to her for years, needs a kidney, and Hollis is a match, but neither are ready to put away the past. With Hollis’ fiancé and emotional support off on an undercover mission for Homeland Security, she must count on her own survival instincts. She is swept along on an emotional roller coaster as her absent love and her family’s coldness take their own toll.

Work is her salvation. The specter of a killer keeps her focused. Hollis has always had to rely on her wits, but now she finds that others who don’t have her well-being in mind are relying on them as well.

Book 5 in the Hollis Morgan Mystery series, which began with The Fallen Angels Book Club.

What’s In a Name

Names are critical to good fiction. As a writer you want to do whatever you can to keep the reader from putting down your book. Wrong naming can create an opportunity to “stop” the reader and instead of turning the page and reading forward, they must scratch their head and question the author’s motivation and meaning. Note it’s the author’s motivation that is question and not the characters—the reader is pulled out of the story, and may have put the book down.

Names do matter, and one of the quickest ways that fiction spoils itself is by having a name that doesn’t fit. There are always the sometimes overdone ironic names such as the wrestler named “Tiny,” the pathetic misfit called “Ace,” etc. A name can’t do all of the work of character building, but it’s a critical element in putting together and developing compelling characters we care about.

The Power of a Name

Tone:
The sound of the name adds tone to the character. While a stone-faced character might well be called Stony, he’s probably more interesting if he’s a Mack or Dirk, which are both “hard” names. A Pippa in a romance or young adult fiction will set a different tone than Stella or a Margo.

Occupation:
We expect a plumber or repairman to be named Danny, not Danforth, or Fred instead of Frederick. An attorney or stockbroker will more likely be Charles rather than Charlie, or Lawrence instead of Larry. We’d probably be more comforted to have a doctor named Eleanor instead of Muffy, or an airline pilot named Virginia rather than Brittany.

Demographics:
A character’s name is often the first and most vital clue to a character’s identity, which may or may not be important to the story. Vinnie, Ian, Darshan, Mohammed, Yasmine, and Ashanti are probably going to create reader expectations. Names also carry generational weight: we envision Blanche and Vivian as older, more serious people than we do Dakota, Madison, or Ashley.

Naming pitfalls:
• Do too many names have the same ‘sound’?: Example: Mike, Jake, Nate or Kathy, Lacy, Tracy
• Too many with the same first initial? Example: Bob, Bill, Barney, Biff
• Does a name seem realistic even if it’s entirely made up? Example: Sally Lockindorf
• Does the name fit the time period? Example: If you need a name for an 18-year-old sales girl in the 1950s, you know enough not to choose Sierra or Courtney. Check for names in the era you’re writing. A Depression-era shop girl who needs a fitting name could go by Myrtle or Jane — Tiffany, not so much.

So where do you find names? Check the Internet for persons using your character’s name. Also, you may want to include a disclaimer at the beginning of your book. If you need help researching common names during a specific year try, https://www.ssa.gov/oact/babynames/. Use this list to find the most commonly used names for both boys and girls, by year or by state.

Whichever name you choose, say it out loud, and make sure it fits your story. See if it matches the character and his or her personality and, more importantly, the storyline. For your protagonist, choose a name that can hold up for an entire story, book, or even a series. 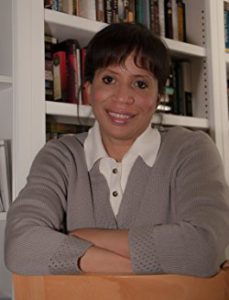 R. Franklin James grew up in the San Francisco Bay Area and graduated from the University of California at Berkeley. From there she cultivated a different type of writing—legislation and public policy. After serving as Deputy Mayor for the City of Los Angeles, under millionaire Richard Riordan, she went back to her first love—writing, and in 2013 her debut novel, THE FALLEN ANGELS BOOK CLUB was published by Camel Press. Her second book in The Hollis Morgan Mystery Series, STICKS & STONES, was followed by THE RETURN OF THE FALLEN ANGELS BOOK CLUB, and THE TRADE LIST. THE BELL TOLLS, book five was released in June 2017.

R. Franklin James lives in Northern California with her husband.

Enter below for your chance to win a paperback copy of The Bell Tolls by R. Franklin James. This giveaway is open to US residents only and will close on October 4, 2017 at 11:59 PM. Stop back daily to enter the giveaway. Good luck!!