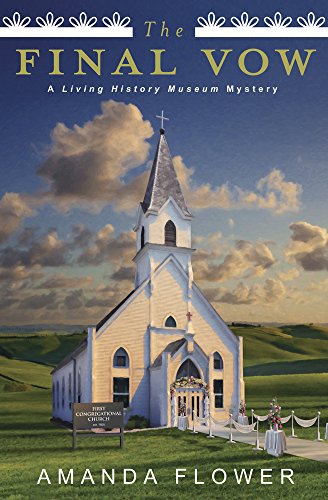 Ambitious wedding planner Vianna Pine is determined to make the bride’s Civil War-themed wedding perfect. But each time Vianna’s vision threatens the integrity and safety of the Farm, Kelsey has to intervene. And when she finds Vianna’s dead body at the foot of the church steps, everyone’s plans fall apart. With both the wedding and Barton Farm at risk of being permanently shut down, Kelsey has to work hard to save her own happily ever after.

The Animals of Barton Farm

I am an animal lover, so it would be impossible for me to write a novel and not have at least a few animal characters in it. Thankfully, The Final Vow has plenty of animal characters to entertain readers and myself. Writing the Living History Museum Mystery Series has been so much fun because it takes place on a living history farm, and as a result, there are many animals who appear throughout the series to make Kelsey Cambridge’s life as the Director of Barton Farm a little more exciting and a lot more frustrating.

Here are the animals to lookout for in The Final Vow:

Frankie: Hayden’s (Kelsey’s son’s) one-eyed tabby cat. He likes Hayden and hates everyone else, including Kelsey.

Tiffin: Kelsey’s loyal corgi, who takes it upon himself to herd everyone at the Farm from the sheep to Kelsey and her Farm employees.

The sheep: The small flock of sheep on the Farm who are constantly breaking out of their pen and running into the visitor center.

Betty and Mags: The temperamental oxen. No one goes into their pasture without their approval and lives to tell about it.

Gertrude and the hens: A brood of four chickens, who patrol the village side of the Farm. Gertrude the large red hen is their leader. They scare intruders and visitors to Barton Farm alike.

Each of these animals, no matter the size of the part, adds to the color and humor of Barton Farm, and The Final Vow just would not be the same without them.

Amanda Flower, a two-time Agatha Award-nominated mystery author, started her writing career in elementary school when she read a story she wrote to her sixth grade class and had the class in stitches with her description of being stuck on the top of a Ferris wheel. She knew at that moment she’d found her calling of making people laugh with her words. She also writes mysteries as national bestselling author Isabella Alan. In addition to being an author, Amanda is an academic librarian for a small college near Cleveland.