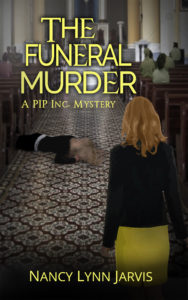 Pat quickly discovers the dead woman’s past is as complicated as her estate. And when an autopsy indicates she had two deadly toxins in her body when she died, Pat’s new case becomes not only complicated, but dangerous. 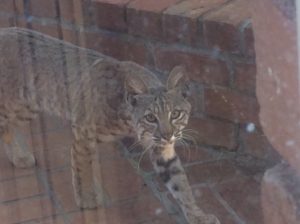 Like my protagonist, Pat Pirard, I’m a glass half-full kind of woman. But recently, it’s been difficult for both of us to keep our equilibrium. At the moment, Pat may be doing better than I am. She’s not living in a Covid word and she has pets and people to hug.

I don’t. I’m a widow who hasn’t touched another human being since mid-March. My pets are all dead except for the wild bobcat bobcat that had sort of adopted me. At the moment, I am out of my home because of the wildland fire in the Santa Cruz Mountains. I was evacuated at 1:30 am on August 18th and have no idea when I can go home and what will greet me when I do.

Pat had it rough a few months ago. In The Glass House where we met her, she had recently been dumped by her long-time boyfriend and the job she loved, the Santa Cruz County Law Librarian, had ended abruptly when the county needed to save money and she was downsized in favor of her assistant librarian. It happened the day before her thirty-fifth birthday, and about a week after she had spent every penny in her bank account to buy her dream car: a not-new sunburst yellow Mercedes convertible.
Things looked dire for Pat. But she took a deep breath, printed business card proclaiming herself Private Investigator Pat, dubbed herself CEO of PIP Inc., and hoped the attorneys she had served so well as law librarian would hire her and keep her and her pets, Dalmatian Dot and her ginger cat, Lord Peter Wimsey, from having to couch surf to survive.

She was hired, met the muscled and charming deputy sheriff in charge of the murder investigation, solved a murder and…let’s just say things were going well at the start of The Funeral Murder, her second case.

When Pat was hired by attorney Roger Drago to do some complex but seemingly not dangerous work sorting out the estate of a woman who died at a funeral, Pat thought she was only going to be doing research. Was she ever mistaken. It turned out the dead woman’s autopsy tox screen turned up the presence of two exotic poisons in her blood. Simple estate tracking quickly turned into a murder investigation, one not welcomed by the killer.

Now, Pat is relishing the turn of events in her life and falling in love. By the end of The Funeral Murder she is nursing a broken arm, taking care of a gunshot-wounded Dot, and feeding Wimsey people tuna, which he earned by…well you’ll have to read the book to find out what he did.

I’m going to have big changes in my life, too, as a result of the fire, and like Pat, I may be reluctant to start a new adventure, but I will make the best of it until it starts to be fun. That’s what we glass half-full women do after all, isn’t it? 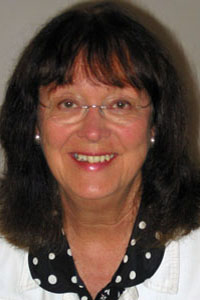 Nancy Lynn Jarvis left the real estate profession after she started having so much fun writing the Regan McHenry Real Estate Mysteries series that she let her license lapse. She’s enjoyed writing about Regan and her husband, Tom, but decided it was time to do a new series.

After earning a BA in behavioral science from San Jose State University, Nancy worked in the advertising department of the San Jose Mercury News. A move to Santa Cruz meant a new job as a librarian and later a stint as the business manager for Shakespeare/Santa Cruz at UCSC.

Currently, she’s enjoying being a member of Mystery Writers of America, Sisters in Crime, and Santa Cruz Women of Mystery.

Nancy Lynn Jarvis is giving away one eBook copy of The Funeral Murder here at Brooke Blogs. Thank you, Nancy! For your chance to win, please leave a comment on this post. Then, fill out the Google Form below. If the form doesn’t load, please CLICK HERE. This giveaway will end October 6, 2020 at 11:59 PM EST and winner will be randomly selected from all eligible entries. Good luck! 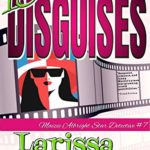