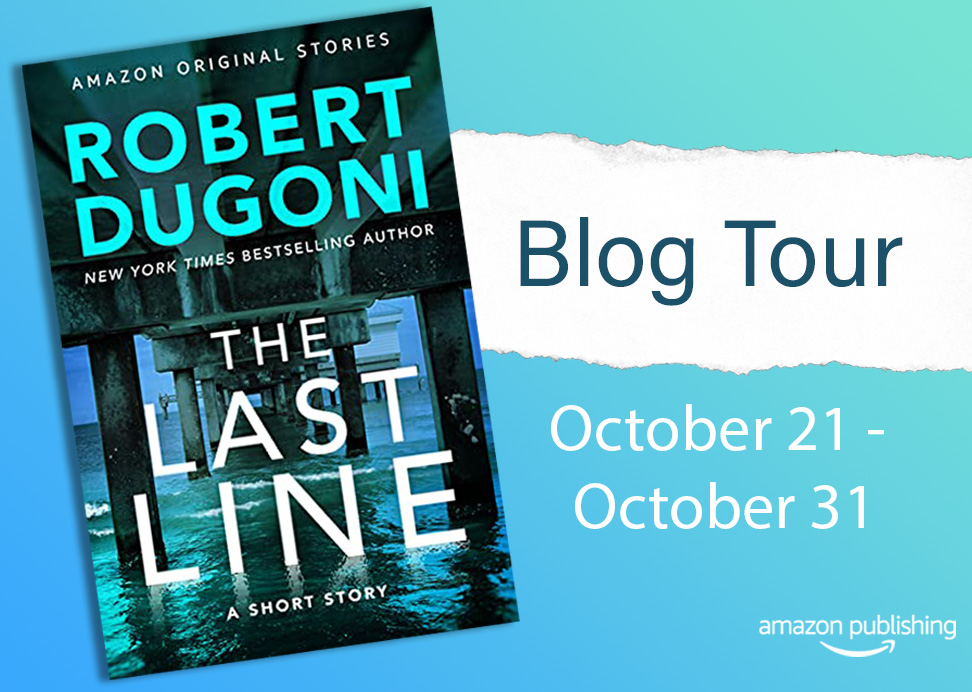 I received this book for free from Amazon, NetGalley. This review is voluntary. My opinion is not influenced in any way. 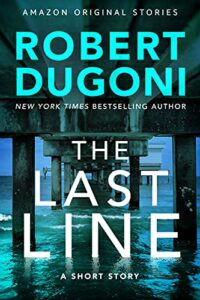 A newbie Seattle detective gets an education in corruption in a short story by Robert Dugoni, the Amazon Charts and Wall Street Journal bestselling author of the Tracy Crosswhite series.

His old life in the rearview, Del Castigliano has left Wisconsin to work homicide for the Seattle PD. Breaking him in is veteran detective Moss Gunderson, and he’s handing Del a big catch: the bodies of two unidentified men fished from Lake Union. It’s a major opportunity for the new detective, and Del runs with it, chasing every lead—to every dead end. Despite the help of another section rookie, Vic Fazzio, Del is going nowhere fast. Until one shotgun theory looks to be dead right: the victims are casualties of a drug smuggling operation. But critical information is missing—or purposely hidden. It’s forcing Del into a crisis of character and duty that not even the people he trusts can help him resolve.

The Last Line by Robert Dugoni is a short suspense/thriller story featuring Detective Del Castigliano working his first case as a homicide detective in Seattle, WA. I have read an earlier short story as well as the first book in the Tracy Crosswhite series, but it has been about 7 years since I read them. Still, you can absolutely read this as a standalone short story/prequel. This story takes place before Tracy arrives at the Seattle PD. It will definitely whet your appetite for the series!

The Last Line hooks you right from the beginning – the mystery of two bodies that appeared to be drowning victims coupled with Del attempting to build a new life in Seattle and move on from his failed relationship. When I started reading this, I didn’t want to stop. I had to know how in the world Del was going to move forward with the case with so little to go on. If you enjoy police procedurals, this is an enjoyable quick read. I appreciated how well Mr. Dugoni developed the plot and characters in such a short story.

Del drove from the parking garage into a blustery and cold November morning—cold being relative. In Madison, anything above freezing was balmy for November, though Del was starting to understand what Seattleites meant when they said it wasn’t the temperature that chills you; it’s the dampness. He could feel the cold in his bones. A stiff wind rocked his metallic-blue Oldsmobile Cutlass.The wind had started blowing late the prior evening; branches of a tree scraping against Del’s bedroom window had kept him awake half the night.

He drove from Capitol Hill with the defroster on high and worked his way around the southern edge of Lake Union, noting marinas and water-based businesses. He pulled into a parking lot where Moss stood beside a black Buick LeSabre, sipping coffee and towering over a patrol officer. Moss was almost as big as Del, who stood six foot five and weighed 250 pounds.

Del pulled up the collar of his coat against the howling wind as he approached the two men. He recognized the green logo on Moss’s Starbucks coffee cup, the company name taken from Captain Ahab’s first mate on the Pequod, the whaling ship Moby Dick sent to the bottom of the ocean. The logo, a green siren, tempted sailors to jump overboard and drown. Neither was a good omen.

“Look what the cat dragged out. Did we wake you, Elmo?”

“Funny.” Del had heard iterations of Elmo since his teens, when the beloved puppet first appeared on Sesame Street. Moss introduced Del to Mike Nuccitelli, the patrol sergeant. “How’d you get here so quick?” Del asked Moss. He understood Moss lived in West Seattle, twenty minutes farther from the marina than Del’s apartment.

“I didn’t take time to do my hair.” Moss rubbed the bristles of a crew cut. “I’m like my name. You know. A rolling stone.”

Del knew. More than once, Moss had told him his parents bequeathed him the moniker because as a child he never remained still. Vic Fazzio had said it was more likely Moss gave himself the nickname. His Norwegian first name was Asbjorn.

“At this hour of the morning?” Moss scoffed. “Stayaway doesn’t come out this early on a cold morning unless he thinks the brass might show up and he can shine their badges with his nose.”

“Two grown men. Looks like they drowned,” Nuccitelli said. “We’re waiting for the ME.”

“What more do we know about the victims; anything?” Del asked.

Nuccitelli raised the fur collar of his duty jacket against the wind. “Hispanic is my guess, though the bodies are pretty bloated and their skin the color of soot. I’m guessing roughly late twenties to early thirties, but again . . .”

“They didn’t have any ID?” Del asked.

“Not on them,” Nuccitelli said.

“That strike you as odd—they didn’t have ID?”

“How far out is the ME?” Moss looked and sounded disinterested.

Nuccitelli checked his watch.“Should be here in ten.”

From books to movies to television, police procedurals are incredibly popular with audiences. What do you think is the appeal of these stories?

I think the appeal is readers and viewers have good guys to root for and bad guys to root against. Readers also like a good mystery. They like to see if they can solve the crime, determine the bad guy and figure out what he did and how he did it, just like the detectives. It keeps them engaged in and part of the story.

Do you recall the first detective story you ever read or perhaps you have a favorite? What was it about this type of story that made you want to write in the genre?

Years ago, I remember reading Michael Connelly’s The Poet. I don’t know if it was the first detective story I read, probably not, but it was visceral and stuck with me. I do recall reading All The President’s Men when I was in high school, and though Woodward and Bernstein were not detectives, per se, they very much functioned like detectives in that story—finding clues, trying to piece together those clues, and then solve the puzzle. In many ways, that’s what a good detective story is all about: solving a puzzle. I think that is one of the appeals to writers, as well as readers and viewers.

Del Castigliano, the police detective in your newest release The Last Line, has worked in narcotics, arson, sexual assaults, robbery, and now homicide. He has definitely seen the worst that humans have to offer. What keeps him sane and on the job?

For most police officers I’ve spoken with, they do the job knowing that they are keeping people safe—maybe people they know or even love. It’s a tough job and burnout can be a problem. Most detectives have to be mentally tough and can be frequently rotated to help minimize burn out. It’s one of the reasons detectives and uniformed officers, I believe, are underappreciated. It’s a tough job.

Throughout The Last Line, readers get to see Del at his worst—he faces loss, failure, insecurity, loneliness…yet we also respect him. He is honest, hardworking, and clever. How do you see him? If you were to sit down to have a beer with him, what would you talk about?

In The Last Line, I see Del as a guy trying to find his way after life has thrown him a curveball. If we sat down for a beer, I’d ask him if, looking back, he has any regrets, or if time has helped him put life in perspective and he realizes that what he went through as a young man actually helped him to get to a better place in his life.

The Last Line ends in a way that will have readers wanting more. Do you have any future plans for Del and the larger cast?

Very much so. Del is a central character in the Tracy Crosswhite series, and in Tracy #9, What She Found, the story of Del’s first case from The Last Line comes back to Tracy, who is now working a cold case and trying to figure out what happened 24 years ago.

For fans of your bestselling Tracy Crosswhite series, will they feel at home with Del as the lead protagonist? For readers who haven’t discovered Tracy yet, will they be able to dip right in?

Absolutely. The Last Line is a standalone story that predates Tracy arriving at Seattle PD. I’ve had so many readers ask me for more of Del and Faz! Writing The Last Line was an opportunity to dig into how they got started and what shaped them. I have a thought now about Tracy #10 being a cold case that Del and Faz investigated 25 years earlier and telling the story from both time periods leading up to Tracy solving the crime in the present.

What do you have coming up next?

The third book in the Charles Jenkins espionage series, The Silent Sisters, will be published, February 22, 2022, followed by Tracy #9, What She Found, which will be out August 23, 2022. Beyond that, readers can look for a new standalone legal thriller introducing criminal defense attorney Keera Duggan. I’m excited about that novel and working hard to get it finished soon. 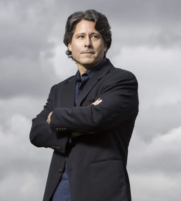 Robert Dugoni is the critically acclaimed New York Times, Wall Street Journal, Washington Post, and Amazon Charts bestselling author of the Tracy Crosswhite series, which has sold more than seven million books worldwide. He is also the author of the bestselling Charles Jenkins series; the bestselling David Sloane series; the stand-alone novels The 7th Canon, Damage Control, The World Played Chess, and The Extraordinary Life of Sam Hell, Suspense Magazine’s 2018 Book of the Year, for which Dugoni won an AudioFile Earphones Award for narration; and the nonfiction exposé The Cyanide Canary, a Washington Post best book of the year. He is the recipient of the Nancy Pearl Book Award for fiction and a three-time winner of the Friends of Mystery Spotted Owl Award for best novel set in the Pacific Northwest. He is a two-time finalist for the Thriller Awards and the Harper Lee Prize for Legal Fiction, as well as a finalist for the Silver Falchion Award for mystery and the Mystery Writers of America Edgar Awards. His books are sold in more than twenty-five countries and have been translated into more than two dozen languages.