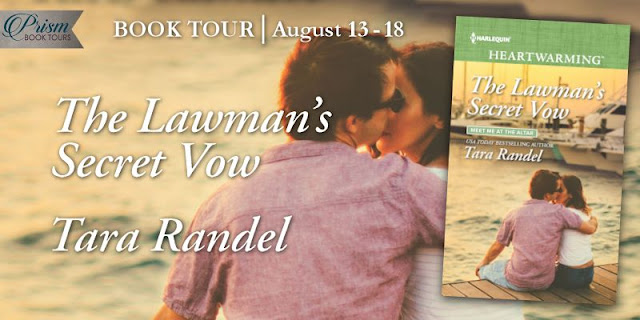 We hope you enjoyed the tour! If you missed any of the stops
you can see snippets, as well as the link to each full post, below:

…The Lawman’s Secret Vow features Dante Matthews and Eloise Archer. Both are detectives in a local police department, who have been paired up, pretending to be a newly married couple while they infiltrate a car theft ring. Problem is, they discover feelings for each other while undercover. Can they work together and keep their emotions in check as they delve deeper into the case? Or does the real danger come from falling in love?
I hope you enjoy being a part of Dante and Eloise’s journey.
―Tara
Remembrancy – Review
“Randel does a superb job in highlighting the opposites in Dante and Eloise even down to their families and upbringing. And I loved Dante and his brothers (and can’t wait to hang out with a couple of the others in future books).”
It’s All About the Romance – Excerpt
As Dante closed the door behind him, he yanked at his tie. The conversation with Chambers set his mind in motion and the idea of being weighed down in paperwork didn’t thrill him. Would there be reams more if he made sergeant? A definite check in the con list.

He’d just settled in his chair when Eloise caught his eye. She was busy writing something on a yellow legal pad. No doubt jotting down notes on a case or for a trial. She was organized that way. Making sure to cross all her t’s and dot all her i’s. Had mad computer skills he lacked. But there was an air of uncertainty about her that he understood. It made him want to coax a smile out of her. She took everything in life so seriously, not even recognizing his teasing until they were well into a conversation. Calling her Ellie was just icing on the cake. He knew it rattled her and thought it might secretly please her.
Britt Reads Fiction – Review
“This story was such an enjoyable read!…
I loved the romantic tension that developed early on between these two. The way they viewed each other and the way they related to each other felt very authentic and I really enjoyed seeing them interact together.”
E-Romance News – Excerpt
Dante cleared his throat. “And who are we exactly?”

Dante heard another quiet groan escape his new partner. A good rule of thumb when undercover was to use a variation of your real name so you wouldn’t get mixed up during the op. Eloise was going to hate this.
Rockin’ Book Reviews – Review
“This is a great story of romance, suspense and more. I brought about a great number of emotions.” – Vickie
“…a delightfully, although somewhat predictable, story. It is well-written, captivating mystery/romance novel…
The tale sustained the reader’s interest until the very last page.” – LAWonder10
Hearts & Scribbles – Excerpt
Dante was flummoxed. Plain and simple. It was the only word he could come up with to explain his current state.

He flinched when the door closed behind Brandy with a bang. Eloise stood on the other side of the room, a flicker of hesitancy in her eyes. He hated that he was the cause of her discomfort, but c’mon. She was stunning.

Again, her understated beauty captured him. He’d sensed it was there all along, just disguised under her professional work persona. Why, he had no idea.
Declarations of a Fangirl – Excerpt

They both froze. Dante’s hands on her waist, hers gripping his upper arms. By the light of the moon hovering in the clear night sky, Eloise watched Dante’s gaze search her face before moving to her lips. Her breath caught.

“Back in the truck,” he said, voice low and husky, “I wanted to kiss you. Looks like fate has given me a second chance.”
Reading Is My SuperPower – Review
“Two great protagonists with stellar chemistry. An undercover marriage with a high-stakes case. Intriguing supporting characters and lots of delightful possibilities for the series. If you love the undercover marriage trope, then you’ll love rooting for Dante and Eloise as their friendship builds into something more all while trying to catch the bad guys and secure their spots for the same promotion.”
Nicole’s Book Musings – Excerpt

The well-maintained one-story house was painted a bright yellow, with white shutters. Neatly trimmed bushes lined the length of the foundation. Two smaller windows, curtains drawn, flanked the large picture window in the center of the home. A flag with bright flowers greeted them as it swayed from a holder by the front door. Best of all, in Dante’s opinion, it had a two-car garage. He planned on moving a car he’d been working on here in order to keep up with their cover.

“What do you think?”

“It’s lovely. To be honest, I wasn’t sure what to expect. I could only pull up a picture of the outside of the house from satellite imagery.”

“Think you could live here for a couple weeks?”
Getting Your Read On – Review
“I love a good opposites attract love story and Dante and Eloise couldn’t be more opposite! I loved the clash and pull between them in almost every situation. It was great. . . . The added bit of light suspense the mystery provided help in the all around full feel of the book. I really liked it a lot!”
underneath the covers – Excerpt
She held her breath when she saw the desire and admiration in his eyes.

“I’d like us to be partners, Ellie. In real life. It’s not a decision I can make on my own, so I’m asking you to think about it.”

Her throat went dry and she had to clear it before speaking. “How do I know I can trust you?”

“By giving me a lifetime to prove myself to you.”
Book by Book – Review
“The Lawman’s Secret Vow is a great choice for any fan of heartwarming contemporary romance. I completely enjoyed the time I spent with it—seeing Eloise and Dante both playfully and professionally work their way to a happy conclusion made me smile every time I picked up the book—and now, I’m looking forward to seeing what’s next for Randel’s Meet Me at the Altar books.”
Handcrafted Reviews – Excerpt
“HEY, ELLIE. WAIT UP.”

Eloise ignored the jolt to her heart and turned to find Dante racing through the parking lot the next morning. The sun was shining, the temperature hovered in the mid seventies and Dante was calling her name. Did life get any better? She took a breath and kept her voice level. “What’s up?”

The bright morning light lifted the multiple shades of brown in his unruly hair. Dark sunglasses shaded his eyes, but not the cocky curve of his lips.

“I just found out we’re short a person for the mud run on Saturday.”

“That’s too bad.” Adjusting her purse strap on her shoulder, she was disappointed by his statement, though why, she couldn’t explain. She headed for the building.
Thoughts of a Blonde – Review
“An intense story line, filled with intrigue, danger and a happily ever after! The latest from Tara Randel packs a punch! Not only do we get the normal sweet romance that she’s known for, but we also get a boatload of mystery as they go undercover and we have to try to figure out who the bad guys are. . . . overall, it was a compellingly rich plot and gave me that happily ever after I was looking for.”
Reading On The Edge – Excerpt
Together. Right. She needed her cop face right now because she didn’t know how else to cover the riot of emotions battling inside her. Taking a deep breath, she met Dante’s shuttered gaze. “I’m good.”

“No, you’re not,” he muttered as he took her hand and practically dragged her across the lawn, his bossiness almost bringing a smile to her face.

Once inside the house, Dante said, “Let me get my wallet and keys.”

She nodded, on autopilot as she went to the master bathroom to splash water on her face. Her heart still raced and her head pounded.
Inside The Mind of an Avid Reader – Review
“I thoroughly enjoyed this book. It is not your typical Heartwarming romance. It has a small suspenseful side to it. Books with undercover work never cease to keep me enthralled. I could not put this book down. I literally even killed the battery on my tablet.”
Becky on Books – Excerpt
“How long have you been married?”

“We’re newlyweds,” Dante said, slipping his arm around her waist to tug her closer, wrapping her in the cocoon of his spicy cologne. She fought the telltale shivers she was sure would give her feelings away if Dante noticed.

“I remember those early days,” a woman said, grinning at her husband. “Every year we celebrate at the first place we met. Where’d you two fall in love?”

Eloise glanced at Dante. He met her gaze with a blank. Oh, no.
Book Lover in Florida – Excerpt
He nodded his head toward her. “Where were you tonight?”

“A new club. Twilight. It just opened and Stella’s been dying to go. There were lots of women, few husbands and many male employees. Let’s just say I was glad to call it a night. Things were getting out of hand.”

She shuddered. “Never in a million years.” She paused. “Not that I’m boring or anything.”

Dante checked the mirror again. “Didn’t say you were.”
Don’t forget to enter the giveaway below, if you haven’t already… 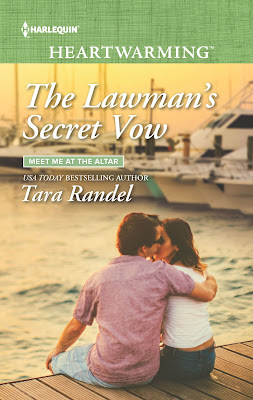 To have and to hold—

until the case is solved?

When an undercover assignment pairs laid-back Florida detective Dante Matthews with by-the-book cop Eloise Archer, he knows it won’t be easy. And not just because they’re competing for the same promotion. Now they’re living together under the same roof, and it’s getting harder to ignore his deepening feelings for his “wife.” Can he convince Eloise to partner up—for life?

USA Today Bestselling Author Tara Randel has enjoyed a lifelong love of books, especially romance and mystery genres, so it didn’t come as a surprise when she began writing with the dream of becoming published. Family values, mystery and, of course, love and romance are her favorite themes, because she believes love is the greatest gift of all. Tara lives on the West Coast of Florida, where gorgeous sunsets inspire the creation of heartwarming stories, filled with love, laughter and the occasional mystery.
Website│Goodreads│Facebook│Twitter│Amazon 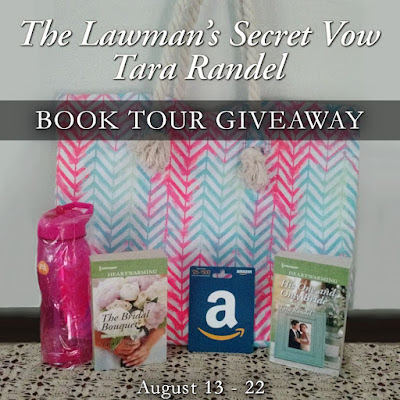 Prize #1: Beach/pool tote and water bottle, signed print copies of The Bridal Bouquet and His One and Only Bride, $25 Amazon Gift Card. (Open to US only)