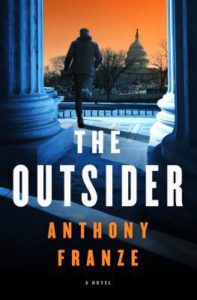 A young law clerk finds himself caught in the crosshairs of a serial killer in this breathtaking thriller set in the high-pressure world of the Supreme Court, from renowned lawyer Anthony Franze.

Things aren’t going well for Grayson Hernandez. He just graduated from a fourth-tier law school, he’s drowning in student debt, and the only job he can find is as a messenger. The position stings the most because it’s at the Supreme Court, where Gray is forced to watch the best and the brightest―the elite group of lawyers who serve as the justices’ law clerks—from the outside.

When Gray intervenes in a violent mugging, he lands in the good graces of the victim: the Chief Justice of the United States. Gray soon finds himself the newest—and unlikeliest—law clerk at the Supreme Court. It’s another world: highbrow debates over justice and the law in the inner sanctum of the nation’s highest court; upscale dinners with his new friends; attention from Lauren Hart, the brilliant and beautiful co-clerk he can’t stop thinking about.

But just as Gray begins to adapt to his new life, the FBI approaches him with unsettling news. The Feds think there’s a killer connected to the Supreme Court. And they want Gray to be their eyes and ears inside One First Street. Little does Gray know that the FBI will soon set its sights on him.

Racing against the clock in a world cloaked in secrecy, Gray must uncover the truth before the murderer strikes again in this thrilling high-stakes story of power and revenge by Washington, D.C. lawyer-turned-author Anthony Franze.

When her computer pinged, Amanda Hill ignored it. This late at night, she shouldn’t have, but she did.

All her energy was focused on tomorrow’s closing argument. Her office was dark, save the sharp cone of light from the desk lamp. She’d waited for everyone to leave so she could run through her final words to the jury. So she could practice as she’d done a thousand times, pacing her office in front of imaginary jurors, explaining away the evidence against the latest criminal mastermind she’d been appointed to represent. This one had left prints and DNA, and vivid images of the robbery had been captured by surveillance cameras.

She glanced out her window into the night. Normal people were home tucking in their children, watching a little TV before hitting the sack. Her little girl deserved better. She should call to check in, but she needed to get the closing done. Amanda’s mother was watching Isabelle, and her mom would call if she needed anything.

There was another ping. Then another. Irritated, Amanda reached for the mouse and clicked to her email. The subject line grabbed her attention:

URGENT MESSAGE ABOUT YOUR MOTHER AND ISABELLE!

Amanda opened the email. Strange, there was no name in the sender field. And the message had only a link. Was this one of those phishing scams?

She almost deleted it, but the subject line caught her eye again. Her seven year old’s name.

Her cursor hovered over the link— then she clicked. A video appeared on the screen. The footage was shaky, filmed on a smartphone. The scene was dark, but for a flashlight beam hitting a dirty floor. Then a whisper: “You have thirty minutes to get here or they die.”

A chill slithered down Amanda’s back. This was a joke, right? A sick joke? She moved the mouse to shut down the video, but the flashlight ray crawled up a grimy wall and stopped on two figures. Amanda’s heart jumped into her throat. It was her mother and Isabelle. Bound, gagged, weeping.

The camera zoomed in on Isabelle’s tear-streaked face. Amanda’s computer began buzzing and flashing, consumed by a tornado virus.

Amanda drove erratically from her downtown office to Dupont Circle. She kept one eye on the road, the other on her smartphone that guided her to the only address she could find for “Dupont Underground,” the abandoned street trolley line that ran under Washington, D.C.

Her mind raced. Why was this happening? It didn’t make sense. It couldn’t be a kidnapping for ransom. She had no money— she was a public defender, for Christ’s sake. A disgruntled client? No, this was too well organized. Too sophisticated. Common criminals, Amanda knew from her years representing them, were uneducated bumblers, not the type to plan out anything in their lives, much less something like this.

She checked the phone. She had only fifteen minutes. The GPS said she’d be there in five. She tried to calm herself, control her breathing. She should call the police. But the warning played in her head: We’ll know. And they’ll die.

She pulled over on New Hampshire Avenue. The GPS said this was the place, but she saw no entrance to any underground. It was a business district. Law firms and lobby shops locked up for the night. She looked around, panicked and confused. There was nothing but a patch of construction across the street. Work on a manhole or sewer line. Or trolley entrance. Amanda leapt from her car and ran to the construction area. A four-foot-tall rectangular plywood structure jutted up from the sidewalk. It had a door on top, like a storm cellar. The padlock latch had been pried open, the wood splintered. Amanda swung open the door and peered down into the gloom.

She shouldn’t go down there. But she heard a noise. A muffled scream? Amanda pointed her phone’s flashlight into the chasm. A metal ladder disappeared into the darkness. She steeled herself, then climbed into the opening, the only light the weak bulb on her phone. When she reached the bottom, she stood quietly, looking down the long tunnel, listening. She heard the noise again and began running toward it.

That’s when she heard the footsteps behind her. She ran faster, her breaths coming in rasps, the footfalls from behind keeping pace. She wanted to turn and fight. She was a god-damned fighter. “Amanda Hill, The Bitch of Fifth Street,” she’d heard the defendants call her around the courthouse. But the image of Isabelle and her mother’s faces, their desperation, drew her on.

The footsteps grew closer. She needed to suppress the fear, to find her family.

The blow to the head came without warning and slammed her to the ground. There was the sound of a boot stomping on plastic and the flashlight on her phone went out. The figure grabbed a fistful of her hair and dragged her to a small room off the tunnel. She was gasping for air now.

A lantern clicked on. Amanda heard the scurrying of tiny feet. She saw the two masses in the shadows and felt violently ill: her mother and Isabelle. Soiled rags stuffed in their mouths, hands and feet bound. Next to them the silhouette of someone spray-painting on the wall.

Amanda sat up quickly, and a piercing pain shot through her skull. She averted her eyes, hoping it was all a nightmare. But a voice cut through the whimpering of her family.

“Look at them!” Amanda lifted her gaze. She forced a smile, feigned a look of optimism, then mouthed a message to her daughter: It’s okay. Everything’s going to be okay.

It was a lie, of course. A godforsaken lie.

The Outsider by Anthony Franze is a fast-paced legal thriller that will have you turning pages past your bedtime. Grayson (Gray) Hernandez is an outsider. He comes from a rough neighborhood, but he got out. He attended law school and is working at the Supreme Court delivering mail.

When he happens upon a mugging and helps the Chief Justice, Gray finds himself moved up as a law clerk. This is something Gray has been dreaming of, but things get much more complicated when Gray finds himself drawn into the FBI’s investigation into a serial killer’s Supreme Court connection.

I didn’t want to put The Outsider down! I found myself fascinated with the setting and learned more than I knew about how the Supreme Court works. I was immediately drawn into the characters’ lives and I was rooting for Gray from page one. If you enjoy exciting, edge-of-your-seat suspense and legal thrillers, Anthony Franze is an author to add to your must-read list.

The Outsider grips you from page one and leaves you breathless as you follow along with Gray’s story. The Outsider is well-written and the character development is an asset to the story. I highly recommend this book.

Anthony Franze is a lawyer in the Appellate and Supreme Court practice of a prominent Washington, D.C. law firm, and a critically acclaimed thriller writer with novels set in the nation’s highest court. Franze has been a commentator on legal and Supreme Court issues for The New Republic, Bloomberg, National Law Journal, and other major media outlets. He is a board member and a Vice President of the International Thriller Writers organization.

Franze lives in the Washington, D.C. area with his family.