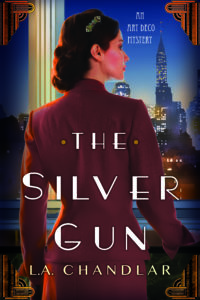 New York City, 1936. In the midst of the Great Depression, the Big Apple is defiantly striving toward an era infused with art, architecture, and economic progress under the dynamic Mayor La Guardia. But those in City Hall know that tumultuous times can inspire both optimism and deadly danger…

It’s been six months since Lane Sanders was appointed Mayor Fiorello “Fio” La Guardia’s new personal aide, and the twenty-three-year-old is sprinting in her Mary Janes to match her boss’s pace. Despite dealing with vitriol from the Tammany Hall political machine and managing endless revitalization efforts, Fio hasn’t slowed down a bit during his years in office. And luckily for Lane, his unpredictable antics are a welcome distraction from the childhood memories that haunt her dreams—and the silver gun she’ll never forget.

When Lane gets attacked and threatened by an assailant tied to one of most notorious gangsters in the city, even the mayor can’t promise her safety. The corrupt city officials seem to be using Lane as a pawn against Fio for disgracing their party in the prior election. But why was the assailant wielding the exact same gun from her nightmares?

Balancing a clandestine love affair and a mounting list of suspects, Lane must figure out how the secrets of her past are connected to the city’s underground crime network—before someone pulls the trigger on the most explosive revenge plot in New York history…

“Roarke, I think we rushed in without thinking this through,” I said in a whisper as we drew near the slimy building in the Meatpacking District, which, by the way, carried all the odors, images, and carnage that the name implied. I’d never been over here before, and I slipped my hand into Roarke’s as we slunk down a close alley toward our meeting place he’d set in advance with his informant.

The window that we had come close to was high, but Roarke would just about be able to see in if he stood on tiptoe. It was open; maybe the informant had cracked it so we could overhear what was going on inside. All I could hear at first were muffled voices. Then Roarke’s hand tightened on mine as we heard the determined, clipped steps of someone’s shoes making their way across a tile floor, closer and closer to the window we were directly under.

Roarkewhispered closely, “My informant figures we’ll be quite safe, since who would bother to look out the window?”

Suddenly, we heard something shift above us. Someone was bothering. Right this second. We ducked down in the narrow alley. I huddled up to the brick wall, willing myself to be invisible like you do in a bad dream. I held my breath as someone wrenched the window further open. Then came the reassuring sound of someone’s steps walking away.

We both slowly looked up. Low voices drifted out. I could only make out every third or fourth word. Then the voices raised, and so did the hairs on my neck as I heard my name.

“What do you mean Lane knows? Knows what?” said a very angry, high-pitched male voice that I knew in an instant was Danny’s. The guy who tried to kill me.

“Well, I’m not sure, I’m just the messenger. I’m just giving you the note. Sh—” said a nasally, fearful voice that must have been the informant’s. But something or someone had cut off what he was going to say next. Was he about to say she or someone’s name that began with S-H?

Then a couple of steps sounded, and a third voice addressed Danny in a low murmur. Just then, Roarke spied something in the window, a small piece of white paper. He slowly raised his hand and took down the paper, using careful, delicate movements. He brought it down as the voice was still murmuring. He opened the paper so both of us could read it. Written on it in sloppy writing was one word: RUN.

Roarke and I locked eyes at the same moment we heard loud footsteps decidedly coming toward our window. In one fluid movement, I turned around and we ran down the alley toward the light. Puddles splashed, things skittered in front of me. I ran like hell. Before we reached the end of the alley, a gun fired.

We were rocked in our shoes for one horrifying second. We realized it came from inside the room and we weren’t hit; we kept running. We swerved around the corner to the right. There were workers all over the place, but we stood out like an ink stain on a white shirt. With me in my bright yellow dress and Roarke in his navy pinstriped suit with white shoes, neither of us was exactly blending in.

We bounded up the street, trying to stay close to other buildings. Just as we thought we might be clear, we saw them: two guys who had gangster written all over them. One was Danny. As I turned my head to look back at him, I saw him smile that awful smirk, and the sun shone off the deep shine of his black, slicked-back hair. They started chasing after us.

I had an idea. I ran ahead and took a left going north toward the docks on the west side, Roarke running right after me. I never ran so fast in my life. My sides hurt, my legs burned. But when you’re literally running for your life, those are very minor inconveniences.

I heard the clack of our pursuers’ shoes on the pavement, urging me to keep going. Neither of them yelled; they just ran relentlessly on after us. Come on, come on, where are you? Ah, there! When I saw my target, I got a final burst of speed. I heard a funny grunt of a laugh as Roarke figured out my plan.

Just ahead was a bevy of at least twenty navy sailors making their way off their ship in port, heading out for some fun for the evening. I ran right toward the biggest guy, waved enthusiastically, and launched myself right into his surprised but receptive arms. I looked back at my shocked pursuers, turned to the stunned sailor, and planted a gigantic kiss right on his lips. He responded with vigor, and it had the reaction from his mates that I’d hoped: They all cheered. I could hear Roarke laughing behind me.

The sailor let me go and set me down carefully. I brushed my hair back, and I said as loudly as I could, “Ah, well. Welcome to New York!” They all cheered again, and we all walked happily toward Broadway. Roarke and I were careful to stay in the middle of the group of laughing, shoving, playful sailors.

About twenty feet away, I spotted Danny and his partner. They had steered clear of the sailors. He was not smiling now. Danny touched his hat in a sort of salute to my efforts, but then slowly raised his hand in a small gesture of a gun, shooting at me. He softly blew the imaginary smoke off his fingers; an unimaginative gesture, but frightening nonetheless. Then he readjusted his hat, did an about-face, and walked away. 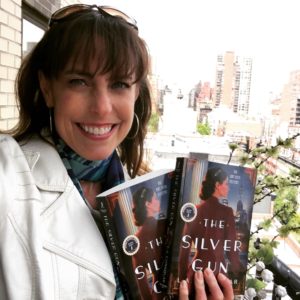 L .A. Chandlar is the author of the Art Deco Mystery Series with Kensington Publishing featuring Mayor Fiorello LaGuardia and a fresh take on the innovation and liveliness of 1930s New York City. Her debut novel, The Silver Gun released August 29, 2017, and the sequel, The Gold Pawn, will release September 25th, 2018. Laurie has been living and writing in New York City for 16 years and has been speaking for a wide variety of audiences for over 20 years including a women’s group with the United Nations. Her talks range from NYC history, the psychology of creativity, and the history of holiday traditions. Laurie has also worked in PR for General Motors, writes and fund-raises for a global nonprofit is the mother of two boys, and has toured the nation managing a rock band.