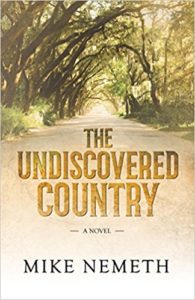 The Undiscovered Country by Mike Nemeth
Morgan James Fiction • May 15, 2018

When Randle Marks buried his abusive father three years ago, he thought he had escaped the gravitational pull of his dysfunctional family. Living in Florida, Randle was convicted of a crime he didn’t commit, served his time, wrote a book about his scientific work, and laid plans to marry his college sweetheart. Then his new beginnings were interrupted by his mother’s medical emergency. He is summoned to his boyhood home of Augusta, Georgia to face long-suppressed memories, contemptuous siblings, and his dying mother’s desperate attempts to conceal her secrets and preserve her dignity. He battles dispassionate doctors who are reluctant to waste resources on a terminal patient and discovers that his mother’s fate may not be an act of God. While investigating her medical situation, he uncovers conspiracies to hijack two estates―his mother’s modest estate, and that of a wealthy man who claims to be his birth father. To bury the past, he will have to learn the truth about the past. Randle embarks on a journey through contemporary end-of-life rituals juxtaposed with Old South traditions and the fading mores of his mother’s generation to untangle the layers of lies that enshroud his family’s history. As he learns truth after truth, Randle is challenged to solve a murder no one knew had been committed, prevent the embezzlement of a stranger’s wealth, and solve the riddle of his own identity. He is challenged to choose between greed, revenge, and reconciliation.

As Shelby wiped a drop of water from Mom’s chin and I read the Wikipedia entry, an army of medical practitioners crowded into the room. Metzger led the invasion followed by Ms. Schmidt, who peeled off and leaned against the wall next to the door. Kaplan, looking sheepish, entered with a tall bespectacled doctor I assumed to be Nieman, the ophthalmologist. Trailing behind was a fortyish doctor with patchy black hair. That had to be Rosenberg, the neurologist. At the last moment, Harrison ducked in the door, completing the team.

So, Ms. Schmidt has brought reinforcements.

Ms. Schmidt crossed her arms and adopted a haughty expression like that teacher you hated in fourth grade. Metzger spoke for the group, which was uniformly tense. “We don’t think you understand your mother’s prognosis, Mr. Marks. We’re all here to answer your questions, but I’ll summarize for you: the heart attack damaged her heart, and it’s barely pumping. She has a faulty mitral valve that will undoubtedly trigger another attack, and she won’t survive it. She’s blind, and that’s a very scary situation for her. She’s had several strokes, and they were likely connected to the heart attack.”

I glanced at Rosenberg, and he cocked his head as though to say, “Maybe.” Everyone turned toward the door then as Billy shouldered his way into the room. Beth was left standing in the hallway. Billy had the good sense to listen before speaking.

Metzger resumed his summation. “The fluid that had built up in her legs has now found its way to her lungs. If that isn’t reversed, we won’t have to wait for another A-fib episode—the pneumonia will end her life. And we’ve just discovered she has a strep infection that could be fatal.”

I glanced at Harrison. He shrugged.

Metzger was going to continue, but I cut him off. “I know she’s sick, doctor.”

“She’s very, very sick, Mr. Marks, and we can’t operate. The best thing would be to move her to a hospice where she can be cared for, a place where the family can make her last days comfortable.”

Metzger was fortunate I wasn’t holding a weapon. He saw my fury and held up a hand. “Sign the DNR, Mr. Marks. Save yourself the agony of life support and decisions about pulling the plug.” He gestured to Ms. Schmidt, who nodded. She had obviously organized this lynch party.

I waited for my body to return to a normal temperature. The group probably thought I was considering Metzger’s recommendation. I was not. As the tallest person in the room, I had a perch from which to deliver my response.

“That is a living, breathing, thinking, and feeling human being,” I said, pointing to my mother. “Assuming God has a plan, we’re all tools for His purposes. Your role as skilled tools is to heal that human being until His will overrides your skill. It’s not your prerogative to make decisions for Him, and it’s sure as hell not my job either.”

I heard intakes of breath and shuffling. Ms. Schmidt’s face contorted into an angry mask. Billy looked scared. “Let me remind you,” I continued, “that you all took the Hippocratic Oath and spoke aloud the words, ‘Above all, I must not play at God.’ I looked it up.”

Now the doctors gave one another embarrassed looks. I had them on the run. “I also looked up B streptococcus in the Wiki.” I waved my cell phone at them. “I learned that most people contract it in hospitals. Since my mother’s case wasn’t discovered until she had been here for thirty hours, I’d guess she contracted the infection right here in your hospital.”

“If she dies of the infection, you can expect a lawsuit.”

Ms. Schmidt’s mouth formed a large “O.” Metzger inched toward me, invading my space. “See here, Marks, there’s no need to threaten us. We’re all trying to do what’s best.”

“Good.” I turned directly to Metzger. “If we can clear up the peripheral problems—infections and blindness—my mother can gain strength so you can fix her heart. I am not going to let her die for lack of attention, and neither are you.”

Metzger shook his head. “Believe me, Marks, there’s nothing I can do.” He muscled his way through the crowd toward the door. Before exiting, he said, “The rest of you can do what you want.” 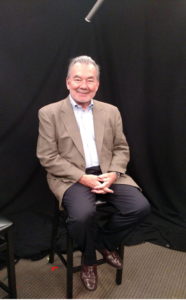 MIKE NEMETH is a novelist, blogger, former AAU basketball coach and retired information technology executive. “The Undiscovered Country” is the sequel to “Defiled,” a crime fiction thriller, which became a bestselling book on Amazon. Mike’s other works include “128 Billion to 1,” a nonfiction examination of March Madness, the NCAA Men’s Basketball Championship Tournament. Mike lives in the suburbs of Atlanta, Georgia, with his wife, Angie, and their rescue dog, Sophie.