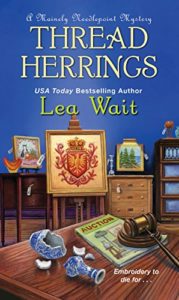 Tagging along to an estate sale with her fellow Needlepointer, antiques shop owner Sarah Byrne, Angie Curtis impulsively bids on a tattered embroidery of a coat of arms. When she gets her prize back home to Haven Harbor, she discovers a document from 1757 behind the framed needlework—a claim for a child from a foundling hospital. Intrigued, Angie is determined to find the common thread between the child and the coat of arms.

Accepting her reporter friend Clem Walker’s invitation to talk about her find on the local TV news, Angie makes an appeal to anyone who might have information. Instead, both women receive death threats. When Clem is found shot to death in a parking lot, Angie fears her own life may be in jeopardy. She has to unravel this historical mystery—or she may be the next one going, going . . . gone . . .

“What about this one?” I asked, passing several oil paintings and pointing to another large needlework. “It looks like a coat of arms.”

“It does. Although about a third of the stitching is gone. I wonder if it was done here, or in England? Stitching coats of arms was more common there. Americans didn’t have family crests or coats of arms.”

The coat of arms was in poor condition. The glass protecting it was cracked, and dirt had sifted onto the embroidery. Threads were broken or missing in several places, so only part of the crest was clear, and the linen backing was torn in several places. Still, it fascinated me.

“Is that an eagle?” I said, trying to make sense of what might have been part of a bird on the crest.

Sarah shook her head. “I’m not interested in it. No one wants someone else’s coat of arms, and that one isn’t in good enough condition to sell, anyway.”

“It could be repaired,” I suggested. “Gram is pretty good at that.” I kept looking at the crest, wondering who’d stitched it, and when. Who’d been proud of a heritage that included a coat of arms? The other embroideries were from the late eighteenth and early nineteenth centuries. I wasn’t an expert on American history, but I knew not a lot of Americans had bragged about their connections to nobility—especially English nobility—right after the American Revolution.

Or maybe the coat of arms was from another country? I didn’t know enough to guess.

“Why bother trying to repair it?” Sarah asked. “It’s not beautiful. It’s in poor condition. Its only value might have been to the person it represented, and, if it’s here, no one in his family wanted it.”

“But don’t coats of arms belong to families?” I asked.

“They were awarded to individuals, not families,” Sarah corrected. “Embroidered coats of arms originally were worn over armor, so knights could be identified when they were in competitions or battles.” She glanced at the embroidery in front of us. “I don’t see any identifying name, either of the owner or the woman who stitched it. In any case, I need to look at the other lots.” She made a couple of notes on her catalog. “I’ll bid on the four other samplers,” she said softly to me. “I’ll have to think about how high to go. That last sampler may be a budget-killer.”

“You go ahead. I’m going to wander and see what else is here,” I said.

Sarah headed for the cases of china, which had no interest for me.

I took one more look at the coat of arms. I couldn’t say exactly why, but it fascinated me. 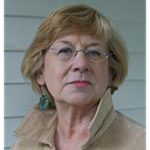 Lea Wait lives on the coast of Maine. A fourth-generation antique dealer and the author of the Agatha-nominated Antique Print Mystery series, she loves all things antiques and Maine. She also writes historical novels for young people set in (where else?) nineteenth-century Maine. Visit her at leawait.com.

One Response to “Thread Herrings by Lea Wait – Excerpt and Giveaway”