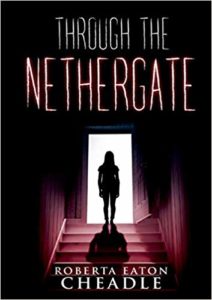 Through the Nethergate by Roberta Eaton Cheadle

Margaret, a girl born with second sight, has the unique ability to bring ghosts trapped between Heaven and Hell back to life. When her parents die suddenly, she goes to live with her beloved grandfather, but the cellar of her grandfather’s ancient inn is haunted by an evil spirit of its own.

In the town of Bungay, a black dog wanders the streets, enslaving the ghosts of those who have died unnatural deaths. When Margaret arrives, these phantoms congregate at the inn, hoping she can free them from the clutches of Hugh Bigod, the 12th century ghost who has drawn them away from Heaven’s White Light in his canine guise.

With the help of her grandfather and the spirits she has befriended, Margaret sets out to defeat Hugh Bigod, only to discover he wants to use her for his own ends – to take over Hell itself.

The main ghostly characters in Through the Nethergate

One of the recent reviews for Through the Nethergate states the following:
“This book is filled with historical tidbits told through the spirits point of view that I found completely fascinating. The author seamlessly integrates religious beliefs and historical data with immersive storytelling.” – Goodreads review

The above extract encapsulates exactly what the ghosts’ stories were intended to do, which is to immerse the reader in each ghost’s history and personal circumstances, thereby, making the reader care about them and take an interest in their future. The ghost’s come from different historical periods, but all share the facts that they are English, and they died bad deaths which resulted in their turning away from Heaven’s White Light and following the Black Dog. This choice results in their becoming enslaved to the spirit of the evil Hugh Bigod, who assumes the shape of the Black Dog of Bungay.

I learned about the various ghosts that are purported to haunt the English town of Bungay, while doing some research for the fictionalized biography I wrote about my mother’s life. One of the old inns in the town is believed to be haunted by twenty ghosts. Through the Nethergate was originally going to be a book of short stories providing a fictionalized account of the deaths of each of these ghosts, but as I wrote, the story evolved into a continuous story where the ghosts all help the heroine, Margaret, to overcome their evil master, and eventually, the devil’s goal for world domination.

The first ghost Margaret meets is Lizzie Bowlyngewho died in 1590. She was a twelve-year-old servant girl who worked at the Inn. She was caught stealing a quart jug of ale from a barrel in the cellar of the original inn and, as a punishment, she was chained to the cellar walls and left to starve to death. There is a plaque in the existing inn commemorating Lizzie’s death.

Next, Margaret comes across Rex Bacon while hiding under the stairs during a game of hide-and-seek. Rex is one of the evil ghosts who is not interested in redemption. He has aligned himself with Hugh Bigod and is takes active steps to prevent Margaret from assisting the other enslaved ghosts from escaping his power and achieving Heaven’s White Light. Rex murdered his adulterous wife and her lover when he caught them in bed together at the inn, and then committed suicide.

Margaret learns about the connection between Hugh Bigod and the black dog of Bungay as a result of a nightmare she has about the great fire of London. This dream is the first step in Margaret’s unravelling the history of Hugh Bigod and his relationship with the ghosts and the town.

James Wilson is the ghost of a monk that died in service to the Abbot of Glastonbury during the dissolution of the monasteries from 1538. James was born in Bungay and entered Glastonbury Abbey as a result of an arrangement between the Chaplain of the Bungay Priory and his parents. Margaret’s meeting with James is another vital step along her path of unravelling the mystery of the inn as he introduces the idea of a link between Bungay Priory and the black dog. It is also through James that Margaret learns about the Overworld. James describes it as follows: “The Overworld is the shadowy dimension between human life on earth and either Heaven’s White Light or the Underworld. Souls that choose not to ascend to enter the White Light, or descend to the Underworld, become trapped there as ghosts with no way of escaping. Some of the evil ghosts learn ways of subjugating other ghosts and enslaving them.”

The ghost of Katharine is another important character in Through the Nethergate. Katharine entered the Bungay Priory as a novice in 1376 at the bidding of her wealthy father. Katharine does not want to be a nun and give up having a husband and a family. She escapes with her lover but is ultimately caught and put to death. Margaret’s discussion with Katharine allows her to understand that Hugh Bigod is a devote Catholic and that only an exorcism by a Catholic priest will vanquish him.

Tom Hardy is a highwayman who used the inn as his headquarters for a short period. He is believed to have been an accomplice to Britain’s most notorious highwayman, Dick Turpin. Like Rex, Tom chooses to continue assisting Hugh Bigod with his evil plans which have changed to include Margaret and the use of her powers.

Finally, Margaret meets Henry Scarle who was employed by a wealthy businessman called Mathias Kerrison at the time of his murder in February 1787. His employer owned the Bungay Staithe Navigation on the river Waveney and his job was to look after the ships transporting corn and other goods at Whitacre Burgh. Henry is the ghost who explains everything to Margaret about the good ghosts’ slavery to Hugh Bigod and their hope that Margaret’s powers will help them escape the Overworld and enter Heaven’s White Light.

The research for each of the ghosts was time consuming, but very interesting, and I think it really adds to this story. The historical elements have been commented on by a number of readers and reviewers. 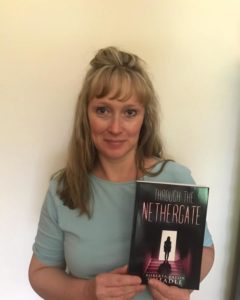 ‘I am an author who has recently branched into adult horror and supernatural writing and, in order to clearly differential my children’s books from my young adult and adult writing, these will be published under the name Roberta Eaton Cheadle. My first young adult supernatural novel, Through the Nethergate, has recently been published.