About To Fetch A Killer 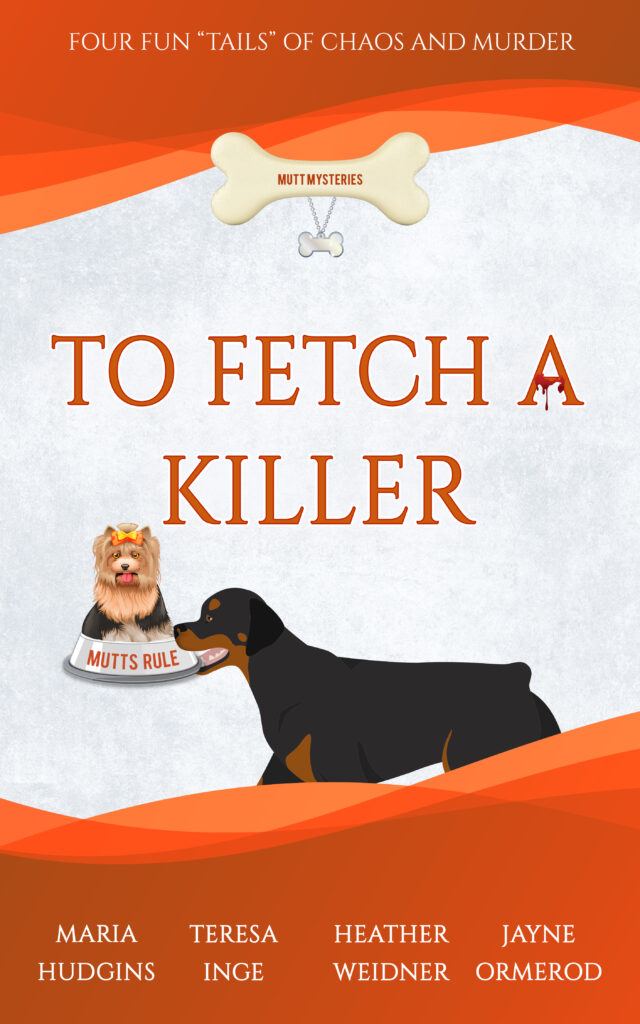 It’s a dog-meet-dog world as a pack of canines team up with their humans to solve mysteries and track down killers. Four mutt-loving authors join their talents in creating this collection of canine-themed novellas which will transport you into the chaotic world of hero dogs who have a nose for murder. Grab a leash and hang on tight…the mutts are on the loose again!

“Sandy Paws” by Maria Hudgins
The Sand Fiddler’s Writers Group has rented a beach house for its annual retreat, but the writers and their canine friends can’t get much done after murder rears its ugly head.

“A New Leash on Death” by Teresa Inge
Catt Ramsey, owner of the Woof-Pack Dog Walkers, has a knack for finding dead bodies, but when she and her pups are on the case, there’s no way the killer will get away with murder.

“Wags to Riches” by Heather Weidner
When a prickly guest ends up dead in his booth at the rummage sale, track owner, Cassidy Green and her Rottweiler Oliver have to sniff out clues and find the killer before another murder is forever linked to her business.

“Bone Appetit” by Jayne Ormerod
A dead guest at private chef Molly Perkins’s dinner party draws her and house dog Tater in a chaotic search for the secret ingredient to murder.

MARIA HUDGINS is a mystery writer from coastal Virginia and a lover of animals. She writes the Dotsy Lamb Travel Mysteries and the Lacy Glass Archaeology Mysteries. Her short stories appear in such publications as Virginia is for Mysteries, Fifty Shades of Cabernet, Murder by the Glass, and Ellery Queen’s Mystery Magazine. The two dogs, Trey and Kim, featured in this story are based on Hudgins’s beloved Bichons, Holly and Hamilton, now gone but never forgotten.

Today, she doesn’t carry a rod like her idol but she hot rods. She juggles assisting two busy executives at a financial firm and is president of the Sisters in Crime, Mystery by the Sea chapter. Teresa is a contributing author to the Virginia is for Mysteries series, 50 Shades of Cabernet, Mutt Mysteries series, Coastal Crimes, and Murder by the Glass, Cocktail Mysteries.

She resides in Southeastern Virginia with her husband and two dogs. She can be reached on all social media or by posting a comment on her website.

Originally from Virginia Beach, Heather has been a mystery fan since Scooby-Doo and Nancy Drew. She lives in Central Virginia with her husband and a pair of Jack Russell terriers.

JAYNE ORMEROD grew up in a small Ohio town then went on to a small-town Ohio college. Upon earning her degree in accountancy, she became a CIA (that’s not a sexy spy thing, but a Certified Internal Auditor.) She married a naval officer and off they sailed to see the world. After nineteen moves, they, along with their two rescue dogs Tiller and Scout, have settled into a cozy cottage by the Chesapeake Bay. Jayne’s publishing credits include two novels, five novellas, and eight short mysteries, with more coming soon. A complete list can be found on her website.

August 26 – I Read What You Write – REVIEW, AUTHOR INTERVIEW

August 28 – Escape With Dollycas Into A Good Book – SPOTLIGHT