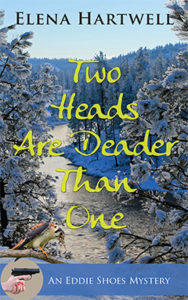 Private Investigator Eddie Shoes is enjoying a rare period of calm. She’s less lonely now that Chava, her card-counting mom from Vegas, is sharing her home. She also has a new companion, Franklin, a giant dog of curious ancestry.

Hoping for a lucrative new case, Eddie instead finds herself taking on a less promising client: her best friend from her childhood in Spokane. Dakota has turned up in Bellingham in jail, where she is being held on a weapons charge. Eddie reluctantly agrees not only to lend her friend money for bail but to also investigate who is stalking her. Soon after Dakota is freed, she disappears again, leaving Eddie to answer to the local cops, including her ex-boyfriend Chance Parker. Has Dakota been kidnapped? If not, why did she jump bail? What are Eddie’s business cards doing on the bodies of two murder victims? 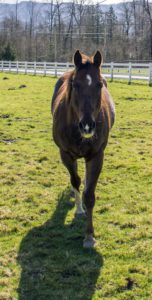 One of my horses is a five-year-old registered Paint named Radar. He’s quite the character. He can be a bit unruly, but usually with a sense of humor behind whatever he’s doing. I’ve come to realize, he’s a lot like a fictional character.

To give you an example of Radar’s sense of humor, he has a toy in his paddock. A paddock is a smaller, private area where each horse gets locked in at night. During the day, they get to go out on big pastures with the other horses. Radar’s toy is bright red and about the size of a soccer ball, with a handle on it he can grab with his teeth.

It cracks me up every time.

My characters often behave a lot like my horse.

I’ll be writing a scene, and a character I didn’t even know was in the room suddenly takes center stage. “Where did you come from?” I’ll ask. “You aren’t in this scene! Leave me alone, I’m working.”

But the character will keep whacking me on the shoulder with his big red toy until I finally pay attention and let them join in on the fun.

But still. Nothing. Just like a horse at the far end of the pasture, ignoring you. There are few things in life more painful than your horse pretending you don’t exist. Except maybe your characters pretending they don’t want to be in your manuscript today.

There’s no magic formula for working with horses. Having them come when you call requires time, patience, and consistency.

There’s no magic formula for writing a novel. It requires time, patience, and consistency.

Time. Write the first draft, rewrite, get feedback, rewrite, get more feedback, rewrite, and repeat as necessary. Patience. The publishing industry is a slow process. It can take years to write a book, more years to sell it, then anywhere from six to twenty-four months for it to finally be on out the shelves. Consistency. There’s nothing worse than having a book start off great, then end in a fizzle instead of a bang. Your characters may do surprising things, but in retrospect, their actions must still make sense. Your voice, style, and genre remain constant throughout, creating a harmonious whole.

Getting to know a new horse is a lot like writing a first draft. You aren’t sure of each other. There’s suspicion on both sides. The communication is rocky. Just like a story that has plot points, which don’t make sense, characters who do things you don’t want them to, and questions about where an event takes place, a new horse can be confused about what you’re asking for. You arrive at the paddock or the pasture every day, you work with the horse, you start to connect, things start to click. As you rewrite a first draft, the language starts to flow. The characters flesh out and the details become clear. 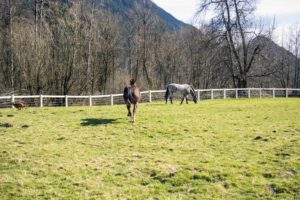 When I first brought Radar home and he would be out in the pasture, he’d usually ignore me when I arrived. He’d stay far away, eating grass, hanging out with the beautiful Friesian mare he thinks is the best thing on four hooves. I’d walk out and he’d move away, adjusting his body language so he could see me out of the corner of his eye and not quite let me catch up. It would take thirty minutes before he’d finally allow me to walk up and put his halter on.

But every day, I showed up. I spent time with him. I was patient. And consistent. And I put in the work.

Then one day it happened. I drove up to the paddock and I could see him across the pasture. He looked up. He recognized my car and after I parked, I came around the corner to find him standing at the gate, waiting for me, as if to say, what took you so long? 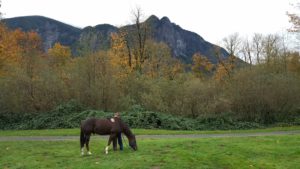 Writing takes forever, and also no time at all. Write like someone left the gate open and you’re free to run, but put in the time to learn your craft, be patient with yourself and the process, and show up every day at the pasture gate. One day your finished draft will be waiting for you.

Two Heads Are Deader Than One by Elena Hartwell is the second book in the Eddie Shoes mystery series. There’s a lot going on in this story. Eddie is contacted by a high school friend who claims she has been stalked and set up for a crime. While she’s trying to unravel that mystery, she discovers a dead body. Though the police are working on it, Eddie is doing her own sleuthing.

Eddie is a character I really enjoy. She is an unconventional character who has fought to get where she is in life. I like that things aren’t always easy for her, but she works with what she has. I’m looking forward to reading many more books in the Eddie Shoes mystery series.

Check out my review of book one, One Dead, Two to Go, on Goodreads.

One lucky Brooke Blogs reader will receive a paperback copy of Two Heads Are Deader Than One by Elena Hartwell. For your chance to win, please enter below. This giveaway is open to US entrants only. Good luck!!

Two Heads Are Deader Than One by Elena Hartwell 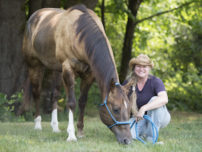 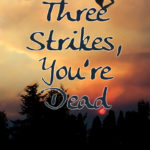 Aloe and Goodbye by Janice Peacock – Review & Giveaway
Snuffed Out by Valona Jones – Magic by Any Other Name – Guest Post + Giveaway
Murder, She Wrote: Death on the Emerald Isle by Jessica Fletcher and Terrie Farley Moran
Dial M for Meow by Ruth J. Hartman
The Case of the Parrot Loving Professor by Debbie De Louise – Spotlight & Giveaway
Sleuthing in Stilettos by Debra Sennefelder – Spotlight & Giveaway

12 Responses to “Two Heads Are Deader Than One by Elena Hartwell – Guest Post, Review + Giveaway”