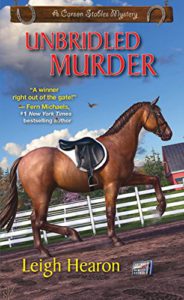 After horse trainer and rancher Annie Carson visits a feedlot in eastern Washington, she is determined to save as many horses from slaughter as possible before hightailing it back home—until she discovers the sleazy owner seemingly trampled in his corral. With the fate of the feedlot herd in her hands, Annie must navigate unfamiliar territory while trying to track down a killer and solve an increasingly tangled mystery. But unfortunately for Annie, returning to the Olympic Peninsula alive will be trickier than she ever imagined.

The Story of Lefty and Eddie

Readers may notice that Unbridled Murder is dedicated to these two fellows. Both are beautiful horses who were sprung from a feedlot in Eastern Washington for greener pastures in the summer of 2016. The abridged story of their rescue appears in the mystery, but I thought I’d fill in a few of the real-life bits.

Both horses have given me permission to use their real names (in Eddie’s case, evolving).

Two summers ago, I was with four other middle-aged, horse-crazy women in Eastern Washington to attend a horse clinic. We took an afternoon off to visit one of the many feedlots in the area that purchase horses for the sole purpose of selling them to slaughterhouses up north in Canada. I already knew I wanted my next book to address this issue, so tagged along. It was the most profoundly heartbreaking experience I think I’ve ever gone through. I knew it would be traumatic, but I didn’t anticipate my inability to stop crying days after I’d left the lot. It reminded me of when, early in my career as a private investigator, I breezily entered a medical examiner’s office to review the autopsy of a murder victim. I thought I was prepared until I saw the photos and read the report. Sometimes it’s difficult to anticipate the full reality of horrors that exist in our world.

The women I was with all had good intentions. Most of their own horses came from feedlots, and they were at this one to gauge who among the herd was most adoptable. Eddie the Thoroughbred arrived while we were there, just as depicted in my story. Lefty greeted me as he does with Annie, fastening his vivid blue eyes upon her as soon as she approaches the corral and never breaking his gaze. 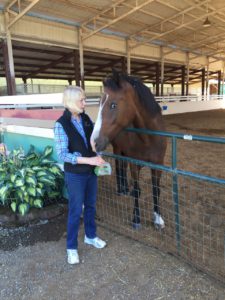 I pleaded with my goodhearted friends to do their best to find homes for these two. Lefty, despite having one hacked-off ear, was young and in good health. His prospects seemed good. Eddie’s chances were not. He was older, painfully underweight, his hooves were a mess, and he looked as if he hadn’t been exercised in years.

The next few weeks were tortuous. Neither Lefty nor Eddie (originally dubbed “Longacre” because of his racing background) were getting as much as a nibble of interest from the horse community. I knew I couldn’t bring the horses onto our farm; they needed to be isolated for at least thirty days before a vet and farrier had properly sussed them out. And, just like in Unbridled Murder, the transport van was rumored to be coming any day now.

Thirty-six hours before the van was to arrive at the feedlot, I called the last friend I could think of and asked her if she had any interest in housing two rescue horses for a month or so. When my friend Anne learned one was a Thoroughbred, she said sure, she guessed she could do that. Anne had once owned a Thoroughbred and loved the breed. She has a small farmhouse surrounded by lush, green pastures, and singlehandedly takes care of two Paso Fino mares, several highly active dogs, a couple of sheep, occasionally a steer or two, and a bunch of chickens. Most important, she had two free stalls and a private pasture that were sufficiently distant from her own healthy horses. I don’t know why I didn’t call her earlier. It could have been because Anne was 85 years old.

The horses arrived a week later. Both were skittish and scared silly by their long journey. If they knew they’d just been saved from sudden death, they sure didn’t act like it. It was difficult to even keep them on a lead line. All they wanted to do was yank grass out of their new paddock, even if it was close to midnight. 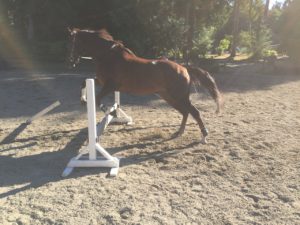 Anne did a marvelous job tending to their needs during this critical period. She promptly announced Longacre was now Eddie, in honor of Eddie Arcaro, “because Longacre is just too much to say.” My wonderful vet Dr. Cary Hills and Ali McMahon, my equally wonderful farrier, trooped out numerous times during the recovery process. Aside from the usual worms one would expect to invade a neglected animal’s body and low body weights, the worst problem was both horses’ feet. Ali extracted a 1-1/2” nail embedded nearly an inch into one of Lefty’s hooves. Eddie had multiple abscesses—five in one hoof alone.

Now, more than a year after their rescue, both horses are doing just swell. Lefty was adopted by one of my animal caretakers and is learning to be under saddle at a boarding facility in Sequim. Jolie Jeune Femme and I have fallen in love with Eddie, who’s currently in a hunter/jumper stable in Kingston where he’s learning the one gait he never had to use before—the trot. He’s now called Edward. Since he’s now regained his regal stature, it just seems more fitting.

The changes in both horses are miraculous. Edward wouldn’t let me near his face when he first arrived. In fact, he didn’t like to be touched much at all. Now I can pass by him, kiss him on his nose, and he just looks at me with kind, gentle eyes that say it’s OK for me to perform this perfectly frivolous act.

I feel incredibly sad about the many horses that were not saved in the summer of 2016 from that feedlot. And I know that fans of cozy mysteries may find the topic I choose on which to base this book hard to read at times. So here’s a spoiler alert: Unbridled Murder has a very happy ending. It’s my book, and if I want a fairy tale ending, I can write one. I just hope more real fairy tale endings for feedlot horses occur in our lifetime. 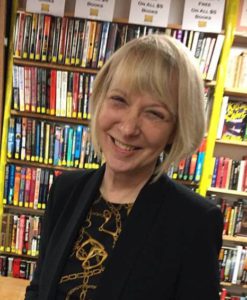 Leigh Hearon began her own P.I. agency, Leigh Hearon Investigative Services, in 1992. Her cases have appeared on In the Dead of Night, Forensic Files, 48 Hours, Court TV, City Confidential, Unsolved Mysteries, America’s Most Wanted, and CBS Evening News with Connie Chung. Hearon was an avid rider of horses throughout her childhood. She currently has a Saddlebred mare, Jolie Jeune Femme, and enjoys watching Jolie and two rescue mares cavort on a fifty-five-acre farm she shares with her husband. Visit her on the Web at leighhearon.com, on Facebook and Twitter.