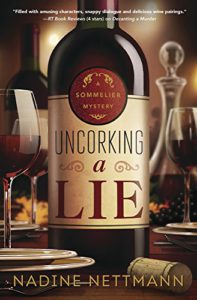 Uncorking a Lie by Nadine Nettmann

It was the kind of invitation sommelier Katie Stillwell had only dreamed about: a dinner party at the Sonoma mansion of famed wine collector Paul Rafferty to celebrate a rare bottle. Everyone enjoys drinking the $19,000 wine, but Katie realizes it’s not the vintage listed on the label.

When she confides in Mr. Rafferty, he asks her to investigate, and she soon discovers the deception goes beyond money—it includes an accidental death that might just be murder. As Katie falls deeper into the world of counterfeit wine, she learns everything is at stake . . . even her life.

My character, Katie Stillwell, and I have several things in common and one is that we both believe there’s a story in every bottle of wine. When you buy wine in a store or have it poured at a restaurant, the wine brings along a story and a journey. Even if you know nothing about the wine, it has still been on a journey from the moment the vines were planted, to the way the sun shines on the grapes, to the people picking, pressing, and fermenting them to create a wine. All of those elements are inside the bottle when the wine is opened, but it doesn’t stop there.

Sometimes there are two journeys — the bottle’s journey and the one you bring with it. What is your connection to this particular bottle? Does it strike a memory when you open it? 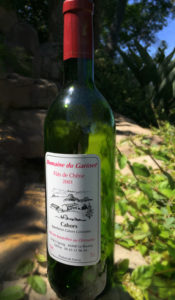 A few weeks ago, my husband and I celebrated our wedding anniversary by opening a bottle of 2001 Domaine du Garinet from Cahors, France. We visited this winery during a trip to France in 2011 and had a wonderful time talking to the husband and wife who owned and ran the winery. They showed us the vineyards, where they press the grapes, the fermenting tanks, etc. It was a delightful afternoon and it holds a special place in our hearts. We purchased a bottle that became treasured because of the memory involved in the occasion. As we were leaving the winery, we looked back at the couple and they were holding hands as they walked to their house. It was a beautiful final moment of our time there and has stayed with us ever since.

When we finally decided to open the wine a few weeks ago, we reminisced about the afternoon so many years ago and the bottle took on a new light. We loved that we had met the people involved in creating such a fantastic wine and we enjoyed our personal memory along with it — the time we spent chatting with them, the tour of the property, and the connection we shared. Because of this, we celebrated both journeys of the bottle that evening and it was a wonderful way to mark our wedding anniversary. 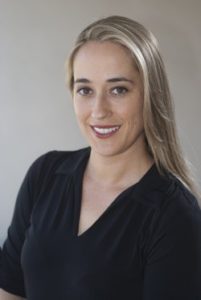 Nadine Nettmann, a Certified Sommelier through the Court of Master Sommeliers, is always on the lookout for great wines and the stories behind them. She has traveled to wine regions around the world including Chile, South Africa, Spain, Germany, and every region in France. When she’s not visiting wine regions or dreaming up new mysteries, her travel articles have appeared in AAA Hawaii, New Mexico Journey, Modern Luxury Hawaii, and Inspirato. Nadine is a member of Mystery Writers of America, Sisters in Crime, Romance Writers of America, and International Thriller Writers. She lives in California with her husband.

Snuffed Out by Valona Jones – Magic by Any Other Name – Guest Post + Giveaway
Murder, She Wrote: Death on the Emerald Isle by Jessica Fletcher and Terrie Farley Moran
Dial M for Meow by Ruth J. Hartman
The Case of the Parrot Loving Professor by Debbie De Louise – Spotlight & Giveaway
Sleuthing in Stilettos by Debra Sennefelder – Spotlight & Giveaway