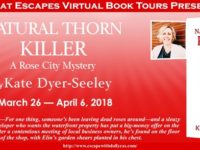 Cut down among the flowers…

Britta Johnston might be a late bloomer, but after leaving her deadbeat husband and dead-end job, she’s finally pursuing her artistic passion at her aunt Elin’s floral boutique, Blooma, in Portland, Oregon. It’s on the banks of the Willamette, in a quaint district of cobblestone paths and cherry trees. The wine bar featuring Pacific Northwest vintages is a tasty bonus, offering another kind of bouquet to enjoy. But things aren’t as peaceful as they look.

For one thing, someone’s been leaving dead roses around—and a sleazy real estate developer who wants the waterfront property has put a big-money offer on the table. Then, …