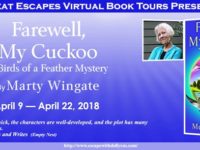 Julia Lanchester must defend her love nest from an invasive species: her boyfriend’s sister. And then there’s the little matter of murder…

“The cuckoo comes in April and sings its song in May. In June it changes tune and July it flies away.”

Wedding bells are ringing in the small British village of Smeaton-under-Lyme. Julia Lanchester’s second-in-command at the local tourist center is finally getting married, and the lovebirds are giving Julia and her live-in boyfriend, Michael Sedgwick, ideas about their own future. But before anyone can say “Will you,” Michael’s flighty older sister, Pammy, crashes the party, fresh off a breakup and lugging all her …