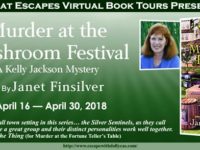 There’s a corpse among the chanterelles!

Redwood Cove Bed and Breakfast manager Kelly Jackson is hosting a cooking class during the Week of the Mushroom festival to attract guests, not drama. But soon after she finishes foraging for an edible mushroom species on sacred Native American land, a local newspaper reporter gets shot dead at the same site. With suspicions spreading like fungi in the quaint Northern Californian community over the culprit’s identity, Kelly and a savvy gang of sleuthing seniors known as the “Silver Sentinels” must uncover the truth about the secluded property before a tricky killer prepares another lethal surprise…