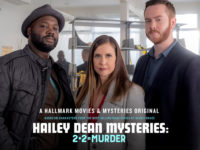 Hailey attends her niece’s school recital only to learn that the beloved music teacher has vanished. Hailey soon discovers several startling secrets amongst the staff, as well as a link between the missing young teacher and the school’s reconstruction funds.

END_OF_DOCUMENT_TOKEN_TO_BE_REPLACED

Single mom Eden Harwood has a lively daughter, a blooming business—and a juicy secret she’s hung on to for ten years. She doesn’t mind a bit that there’s no room for romance in her whirlwind life . . . until six-foot-in

finity, smoldery-eyed, bass-voiced Gabe Caldera reminds her of what she might be missing.

The principal of Hellcat Elementary is usually knee-deep in fawning PTA moms, but Gabe only has eyes for the fiery, funny, skittish redhead who barely knows he’s alive. But this ex-Navy SEAL never fails to get what he wants. And what he wants is to fan those sparks between him and Eden into the kind of bonfire you can see two counties …

END_OF_DOCUMENT_TOKEN_TO_BE_REPLACED

No one is more surprised than Lord North when he returns from war to find his ex-fiancee in his ancestral home…working as a governess in a sexy, fiery new Wildes of Lindow Castle romance by New York Times bestselling author Eloisa James…

The handsome, rakish heir to a dukedom, Lord Roland Northbridge Wilde—known to his friends as North—left England two years ago, after being jilted by Miss Diana Belgrave. He returns from war to find that he’s notorious: polite society has ruled him “too wild to wed.”

Diana never meant to tarnish North’s reputation, or his heart, but in her rush to save a helpless child, there was no time to consider the consequences of working as a governess in Lindow …

END_OF_DOCUMENT_TOKEN_TO_BE_REPLACED

After battling werewolves and evil aunties, Bryar Rose is ready to enjoy her new life. No more crazy aunties. Her curse is toast. And Bry’s new man, Knox, is literally a dream come true. Best of all, Bry will soon attend a regular high school. Forget those sketchy tutors! To get ready, Bry is dedicating the rest of her summer to some serious back-to-school shopping with her best friend, Elle. It’s a blast, except for one thing:

All these stalkers have oddly familiar scents and an uncanny …

END_OF_DOCUMENT_TOKEN_TO_BE_REPLACED 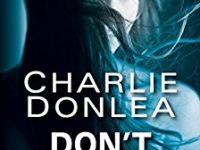 A Caribbean resort. A grisly murder. A documentary filmmaker looking for answers.

In the early ‘90s, John Grisham published a novel called The Firm. In it, a shadyMemphis law firm routinely flew its attorneys to Grand Cayman for long weekends, putting them up in the firm’s beachside condo and allowing the overworked lawyers some R&R. In reality, the firm was sending its best and brightest to the tropics to launder mob money.

The book’s island scenes were so fabulous that by the time The Firm finished selling seven million copies, Grand Cayman had morphed from a little-known island that was a mere sixty-minute flight from Miami, to one of the Caribbean’s most sought-after tropical destination. Behind the scenes, Cayman …

END_OF_DOCUMENT_TOKEN_TO_BE_REPLACED 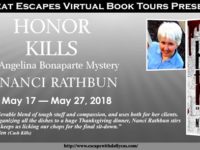 A missing husband. A suspicious obituary. She’s not the only one hunting down a dead man’s footsteps.

As a divorcee, Angelina Bonaparte knows firsthand the lengths some men will go to escape responsibility. When a worried mother wants the private investigator to track down her missing husband, she’s eager to bring the deadbeat dad to justice. But even after she discovers the man’s obituary, she refuses to believe it until she sees the body. Tracking down the nurse who last saw him alive could be the missing puzzle piece to her client’s broken family.

But as she digs deeper, she realizes there’s something darker at play …

END_OF_DOCUMENT_TOKEN_TO_BE_REPLACED 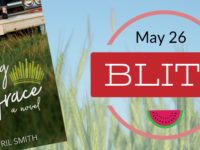 Grace Summer lands herself in a melon load of trouble when she becomes torn between the boy of her dreams and the boy almost next door.

As the newly crowned Watermelon Queen, she is thrust into the spotlight, meets the dreamy Warren Hartley, and continues trying to get over an accident that rocked her world. Mix in working with Beau Baron who Grace happens to fight with just about as much as breathing and the metaphorical sparks fly.

Like most things in life, Grace must learn to take the good with the bad. While the good is the handsome and fun Warren Hartley, the bad is Beau Baron—or at least being …

END_OF_DOCUMENT_TOKEN_TO_BE_REPLACED 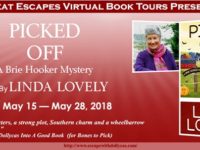 Picked Off by Linda Lovely
A Brie Hooker Mystery #2

It’s been seven months since Brie Hooker, a vegan, moved to Udderly Kidding Dairy to live with her feisty Aunt Eva, a confirmed carnivore.

But tonight there’ll be no family feud over dinner entrees.

Udderly’s hosting a campaign fundraiser for Eva’s best friend, who hopes to be South Carolina’s next governor. The candidate’s son, a pro quarterback, is flying home for the wingding. And Brie’s eager to get a close-up view of the cute tush she’s admired on TV, even though she’s reluctantly sworn off even more tempting local beefcake.

The campaign fundraiser promises to be a huge success until a pitchfork attack turns the goat farm into a crime scene—again.

END_OF_DOCUMENT_TOKEN_TO_BE_REPLACED

All work and no play make Jade a dull girl.

Jade Burt can do without her grandmother’s meddling in her love life. But when Millie finds an abandoned baby possum, it leads her to Caleb Young. Caleb would be perfect for Jade! When Jade meets Caleb, it’s hard to argue with her grandmother’s choice. Still, Jade is determined to push Caleb away, …

END_OF_DOCUMENT_TOKEN_TO_BE_REPLACED

This information is brought to you by Evgie Wall Decals. All opinions are my own. Blogger is not responsible for fulfilling the prize.

With a baby on the way, I’ve had cute nursery themes on the brain. One awesome idea to make your baby’s room unique is to have an accent wall with some cute, fun wall decals. I think the hardest part will be deciding which ones to choose! There are so many cute ones available from Evgie Wall Decals.

If you have been thinking about decorating a room or a baby’s nursery, your first stop should be Evgie Wall Decals! They have amazing illustration in all prices ranges. Their sets …