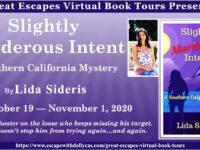 There’s a shooter on the loose who keeps missing his target. But that doesn’t stop him from trying again…and again. It’s up to Corrie Locke, rookie lawyer and spunky sleuth, to find the gunman before he hits his mark, Assistant Deputy D.A. James Zachary, Corrie’s hunky and complicated frenemy.

When Corrie is stuck with more questions than answers, she enlists a team with various strengths, from weapons to cooking skills, to help her find the shooter. Her computer whiz boyfriend Michael is onboard. So is former security guard Veera. Toss in an over-the-hill informant and a couple of feuding celebrity chefs and Corrie’s got her very own A-Team. Okay, maybe …