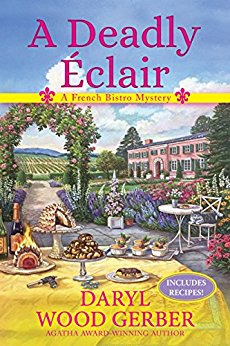 It’s always been Mimi Rousseau’s dream to open her own bistro, but it seems beyond her grasp since she’s been chased back home to Nouvelle Vie in Napa Valley by her late husband’s tremendous debt. Until her best friend Jorianne James introduces her to entrepreneur Bryan Baker who invests in promising prospects. Now, working the bistro and inn until she’s able to pay it off and call it her own, Mimi is throwing the inn’s first wedding ever.

The wedding will be the talk of the town, as famous talk show host Angelica Edmonton, daughter of Bryan’s half-brother, Edison, has chosen the inn as her perfect venue. Anxious, Mimi is sure things are going to turn south, especially when Edison gets drunk and rowdy at the out-of-towners’ dinner, but by the evening, things begin to look up again. That is until six AM rolls around, and Bryan is found dead at the bistro with an éclair stuffed in his mouth. And the fingers point at Mimi, whose entire loan is forgiven in Bryan’s will.

Now it’s up to Mimi to clear her name and get to the bottom of things before the killer turns up the heat again in A Deadly Éclair, the scrumptious series debut by Agatha Award-winning author Daryl Wood Gerber.

Also by this author: A Sprinkling of Murder

As our traveling feast continues, it’s time for soup. Do you love soup? I’m not big on cold soups, but I adore hot soups. I don’t get to eat soup out at restaurants very often because there are so many that are made with a roux (or gluten). That doesn’t mean I can’t cook them at home.

Since we’re still celebrating the upcoming release of the first of the French Bistro Mysteries, A DEADLY ÉCLAIR, on our tour, I thought I’d share an onion soup I make with Camembert cheese rather than the typical Gruyère cheese. Of course, the soup is loaded with onions.

FYI, I’m turned on by aromas. If I can’t rum up the aroma of cookies and bread in my house, it’s got to be onions.

I do think my protagonist Mimi could incorporate this soup nicely into her menu. This recipe is gluten-free, but if Mimi (or you) want, it can be served with a thick slice of toasted bread. 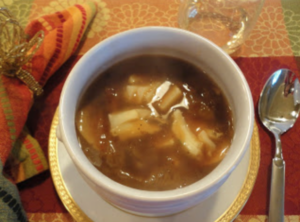 
In a large saucepan, melt the butter over low heat. Add the onions and coat well with the butter. Cover and cook until tender, about 20-30 minutes, stirring occasionally.

Remove the cover and raise the heat a bit. Sauté stirring often. Do not let the onions burn. They will turn a deep caramel brown, about 30 minutes to one hour.

Add the mushrooms and stir them with the buttery onions for about 2 minutes.

Add the stock and bay leaves, sprinkle with salt and pepper. Bring to a boil. Reduce the heat and cover. Simmer for about 15-30 minutes more.

Discard the bay leaves. Taste the soup and add salt and pepper to your liking.

Ladle the soup into bowls and add cheese. It melts instantly!

FYI, if you missed the first few days of this tour, here is a quick blurb about A DEADLY ÉCLAIR.

Mimi Rousseau is throwing the bistro’s first wedding—the nuptials of a famous talk show host. She is sure things will go awry when the bride’s father shows up drunk to the out-of-towners’ dinner. By the end of the evening, things look sweet again…until the next morning, when her benefactor is found dead at the bistro with an éclair stuffed in his mouth. All fingers point at Mimi, whose loan is forgiven if he dies. It’s up to her to éclair—er, clear—her name before the killer turns up the heat.

A Deadly Éclair by Daryl Wood Gerber is the first book in her newest cozy mystery series, and I was so excited to have a chance to read it. If you’ve read my blog for any length of time, you know that I love all of Daryl’s books. She is one of my go-to authors, whether she is writing as Daryl Wood Gerber or Avery Aames. I have enjoyed her cozy mystery books and her more suspenseful titles outside of the cozy genre. I know that when I’m picking up one of her books, I better just tuck in for the evening, because I’m not going to want to stop reading.

In this first installment of the French Bistro Mystery series, we are introduced to Mimi. Mimi is working to pay off her bistro and inn and is hosting a wedding. She finds herself a prime suspect in the murder of her benefactor and must work to clear her name. This fresh new cozy had all the elements I love: an easy-to-relate-to amateur sleuth; a great setting; and a believable mystery. Ms. Gerber has another winner on her hands…and I can’t wait for the next French Bistro Mystery!

I’m offering a giveaway every day of this traveling feast. To enter, tell me today—soup or salad?

BY THE WAY, don’t miss out on the French Bistro-themed BOX I’m giving away on my Facebook Author page. Link below.

Agatha Award-winning Daryl Wood Gerber is best known for her nationally bestselling Cookbook Nook Mysteries and CHEESE SHOP MYSTERIES, which she pens as Avery Aames. She will soon debut the new French Bistro Mysteries. Daryl also writes stand-alone suspense: DAYS OF SECRETS and GIRL ON THE RUN. Fun tidbit: as an actress, Daryl appeared in “Murder, She Wrote.” She loves to cook, and she has a frisky Goldendoodle named Sparky who keeps her in line!