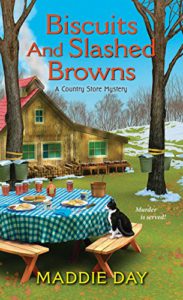 For country-store owner Robbie Jordan, the National Maple Syrup Festival is a sweet escape from late-winter in South Lick, Indiana—until murder saps the life out of the celebration…

As Robbie arranges a breakfast-themed cook-off at Pans ‘N Pancakes, visitors pour into Brown County for the annual maple extravaganza. Unfortunately, that includes Professor Connolly, a know-it-all academic from Boston who makes enemies everywhere he goes—and this time, bad manners prove deadly. Soon after clashing with several scientists at a maple tree panel, the professor is found dead outside a sugar shack, stabbed to death by a local restaurateur’s knife. When an innocent woman gets dragged into the investigation and a biologist mysteriously disappears, Robbie drops her winning maple biscuits to search for answers. But can she help police crack the case before another victim is caught in a sticky situation with a killer?

My latest Country Store Mystery takes place during the National Maple Festival in Brown County, Indiana. Wait, you say – they make maple syrup in Indiana? Isn’t that what happens in Vermont in March, and in Quebec?

It turns out southern Indiana is a pretty good place for sugar maples and that lovely sweet sap that runs in their veins when the days warm up. According to the Brown County Democrat, “geographically, Indiana holds the farthest southern and western position in the United States’ Maple Sugar Belt, meaning as winter gives way to spring, the sap flows first in Indiana’s maple stands.”

Brown County is the state’s most densely forested county and has a wide range of sugar maples. The National Maple Festival is a real thing, which the county decided to sponsor to boost tourism in a normally too-quiet time of year. They have activities for children, demonstrations at a sugar shack (where they boil down the sap to make syrup), a demonstration of native American methods of sugaring off, and more.

I decided to fictionalize the festival in my book, with a maple-themed breakfast cook-off in Robbie Jordan’s country store restaurant, Pans ‘N Pancakes. I added an academic conference on maple tree science taking place at the same time. As far as I know, no one has ever been murdered during the real National Maple Festival, and I hope it stays that way! 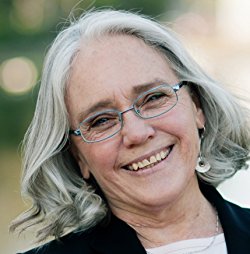 My website, edithmaxwell.com, includes information about all my writing, including my historical Quaker Midwife Mysteries, my other contemporary series, and my award-winning short stories. Please stop by, and sign up for my newsletter, too. You can also find me at the following links:

Bio:
Edith Maxwell is a 2017 Macavity and Agatha Award nominee and has also had several short stories nominated for an Agatha. She writes the historical Quaker Midwife Mysteries and the Local Foods Mysteries. Under the pseudonym Maddie Day she writes the Country Store Mysteries and the Cozy Capers Book Group Mysteries. Her award-winning short crime fiction has appeared in many juried anthologies. She is honored to serve as President of Sisters in Crime New England and as co-chair of the New England Crime Bake in 2018 and 2019.

A fourth-generation Californian and former tech writer, farmer, and doula, Maxwell now writes, cooks, gardens, and wastes time as a Facebook addict north of Boston with her beau and two cats. She blogs at WickedCozyAuthors.com, Killer Characters, and with the Midnight Ink authors.