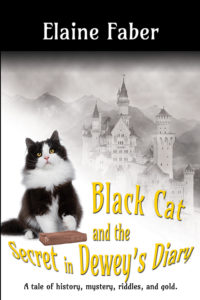 In this dual tale of mystery, lost treasure, and riddles, while Black Cat narrates the exciting events in Fern Lake, Kimberlee discovers a cryptic clue in a diary about a hidden treasure, and heads to Austria to solve the puzzle.

When Kimberlee and Dorian arrive in Austria, they attract the attention of a stalker determined to steal the diary in hopes the clues will lead him to the treasure first. On a collision course, it is inevitable that Kimberlee and the stalker meet in Hopfgarten.

Black Cat and Angel’s lives are endangered with the arrival of Kimberlee’s grandmother in Fern Lake, and the return of a man presumed dead for twenty-five years. With both arrivals, emotional and financial difficulties loom for Kimberlee’s family. Since their return to Fern Lake, Angel seems reluctant or unable to adjust to her new home. Does she regret leaving Texas and Grandmother? And, when the opportunity arises, will she decide to leave Black Cat and Fern Lake?

Black Cat Finds Dewey’s Diary
Elaine Faber
The following is an ‘edited’ excerpt from Black Cat and the Secret in Dewey’s Diary.Black Cat and his soulmate, Angel, come across a WWII soldier’s diary at Kimberlee’s bookstore that will send her to Austria, following a clue to a lost treasure.

Black Cat stood at the door and gazed into the storeroom. Boxes, parcels and baskets lined the shelves. Angel sniffed at an unopened parcel. Sometimes Kimberlee got books from other bookstores or from auction houses. “What’s this? It smells musty. Why would someone mail a musty package to a bookstore?”

Kimberlee walked into the storeroom where Angel pawed at the parcel on the worktable. “What have you got there, Angel?” She picked up the package. “Oh, it’s probably that book I ordered.” She cut the tape on the package with a pair of scissors. “Might as well get it logged in and priced.” The brown wrapping paper fell away and a worn journal lay on the table. Kimberlee frowned. “Oh, this isn’t what I thought I bought. Good thing it didn’t cost much.” She thumbed through the book. “I thought it was a book written by a WWII American soldier on the battlefield. This looks more like a personal diary.” She tossed it on the table, and turned away.

Angel pawed at the book. “Make her look at it, Black Cat. There’s something important inside.” She kneaded the table with her front feet.

“I sense something important in the diary. Kimberlee needs to read it. I feel it in my bones. Make her read it.”

“How am I supposed to do that? I can’t exactly twist her arm.” Black Cat sat back on his haunches, his tail switching from side to side over the table edge.

“I know you can do it. You’re so clever and handsome and…and…brave.” Angel rubbed against Black Cat’s face. A purr rumbled in her chest.

“So, now I’m handsome and clever. A minute ago, you called me a conceited pretty boy.”Why did Angel think it was so important? What mystery did it hold for Kimberlee?

Black Cat pawed at the book. It fell and plunked onto the floor, open to the title page.

He held his breath as Kimberlee turned. She knelt, picked up the diary, opened it, and started to read.

The clues inside will send Kimberlee on a journey to a foreign land. Travel with her through Austria and Germany as she experiences the beauty and majesty of the country, and outsmarts a devious stalker who will stop at nothing in an attempt to reach the treasure first.

Black Cat and Angel face their own trials as a man, presumed dead, and an evil relative return to Fern Lake, determined to bring financial and emotional drama to Black Cat’s family.

As you follow the two halves of the tale, this dual story, narrated by Black Cat in Fern Lake, and Kimberlee in Austria, will delight and entertain, until the adventure comes together in an exciting conclusion at the end. 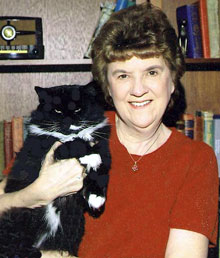 Elaine Faber lives in Northern California with her husband and feline companions. She is a member of Sisters in Crime, California Cat Writers, and Northern California Publishers and Artists. She volunteers with the American Cancer Society Discovery Shop. She enjoys speaking at public venues, sharing highlights of her novels. Her short stories have appeared in national magazines and multiple anthologies.

Black Cat and the Lethal Lawyer, Thumper accompanies his family to a Texas horse ranch where they confront wild horses, embezzling, false identities and attempted murder.

Mrs. Odboddy-Undercover Courier, Mr. O carries a package by train to President Roosevelt that she presumes are secret war documents. She is equally sure Nazi spies are after her package and will to anything to deliver the package to the president.

Mrs. Odboddy-And Then There was a Tiger, Falsely accused of various crimes, Agnes sets about to restore her reputation and missing war bond money.