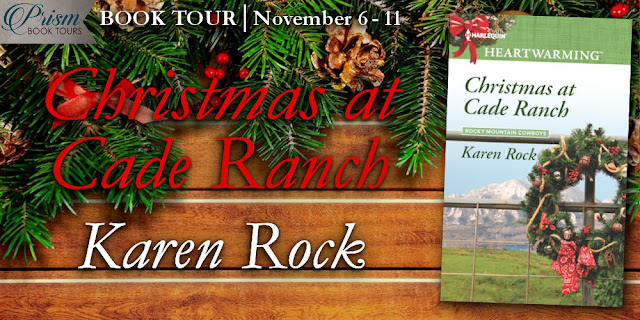 The Christmas they never had.

James Cade has one priority: keep the family ranch running smoothly in the wake of his younger brother’s death. With Jesse’s ex, Sofia Gallardo, and her young son, Javi, stranded at Cade Ranch over Christmas, this task just got a lot harder. The longer Sofia and Javi stay, the harder it is to imagine the ranch without them. James couldn’t save his brother from his inner demons, but he can give his nephew a secure future. Maybe more—if he can figure out how to trust Sofia, and stop feeling like he’s betraying Jesse. Because trying to stop thinking about beautiful, determined Sofia is impossible.

James encircled Sofia’s waist and her head tipped back. He brought his lips close and the warm, sweet curls of his breath brushed against her skin. “You’re beautiful.”

“No.” She pressed her eyes closed.

“Yes,” he insisted and then a strange thing happened. Instead of kissing her, he guided her down next to him on the couch.

Lifting her hand, he brushed her fingertips with his lips in a delicious caress that traveled in an electric rush to her toes. Then his mouth trailed to the inside of her wrist and lingered at the vulnerable spot, making the flesh over her bones shake.

“You smell good,” he murmured against her skin.

As he kissed his way up her forearm, her breath grew labored, the air impossible for her lungs to hold, as she responded to his gentle onslaught. When his mouth stopped on her track marks, she stiffened against him, hating the reminder of who she’d once been. Not the kind of woman who should be with a man like James. An upstanding man who’d never made any real mistakes in life, not like her, not like she still could…

“These are beautiful,” he whispered against her scarred skin before kissing there. His lips paid homage to every ridge as though they were precious to him and her heart clenched along with the rest of her, in an agony of want and of wishing for what could never be.

“James,” she protested. She lifted her lids and glimpsed the top of his dark head bent over her. He rolled his eyes up without lifting his face and the disoriented heat in them made her unravel, too. This undone James was ten times harder to resist than his usual controlled self. “Don’t.”

He sat up, swept his arm around her shoulders and guided her against the warm, muscular length of his chest. His heart hammered against hers. “Don’t what?”

“How about here?” he murmured before his lips claimed hers in a joining so sweet she nearly cried. The teasing pressure drove her wild and she opened her mouth, allowing his tongue to glide over hers in a slow rub that singed her. She couldn’t get enough of the earthy-spicy taste of him.

He kissed her ardently and pressed her back against the couch, lifting her legs so they lay beside him. Her nightgown rose slightly and her knee brushed against the smooth, worn denim covering his leg. Every drop of her blood rushed in her veins where they beat beneath the surface of her heated skin.

The world spun when he left her lips to sample her neck and then lower, sliding down its length to the hollow valley at the base of her throat where his tongue smoothed over her thrumming pulse. Her fingers bore into his shoulders. When her body arched against his, his low groan vibrated against her skin.

She was losing control, but what scared her more was that James, the voice of reason, logic, order, seemed to have completely lost his as well. 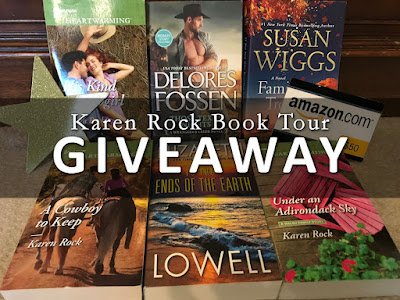 – 1 winner will receive a $50 Amazon gift card along with print copies of HIS KIND OF COWGIRL, UNDER AN ADIRONDACK SKY AND A COWBOY TO KEEP by Karen Rock, TO THE ENDS OF THE EARTH by Elizabeth Lowell, THOSE TEXAS NIGHTS by Delores Fossen and FAMILY TREE by Susan Wiggs.– US Only.